Here is what you need to know about the new immersive Monet exhibit | TRNTO.com
Skip to content 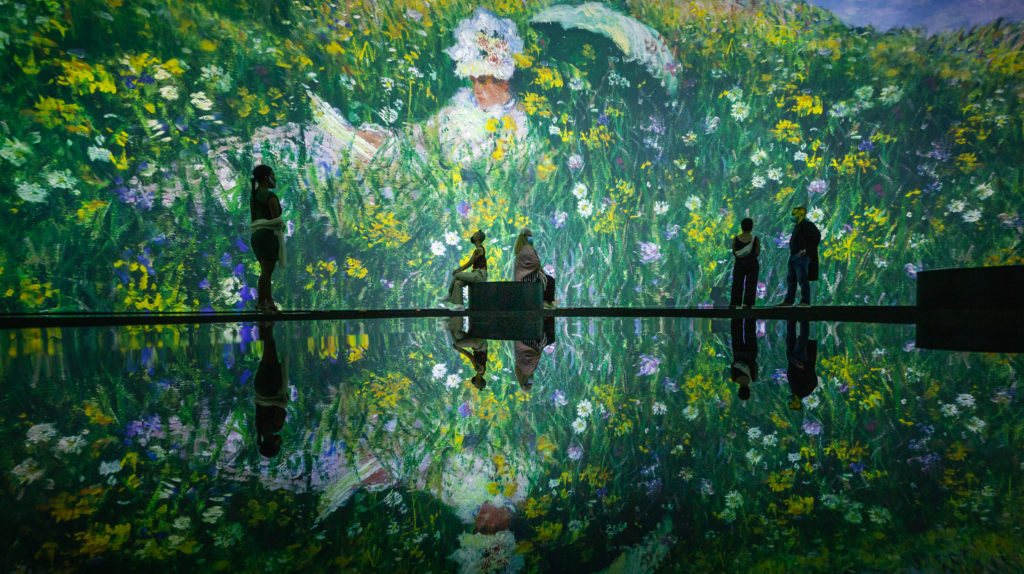 Featuring an original score, the 50,000 square feet space is immersed in Claude Monet’s works moving across every surface of the room, from floor to ceiling. Over 400 paintings are displayed, including the Water Lilies series, Impression: Sunrise and Poppies.

The exhibit includes three sections: the Garden Gallery, the Prism, a light-filled tunnel that leads to the biggest area, the Infinity Room. This room is shaped like an oval, modeled after the Musée de l’Orangerie in Paris, which was specifically designed for Monet’s works.

Mathieu St-Arnaud is the creative director of Normal Studio in Montreal where the exhibit was created. St-Arnaud said the idea of the installation was to retrace Monet’s footsteps.

“During his whole career, he actually tried to paint the light. That was his subject. He was on a journey to find this light and he tried to paint it,” St-Arnaud said. “So we decided to follow in his footsteps and rediscover light ourselves.”

“Beyond Monet” took about six months and a team of 25 people to create, according to St-Arnaud. He said that not having access to Monet’s original paintings presented a challenge.

“It took around three months to actually do the research and talk with different museums, different agencies, to have access to the digital rendition of the original paintings,” St-Arnaud said.

Art historian Fanny Curtat who worked with the creative team of “Beyond Monet” added that not having the original paintings allowed the team to be more creative with movement, light, and composition.

Curtat said the immersive experience is an opportunity for people to connect with art.

“When a lot of people think about museums, they are oftentimes intimidated or a lot of people might think it’s not for them,” Curtat said. “When you have an immersive experience,  you have the possibility of creating a different connection between the audience and the artwork. Instead of going to see the works, the works come towards them.”

She said that it’s easy to overlook Monet’s work because it consists of landscapes and forests. But Monet was innovative. During his time, artists painted in studios, using artificial lighting and focused on historical subjects, according to Curtat.

Guests can purchase tickets at www.monettoronto.com. The prices start at  $39.99 for adults and $29.99 for children.