In awe of a rare stage talent | TRNTO.com
Skip to content 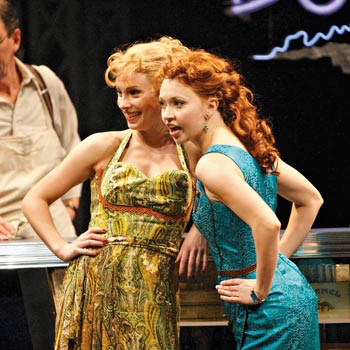 LAST SUMMER AS the retirement savings of most Canadians crumbled in value, the marvellous, brilliant and then 71-year-old British playwright Tom Stoppard admitted in an interview that he had a case of “playwright’s block.”

“So much is in the foreground now, huge important subjects,” Stoppard said at the time. “‘Shall I do global warming or shall I do Iraq? Maybe I’ll do Afghanistan,’ and nothing gets written.”

Thank heavens, this was announced just after his latest play Rock ’n’ Roll had moved from an award-winning run in London to a wildly praised (but abbreviated, due to a stagehands’ strike) run on Broadway. I can hardly wait to see what Canadian Stage will do with it during its first Canadian production running at the Bluma Appel Theatre from Sept. 28 to Oct. 24.

I have long felt that Stoppard is the finest playwright of the past several decades. His Arcadia stunned me on Broadway and in Toronto. He uses words and arguments like Picasso uses paint, and what he has been most criticized for has been “all head, no heart.” Not so with Rock ’n’ Roll, which has been described as “so flush with feeling that it never seems to stop trembling.”

His latest play is filled with recordings of Pink Floyd, the Grateful Dead and the Rolling Stones, as well as the Plastic People of the Universe, a very important and politically “dangerous” (and real) Czech rock band. It is, quite simply, about love, revolution and ’60s music. It is also about the utopian faith that so many millions of intellectuals around the world had in communism, from Lenin to Stalin and beyond, before it all collapsed in the late 1980s.

The production stars Kenneth Walsh and the wonderful Fiona Reid, and with Donna Feore’s steady hand on the directorial reins, this production is a fine, theatrical blast to begin the season.

I can promise you — even if the CanStage production is not excellent — that this will be an unforgettable evening of theatre. Stoppard has that effect on those who listen to and treasure his wit, insight and passion.

A Funny Thing Happened on the Way to the Forum is minor Sondheim, but the uproarious book by the witty Shevelove and Gelbart (you’ve heard of M*A*S*H?) makes for a joyous, laugh-filled evening of fine farce and witty lyrics. Des McAnuff ’s direction is a scream.

The Importance of Being Earnest is one of the funniest comedies of all time and this production does it great justice.

West Side Story is as perfect as you have heard. The magnificent leads, Chilina Kennedy and Paul Nolan; the astonishing dancing; the magical Bernstein-Sondheim score, this is Stratford — and musical drama — at its best. Bravo.

Allan Gould has been Post City’s theatre critic for eight years. A National Magazine Award winner, he has numerous books to his credit including Canned Lit and First Stage: The Making of the Stratford Festival.