In search of the wizards of Oz | TRNTO.com
Skip to content 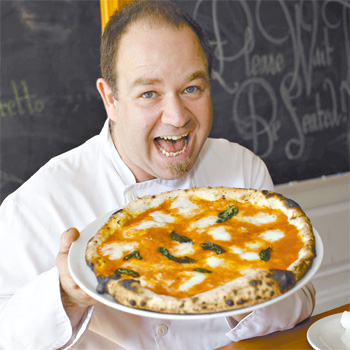 THE OSSINGTON STRIP is a culinary melting pot that has exploded in popularity, drawing some of the city’s finest young chefs to the area, including Tom Thai and Paul Boehmer. But how to separate the bistros from the booze cans? Herewith, a guide to nine of the best culinary destinations to help plan your trip.

Böhmer goes back to basics

Esteemed local chef Paul Boehmer follows his nomadic impulse and helms yet another restaurant, this time in a 5,000- square-foot former garage.

Boehmer is known for transforming whatever he touches to edible gold — from falloff- the-bone ribs at the late Cluck, Grunt & Low to posh nosh at Rosewater Supper Club, Scaramouche and others.

And foodies have been holding their garlicky breath ever since the venture was announced last spring.

While Böhmer is slated to open within the next month, at press time the restaurant was still in renovation mode.

Boehmer has already been blessed with luck as the last liquor licence recipient before a oneyear moratorium on the barheavy half-kilometre stretch between Queen and Dundas, and we don’t expect the seasoned chef’s good fortune to end there.

Classic Canadiana fare, such as Ontario pickerel and caribou; promises of reasonable prices ($10 to $20 for appetizers, $20 to $30 for mains); local art and photography; and a rustic 100- seat space filled with furniture designed by the funky, reclaimed wood–happy Brothers Dressler twins are sure to keep the place packed and profitable.

During the day, bread, preserves and vinegars will be sold, cheering up disgruntled locals who bemoan the parity of daytime hangouts in the buzzy ’hood.

Oh, and don’t scoff at the classy new umlaut in the eponymous restaurant’s name: it’s Boehmer’s original surname (his father traded the dots for an “e” upon arriving in Canada) and is simply another sign of this epicurean icon getting down to his roots.

Gooey made-to-order chocolate chip cookies arrive with an organic glass of milk and inspire nostalgia for bygone childhoods and simple delights. Leslie Feist and her Broken Social Scene friends have been known to pull up a chair.

The vibe at this no-reservations Neopolitan pizza joint is almost as hot as it’s 900-degree woodburning oven.

Aim for an unconventional arrival time (think 6 p.m. on a Tuesday) or slip the hostess your cell number and grab a tequila cocktail at nearby Reposado to avoid spending hours in line. Entrance hassles are soon forgotten with a couple glasses of $4 wine and Libretto’s trademark blistered pie.

Foodies were initially disappointed when they learned that revered chef Tom Thai wouldn’t be concocting his famous avant-garde sushi at Foxley.

Once they tucked into the resto’s exquisite fare, however, patrons (including down-to-earth screen sirens Sandra Oh and Rachel McAdams) were instantly converted to his small-in-size yet big-in-flavour modern pan-Asian tapas. Standout dishes include sticky side ribs with caramelized shallot glaze and sea bream ceviche with yuzu and shiso leaf.

Exposed brick walls, mod light fixtures and attentive staff would make this the perfect date spot — if only they accepted reservations.

State of the Union

Union was worth the wait. After a beleaguered year of delays and red tape that foodies followed on chef Teo Paul’s blog for Toronto Life, the locavore restaurant was greeted with accolades for its Parisian-inspired food (many ingredients sourced from his family’s Collingwood farm), not to mention the casually glam digs, punctuated by a horseshoe bar and 35-foot vine mural by Barbara Klunder.

True to its name, this handsome wood-panelled restaurant offers 12 different kinds of burgers as well as yummy sides like hand-cut fries and chorizo-topped poutine.

BQM boasts that their beef patties contain higher levels of omega-3s than conventional beef products — maybe that’s why they’re so juicy and delicious. Get local with the Ossington, a portabello mushroom, mozzarella and balsamic reduction–dressed affair.

The Dakota for bluegrass brunch

Most nights, mustachioed indie kids and their vintage-clad girlfriends sling whisky sours in boot-shaped glasses, chow down requisite pub grub, and get down to the live bluesy rock bands.

Save room for the lime-spiked avocado and chocolate mousse for dessert.

What this decidedly plain Vietnamese restaurant lacks in decor it makes up for in flavour and affordability, making it ripe for celebrity chef sightings (Guy Rubino, Claudio Aprile and Susur Lee are devotees). And for good reason: the unpretentiously named pho #1 is arguably the best in the city.

Rare beef cooks in a complex broth that’s topped with fresh basil and bean sprouts. Vermicelli noodles (a.k.a. bun) arrive with all sorts of tasty topping combos, from deep-fried spring rolls and grilled pork to beef and pineapple. Lingering is not encouraged.