Inside the Table Hockey League of Toronto | TRNTO.com
Skip to content 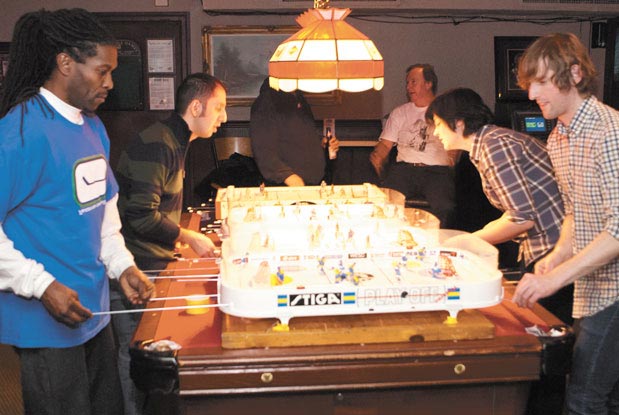 Deep in the heart of Corktown, a small group gathers once a week to celebrate a great Canadian pastime. Some in this group are lifelong devotees with quick reflexes and polished skills. Others come to rediscover a game they loved when they were young. A few are discovering it all for the first time. But they all come together to take part in a cultural tradition that is bigger than all of them — table hockey.

“Our particular league only meets during the winter,” says Eugene Kurtz, president and founder of the Toronto Stiga Table Hockey League. “We play on an 82-game schedule, just like the NHL.”

The group meets every Wednesday near Queen and Bayview to play a handful of games on the Swedish-made Stiga tables, which feature hard, wax-made figurines, as opposed to the paper-made players found on some Canadian tables. The crowd, Kurtz says, is “eclectic.”

Surprisingly, there is more than one table hockey league in town as well as the annual Toronto Classic Table Hockey Championship, which was founded at the University of Toronto in 1999.

“We have directors, teachers, accountants, IT guys and, this year, two women,” says Kurtz.

Earlier this year, the TSTHL hosted the Toronto area’s first sanctioned table-hockey tournament. The event drew not only a large group of locals, but a number of internationally ranked players from Denmark, Germany and the U.S, who take table-hockey well beyond the beer-leagues. Some travel to as many as 20 international tournaments in a season and play by the International Table Hockey Federation’s exacting rules. Big tournament winners, Kurz says, make a substantial amount of money.

But nostalgia and a bit of old-fashioned bonding is still the TSTHL’s biggest draw.

“Ninety per cent of our the participants just come to test their skills…because they’ve only ever played against their brothers or their friends,” Kurtz explains. “But those Danish players…they play for prestige and money.”