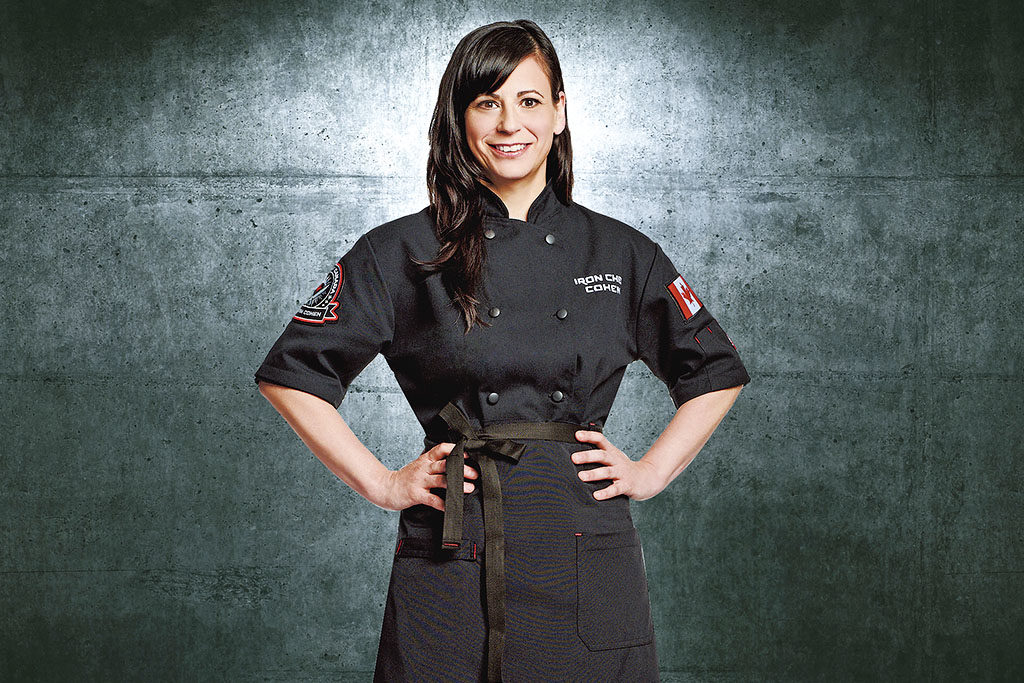 When Amanda Cohen walked onto the stage of Iron Chef Canada this summer in Toronto, it wasn’t her first time in Kitchen Stadium. But it felt like it.

“That first battle was as terrifying as being a competitor,” she says. “There are a lot of people just looking at you, expecting you to do well. It’s pretty damned exciting.”

In 2010, she went up against the legendary Iron Chef Masaharu Morimoto as a competitor chef in a vegetable battle on Iron Chef America. She was the first vegetarian chef on the TV show, but the three judges deemed that Morimoto’s cuisine reigned supreme.

Cohen vowed never to return, at least as a competitor chef.

Which is why the owner-chef of New York’s much-loved Dirt Candy has instead returned as an Iron Chef on the Food Network. She’s one of five celebrated Canadian chefs to don the black jacket in the first season of Iron Chef Canada, joining Lynn Crawford, Susur Lee, Rob Feenie and Hugh Acheson, as they compete against culinary challengers each week.

Another reason Cohen said yes to returning was that she thought she could win.

“When they asked, I’m like, ‘It’s been almost nine years. I think I’m a chef that could possibly win even going against an Iron Chef. I’ve certainly grown.’ ”

Raised in Toronto, Cohen became a vegetarian as a teenager (she isn’t one now) and later moved to New York for university. She went to culinary school, too, and worked mostly in vegetarian restaurants; although, she did spend two years frying chicken wings at a Harlem diner.

The spark for her own vegetable-forward restaurant really came during a dinner with her parents at a chic New York eatery. The chef promised her a “grand vegetarian tasting,” but it was just salad after salad.

She vowed to do better and did, opening Dirt Candy in the East Village in 2008. The tiny 18-seater was all about putting the vegetable front and centre. But it wasn’t your standard vegetarian restaurant; it wasn’t about those politics or that lifestyle. It was all about the food and not being boring.

There was nothing like it in New York at the time, and Dirt Candy quickly became one of the hardest restaurants to get into in the city (they famously turned away Leonardo DiCaprio).

“I think I’m a chef that could possibly win even going against an Iron Chef.”

Over the next seven years it became the first vegetarian restaurant in 17 years to receive two stars from the New York Times, was recognized by the Michelin Guide five years in a row and has won awards from Gourmet Magazine, the Village Voice and others.

In 2015, Cohen moved Dirt Candy into a bigger space on the Lower East Side and made headlines by eliminating tipping, adding a 20 per cent administrative charge to each cheque instead and raising the salaries of all of her staff.

Accolades continue to roll in. This year alone, New York Magazine named it the “Absolute Best Restaurant on the Lower East Side,” and Wine Enthusiast named it one of the 100 best wine restaurants in America.

Instead of the à la carte menu of the early days, the choice at Dirt Candy is now between two tasting menus — The Vegetable Patch and The Vegetable Garden — which have included everything from shanghai shoots with fermented black beans and crème fraîche, to portobello mousse with sautéed Asian pears, cherries and truffle toast, to brussels sprouts tacos with lettuce wrappers.

As acclaimed as her food is, she told a New York Times blogger in 2012 that she got “a lot of grief” for not being a traditional vegetarian restaurant.

“It’s definitely levelled out,” she says, “but we definitely have some people who expect us to fit more into a traditional vegetarian mould,” which for Cohen is often brown rice, steamed vegetables and not a lot of flavour.

The great leveller has been time, she says. With all of that attention came more people who know what Dirt Candy is all about.

Cohen admits that all of that attention can still be pretty intimidating.

“But we kind of just put our heads down and do what we do here. We just want to be better than the day before.”

She and her sous chefs used a similar strategy during their three episodes of Iron Chef Canada this summer. After walking into Kitchen Stadium for that first episode and experiencing all of that terror and excitement, they hit their groove, says Cohen.

“By the time we walked in the second time and third time, it was like, ‘Oh, we’re home. This is our kitchen.’”