Is Eglinton the next Bloor Street? | TRNTO.com
Skip to content 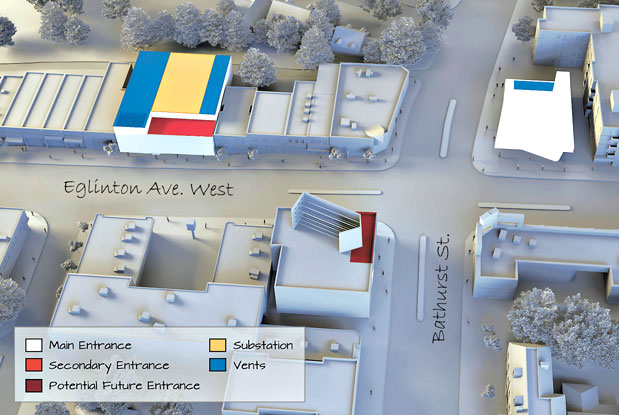 Maureen Sirois walks down Eglinton Avenue on a sunny Saturday afternoon, past the clothing shops, butcher and bakery to her own store next to the Eglinton Grand theatre, pointing out the changes she hopes to see in the neighbourhood. That the city’s Toronto Parking Authority (TPA) is eyeing the Green P lot in behind that stretch for redevelopment is a sign of what’s to come.

Sirois is chair of the Eglinton Way Business Improvement Area (BIA), representing businesses on and around the street from Chaplain Crescent to Oriole Parkway. The neighbourhood will be host to two stops on the coming Eglinton-Scarborough Crosstown light rail transit (LRT) line, something she knows will alter both the look of the neighbourhood and the relationship it has with the rest of the city — and she can’t wait.

Metrolinx, the provincial agency handling transit development in the region, plans to have the crosstown finished by 2020. The line will bring rapid transit to Eglinton Avenue West from Kennedy subway station to Black Creek Drive, eventually reaching all the way to Pearson International Airport.

Sirois and her fellow BIA directors hope the line will mean new developments in the neighbourhood and a fresher streetscape, with new sidewalks and better parking, maybe even buried hydro wires.

For Jennifer Keesmaat, Toronto’s chief planner, the Eglinton-Scarborough Crosstown LRT line means a chance to start building the kind of main streets the city will need in the future.

“Eglinton, in many ways, is our opportunity to get it right,” she says, “linking pedestrians, cars, bikes and on-street parking.”

The crosstown marks the first rapid transit of any kind for many communities along the street. But even parts of Eglinton near the Yonge-University-Spadina subway line are in for big changes, says Keesmaat, because the accessibility of an LRT opens them up to new development.

Take, for instance, the area surrounding Eglinton West subway station at Allen Road, a location particularly important to urbanist Keesmaat, as it’s where the Spadina Expressway was halted in the early ’70s. The crosstown will free up space as fewer buses run from the station onto Eglinton. Keesmaat says the nearby land, which the city owns, can be converted into a community hub. “You can imagine turning it into a node … and adding residential and other kinds of uses in close proximity.”

“Eglinton, in many ways, is our opportunity to get it right.”

Eastward to Bathurst Street, however, is a different story. With the group of shops established there, Keesmaat says the challenge will be protecting the area’s character in the face of new development. That development needs to come, she says, to add density to the area and make sure there are enough people using the crosstown to make it worthwhile.

TPA has yet to hear from any developers about the Green P in behind the Eglinton Grand, president Lorne Persiko says, but elsewhere, development is already starting. Last fall, developer BSäR Group of Companies announced plans to build the Hill, a new condominium building at Chiltern Hill Road. At nine storeys with retail at ground level, it’s exactly the kind of building Keesmaat hopes to see more of popping up along Eglinton, in keeping with the city’s Avenues and Mid-Rise Buildings Study.

It’s also a welcome sight to Steven Petroff, chair of the neighbourhood’s Upper Village BIA. Petroff hopes developments will bring more businesses to the area, which he says is not as popular with travellers from outside the neighbourhood as it could be. To attract those businesses, Keesmaat and other BIA leaders agree the area needs better parking, even with the LRT and proposed bike lanes.

Maureen Sirois hopes that will happen soon. Right now, she says, the retail strip near Avenue Road attracts mostly outsiders coming for specific shops but not many window shoppers.

Keesmaat doesn’t see dramatic changes coming to the stretch near Avenue Road, beyond some more mid-rise developments. However, as one of the areas closest to Yonge Street, the change in the neighbourhood will be palpable. Keesmaat says the crosstown will make Yonge and Eglinton the new centre of the city, an epicentre of movement more important to transit than the Bloor-Yonge subway station is today. “We’re going to really see the centre of gravity shifting,” she says.

But she also stresses that, with the new developments and the population density they’ll bring, the city needs to build more public spaces in the area. “Adding spaces for people to gather and to walk their dogs is a really important part of creating a livable city,” she says. “And it’s something we haven’t talked about enough.”

As the density builds at Yonge and Eglinton, it’s inevitable some of that will spill over to the area around nearby Mount Pleasant Road, says David Zammit of the Mount Pleasant Village BIA. And though that change can be good, he says businesses are apprehensive of what the crosstown and new condos could do to rents in the neighbourhood.

“We’re anticipating a big growth,” he says. “And with that comes bigger companies that might start buying up the little shops. We’ve got to figure out a way to keep it a village.”

Keesmaat admits change is a concern, but right now there are very few planning tools the city has to mitigate it. She’s not so concerned about changes a bit further east, however, around Bayview Avenue. As one of the city’s key sites for new housing and employment buildings, the area could see the kind of high-rise development mostly absent in the west. Keesmaat says Bayview could support that kind of development without too much impact, whereas much of Eglinton’s development is in the early stages, but Keesmaat hopes the street will someday occupy the same place in Torontonians’ minds as Yonge.

“I think it has the potential to play a really important role to direct growth in the city,” she says.