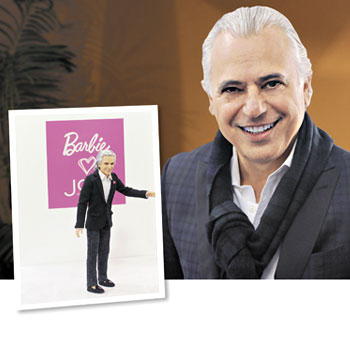 While Joseph Mimran likely never played with Barbies, he may want to now. Last month the local fashion icon received his very own look-alike doll.

“I am thrilled,” he said, regarding the doll made by Mattel, the company behind Barbie.

Although Mattel recently created replicas of Oprah Winfrey, Ralph Lauren and Will Smith, Mimran is the first personality north of the border to receive the accolade.

“It’s an honour to be the first Canadian,” he said, calling Barbie a classic style icon.

The idea came about after the Barbie Loves Joe Fresh clothing line was launched last November at Loblaws stores across Canada. The line is a partnership between Mimran’s Joe Fresh line and Mattel.

However, Mimran said he had no idea Mattel was planning to fashion a doll after him. It took three months and five Mattel designers, stylists and cosmeticians to create the doll, which replicates Mimran’s facial features and skin tone as well as his signature blazer, jeans and velvet loafers look.

Mimran began his fashion career in 1977, and in addition to Joe Fresh, he is known for founding Club Monaco.