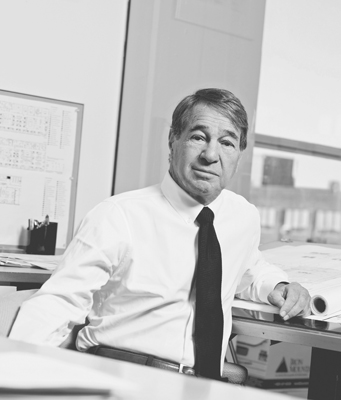 TALK ABOUT HISTORY repeating itself. In 1801, an innkeeper by the name of Abner Miles created the “nucleous” of what would become the village (and, later, the town) of Richmond Hill. He established an inn, an ashery and a general store on two lots at the corner of Yonge Street and Major MacKenzie Drive.

Indeed, Miles accidentally carved out a downtown core that would serve as the thriving “hub” of village life. Two centuries later, another individual — this time, an architect — is intent on changing both the structural and social landscape of Richmond Hill.

By constructing a state-of-the-art performance venue and restoring one of the town’s original 19th-century buildings (the Old Schoolhouse), Jack Diamond hopes to bring the life that works and plays in the big smoke back to Miles’s old stomping ground at Yonge and Major Mac.

“Locating the Centre for the Performing Arts at that northern end [of the town] really speaks to the foresight of the town of Richmond Hill,” says Diamond, principal in charge at Diamond and Schmitt Architects Inc. “It’s really going to help rejuvenate and enhance the downtown area.”

This isn’t the first time Diamond has contributed to the rejuvenation — and reconception — of Richmond Hill’s civic spaces.

In 1987, Diamond designed Richmond Hill’s Lois Hancey Aquatic Centre (a.k.a the wave pool) — the concept for which his firm later received one of their six Governor General’s Awards.

Then, in 1989, with the help of Gary McCluskie (at this time, a “rookie” who had just received his bachelor of architecture from the University of Waterloo), Diamond oversaw the creation of the Richmond Hill’s 60,000-square-foot central library.

Now, 20 years after their first collaboration, Diamond and McCluskie — now managing principal at the firm — are at it again. Thanks, in part, to Coun. Arnie Warner, chair of the Centre for the Performing Arts Steering Committee.

“Various members of the community for about 25 years had spoken about having an arts centre in Richmond Hill,” says Coun. Warner. “One, no, I think two councils ago, we thought we were looking at a community theatre. And we were determined to move ahead. After a series of studies, we selected the site … and eventually returned to our first principles: we came back to the idea of having a performing arts centre — one that could host touring, international shows as well as local choirs, local theatre groups, local dance troops … even graduation ceremonies. ”

After receiving applications from more than 20 architectural firms, Warner’s committee began whittling down their selections.

After several rounds of interviews, Coun. Warner and the steering committee selected Diamond and Schmitt Architects’ design. The reason?

“First of all,” says Coun. Warner, “they’re a world-class architectural firm. Mostly, though, we really liked how they found a way to transition from the architecture of today to the architecture of yesteryear. They incorporated the old [the schoolhouse] with the totally new [the performing arts centre].”

The town selected a firm that was not only acquainted with Richmond Hill’s architectural history but was also well versed in world-class performance spaces and restoration projects. Indeed, Diamond and Schmitt Architects boasts an impressive (and international) portfolio.

Restoration-wise, the firm has refurbished Toronto’s Berkeley Castle and renovated the offices of the Toronto Historical Board.

Although the success of Diamond and Schmitt’s bid can be traced back to the firm’s pitch-perfect proposal, the name “Jack Diamond” also resonated with members of the steering committee.

Indeed, the 76-year-old Diamond’s resumé is as impressive as his firm’s portfolio: the Oxford University–educated founding director of the University of Toronto’s master of architecture program served as commissioner of human rights for the Province of Ontario, received the Order of Ontario in 1997 and was awarded the prestigious Gold Medal from the Royal Architecture Institute of Canada in 2001.

Perhaps, though, it is Diamond’s theoretical approach to design that has really aligned him with the town’s intentions. He understands the value of the “old,” yet sees the potential in the “new.” And he isn’t opposed to multi-purpose space — something the town, and Coun. Warner, deemed necessary for their $30 million project.

“When we were working on the opera house [the Four Seasons Centre for the Performing Arts], we had the luxury of designing for one purpose. And that was the real coup: creating something that was uncompromising yet flexible,” says Diamond.

“I think that’s a really important point,” adds McCluskie, pulling up a chair to the table in the centre of Diamond’s corner office. “The space can accommodate international touring groups, local theatre groups, all amplified events, dance performances…”

“We had three groups to satisfy,” interjects Diamond. “They are the audience, the performers and the producers.”

But both McCluskie and Diamond reveal that they have an ulterior motive — albeit one that is supported by the town.

“There was a time when Richmond Hill was a town,” says Diamond. “It had a vital, vibrant town centre. With the spread of metropolitan Toronto, the retail life got sucked out of the town. And it lost its geographical identity.”

While the town was — and still is — experiencing an identity crisis, Diamond and McCluskie both insist that their creation will address Richmond Hill’s “condition.” The Centre for the Performing Arts will keep the residents of Richmond Hill in Richmond Hill.

“We know that we’re going to provide the type of entertainment that people go elsewhere to receive — at affordable prices. We have big name performers, and, yes, the ticket structure is attractive.”

To date, the performance venue, which has yet to open to the public, has already booked a number of big name acts for their winter/spring ’09 season: RyanDan, Sophie Millman, Cynthia Dale, Chantal Kreviazuk and Arlo Guthrie are just a few of the confirmed artists. Although the grand opening of the theatre was scheduled for November 2008, Coun. Warner estimates that “February 2009 will be closer to the time of the opening.”

“You need a destination,” says Coun. Warner. “As I’ve said before, we need to make the downtown area a ‘people place.’ We want them living, working and walking on Yonge Street. You could start out by seeing Michael Burgess perform at the centre … and then you might say, ‘Oh, let’s have dinner at Rhapsody or Café en Passant,’ and then you might find something you like at the new gelato store. Really, we want people to enjoy themselves. And enjoy themselves here.”

But what about the $30-odd million that the town poured into this project? “This is something I want to stress,” says Coun. Warner. “The money is from the town’s reserves. Not from last year’s property tax.”

In essence, this project was a long time coming, not only has council — rather, several incarnations of “council” — discussed the possibility of a civic, performance-oriented space for the past decade or so, but they’ve also put aside funds for this very purpose.

Still, the questions remain: Will this “world-class” space achieve what Diamond, McCluskie and Coun. Warner have envisioned for the town? And will appealing to residents’ cultural (and historical) sensibilities help reroute weekend traffic back to the 905?

“This is all about revitalizing,” says Coun. Warner. “And when you undertake a project of such magnitude, you’re really telling people that you believe in your downtown.”

It looks as though Coun. Warner’s belief is contagious.

Although the Centre for the Performing Arts has yet to open its doors, neighbouring store owners have already started refurbishing their property fronts. Downtown Richmond Hill is already looking more like the “vibrant town” that emerged in Able Miles’s wake and a little less like the bedroom community that surfaced in the mid-’80s.