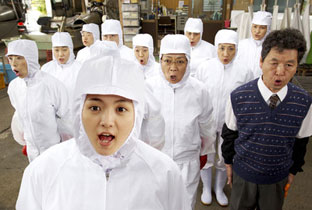 From humour to horror, this week’s 3rd annual Shinsedai Cinema Festival brings entertainment from every angle by the best of Japan’s independent filmmakers. You don’t need to know anything about Japan to enjoy these subtitled films. We caught up with festival Co-Programmer/Co-Artistic Director Chris MaGee and asked him about the festival, Japan’s film scene and what makes Hollywood so predictable anyway.

What makes Japanese cinema different from Hollywood?
The biggest difference is that Hollywood films tend to be “more real than real.” All the puzzle pieces have to fit. By the end of the film all the threads are tied up. No loose ends. Japanese film, in varying degrees, will diverge from reality, or it will leave some threads that aren’t tied up, as a service to the whole of the film. There’s not this kind of slavish connection that, if we do this then that has to happen, that A leads to B leads to C. Sometimes in Japanese film you don’t even get A, or it can go from A to C. It’s not so connected to reality as we live it, but it’s reality as constructed by the filmmaker.

What is shinsedai?
It means “new generation.” It’s a name I came up with when we started things in 2009. This is a new generation of filmmakers we are trying to showcase. It’s also a new generation kind of festival. We want to set ourselves apart from festivals that exist now or that have come before. The shinsedai concept was created by Jasper Sharp and myself and has been fostered by the Japanese Canadian Cultural Centre.

Why focus on independent films/filmmakers?
Japanese films can be as bloated and predictable as Hollywood films. Our interest lies with young filmmakers who at this point are working more along the margins and [not yet] mainstream. We find often the most interesting films are coming from there. The independent film community in Tokyo is very aware of Shinsedai [fest], so they are very happy there is a showcase for their work outside of Japan.

Do people have to be familiar with Japanese cinema or culture in order to enjoy the films at Shinsedai?
No. It helps, but it’s not a prerequisite at all. I think people can see a parallel, fairly easily, between these films and their lives, like … our opening night film Hospitalité which, although it’s a satirical look at modern Japan, it’s also a family comedy drama. So if you’re living in a household, it doesn’t take that much to recognize yourself onscreen. We program films that we believe audiences are going to enjoy regardless of their level of exploration of Japan.

What might surprise the uninitiated at Shinsedai?
The quality and nature of the films always surprises in a good way. For example, one film this year that I’m really excited about, The Catcher on the Shore, the director Ryugo Nakamura – who will be in attendance at the festival – was only 14 when he made the film. He’ll be at the festival this year, and – it’s a very simple story – and when you see the way it’s been executed you say, “Wow, where is this young man going to be 20 years from now?” Not only will you have surprises onscreen; you’ll get to meet some of the actors and filmmakers. It’s an immersive kind of weekend.