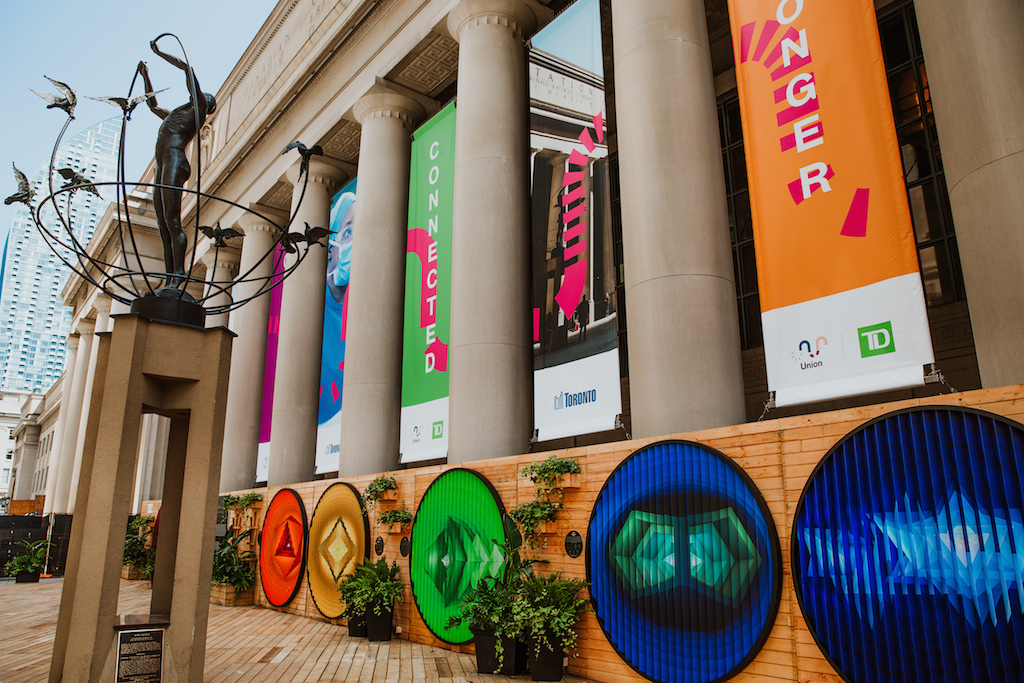 A new outdoor art installation created by Toronto artist Javid Jah was unveiled on Tuesday. The installation is part of the Union Boardwalk exhibit along Front Street in front of Union Station. The exhibit is the first of its kind in the area, and will be home to Jah’s artwork, called “The Universe Within.”

“As an almost-architect, I work for a company called Wonder Inc., and we do shipping container repurposing for homes and commercial use,” Jah says. “That got me thinking about corrugated panels, and so ‘The Universe Within’ is kind of part of that exploration of what happens when you create images on corrugated panels.”

The installation showcases circles made of these corrugated panels, and when viewers pass by they will see one image on one side of the circle and another once they pass to the other side.

“The interesting thing is I think the in-between range, where you’re seeing a mixture of those two images, but you don’t quite know where it starts and ends,” he says.

Jah started conceptualizing the installation about six weeks ago. Since he had done artwork involving agamographs (a type of art using items such as corrugated panels to show two images in one) before, he started from there.

“I come from a background in community arts and over the years have done some large scale murals,” Jah says. “I started to embrace architecture; I was not just interested in painting the surfaces of exterior buildings, but understanding how spaces are created, particularly for communities that are marginalized and low-income and racialized because we seem to not have a voice sometimes when it comes to public spaces.”

Jah says the inspiration for “The Universe Within” partially came from his Indian heritage and his connection to Islam.

“In both of those realms, it’s really understood that our connection to humans and to the larger world is much deeper than we can express in our words and in the science and the rational limits of our education,” he says. “So I’m really interested in what it means to connect beyond what we can understand and we can read and talk about. What does it mean to actually feel connected to nature, to feel connected to the planets that revolve around us?”

He says the installation represents the chakras, or energy nodes, along the body.

“If there were seven areas of our body, could there be seven planets that rotate around us, and what would it look like if each area of our body represented a planet?” he explains. “So that’s what I mean, how do we connect to a larger idea of the self as a part of the universe?”

COVID-19 influenced Jah’s artwork as well; he wanted to find something universal that could touch anybody no matter where they’re from.

“COVID has helped exacerbate all the social injustices, so I hope there is a way for us to find a commonality amongst the difference,” he says.

In order to maintain physical distancing protocols, there will be markers on the ground and Union Station staff will also be present to guide viewers through the exhibit.

Jah says it was through the help of nine artists in a collective he is part of called XYZ that he was able to put together the installation even with COVID-19 regulations in place.

“I would also like to really thank Union; they’re putting a lot of emphasis on free art for young people and they’re doing a lot of work to support local creativity in our city,” says Jah.

The installation will be available until Sept. 25 during daylight hours.