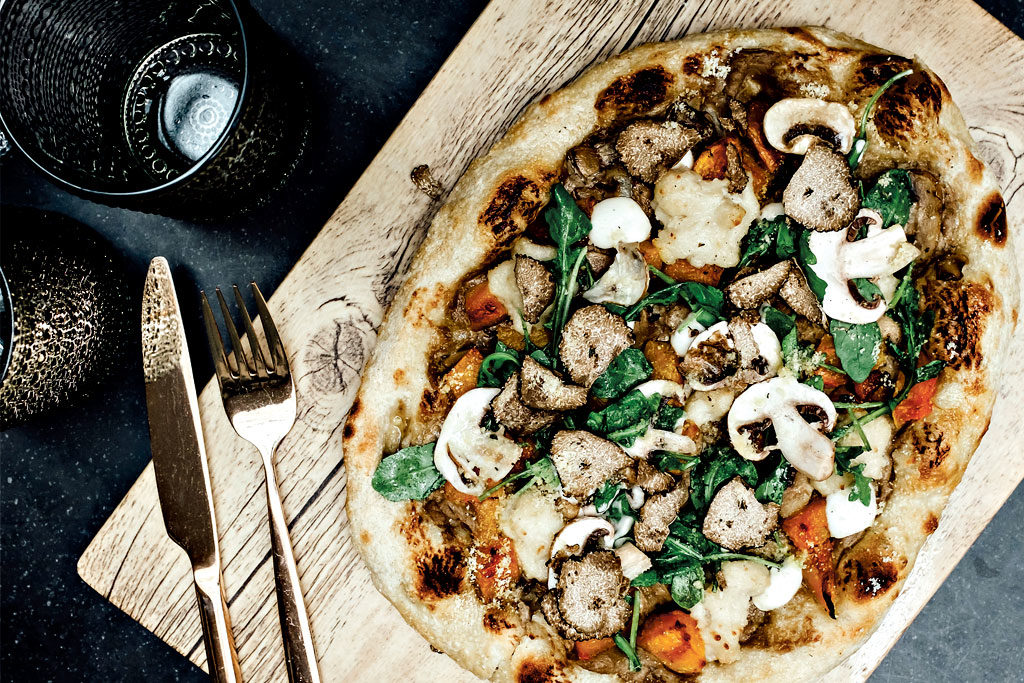 After you’re done with the top five, be sure to go back and have a look at number six to 10.

5. Planta
Last year was the year that vegan food went upscale, and Planta was the outfit that made it happen. Who better than chef David Lee from Nota Bene and Steven Salm from the Chase Hospitality Group to go vegan and show it to the world?

And who knew that a 100 per cent plant-based menu could taste so terrific?

Some of the menu reads predictable: zucchini and quinoa tartare. Not exactly a moniker to set the taste buds a-quiver. But the combo of many jazzy flavours turns bland-sounding vegan into flavour starburst.

Lettuce wraps do the same job of making me not miss meat. It turns out that “chicken fried” (a.k.a. deep-fried with a little crust) oyster mushrooms replace meat just fine in lettuce wraps with great fixin’s: rice noodles, pomelo, mango, jicama, chili and Thai basil, for all the notes we love: hot, sweet, sour and mellow. But my newly converted heart belongs to the iconic 18 carrot. Chef cooks the carrot long and slow, smokes and grills it, presenting it hotdog-style on a house-made bun with mustard, sauerkraut and pickle. And fries. This all happens in a graceful tall room with comfy seating and a feeling of great grace — as if to remind us that doing good for the planet can equal doing good for our selves and our senses.  1221 Bay St., 647-348-7000 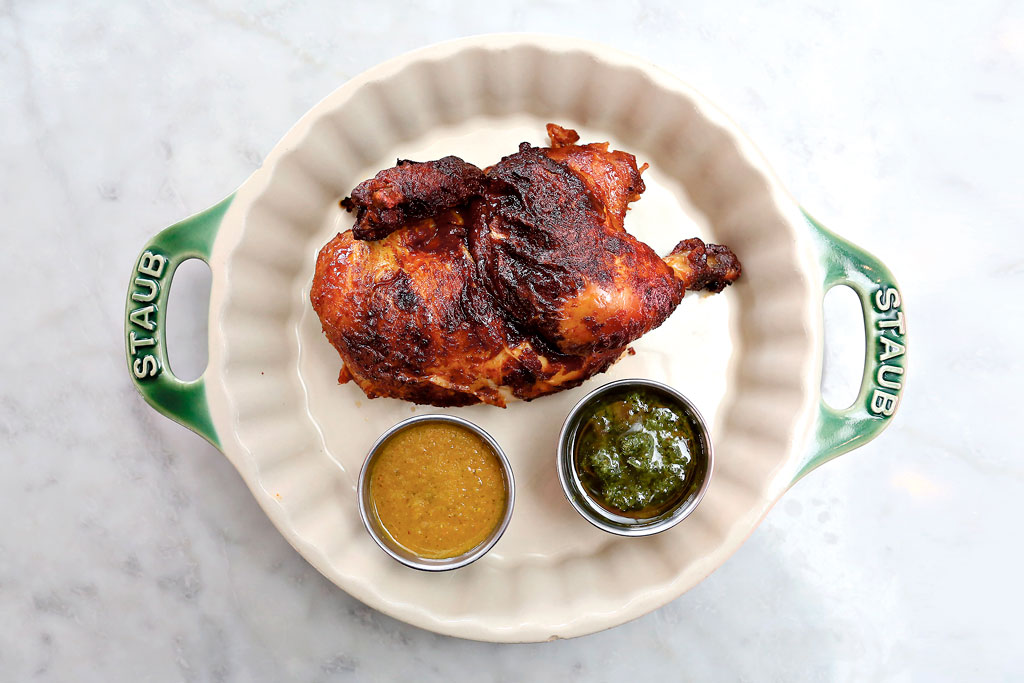 4. Flock
Three Flocks took wing in 2016. And owner Cory Vitiello closed the much-beloved Harbord Room. Why? Because the future is in the Flocks, not the incredibly laborious, pain-to-manage fine dining that was Harbord Room. Flock is a brilliant formula. Expect more of them. Mr. Vitiello deserves to prosper.

Because I, the ultimate snob girl, I who would go hungry before eating a Big Mac, love Flock food. It’s quick, it’s inexpensive, it’s takeout-friendly, healthy and it tastes great.

They roast the chicken in a snazzy French rotisserie (same one as Boulud at the Four Seasons) and the bird is breathtakingly moist, with great spiced skin. It comes with two house-made sauces: spiky green chimichurri and habanero Caribbean hot sauce with mango, carrot, ginger and curry. And btw, the chicken is raised without antibiotics or hormones.

My personal favourite Flock is one of the new 2016 ones: Harbord Street, a gracious sit-down space that proves quick food can be charming. We love the leather banquettes and marble tables, the smiley servers and the gentility of the place. 97 Harbord St., 647-748-7199 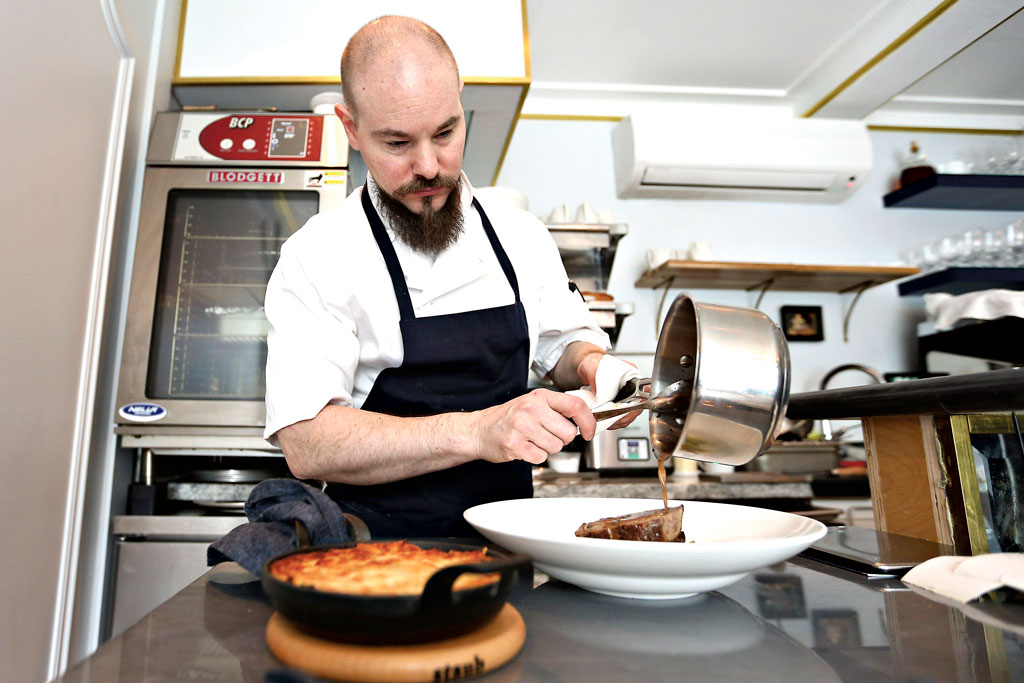 3. Chabrol
We all know French food is dead. Who needs all that bland butter and cream? Plus, the piquant flavours of Asian and Mexican have taken the town by storm, and they own our taste buds these days. So nobody was going to get excited about a tiny French bistro in (yawn) Yorkville.

But guess again, because Chabrol is a great restaurant. Breeding tells. Chef is Doug Penfold who’s doing great things at Cava. In chef Penfold’s hands, classic French mains get light and bright. Delicate salad of French lentils with beets comes together on a base of lightly smoked parsnip purée. Divine tartine of cured raw trout on house-made bread topped with shallot and chervil schmecks like Paris in the spring.

His papillote of cod with sea asparagus, leeks and Swiss chard gets a pour of superb vermouth beurre blanc from the ever-gracious waiter.

The resto’s signature dish is ttoro, bouillabaisse with big fat mussels and shrimp and perfectly cooked mackerel and snapper. The bowl comes full of fish, and the waiter, in the French style, pours on deep rich saffron-scented broth. Maybe the best fish soup in town today.

And for dessert, chef’s bow to my all-time favourite dessert, tarte tatin. The room is so tiny you can see — and smell — the buttery French apple tart baking in the glass-fronted oven in the open kitchen. It’s a sublime apple tart built on puff pastry and drenched in Calvados sabayon at the table. Chabrol is as French as it gets, the ultimate bistro. 90 Yorkville Ave., 416-428-6641 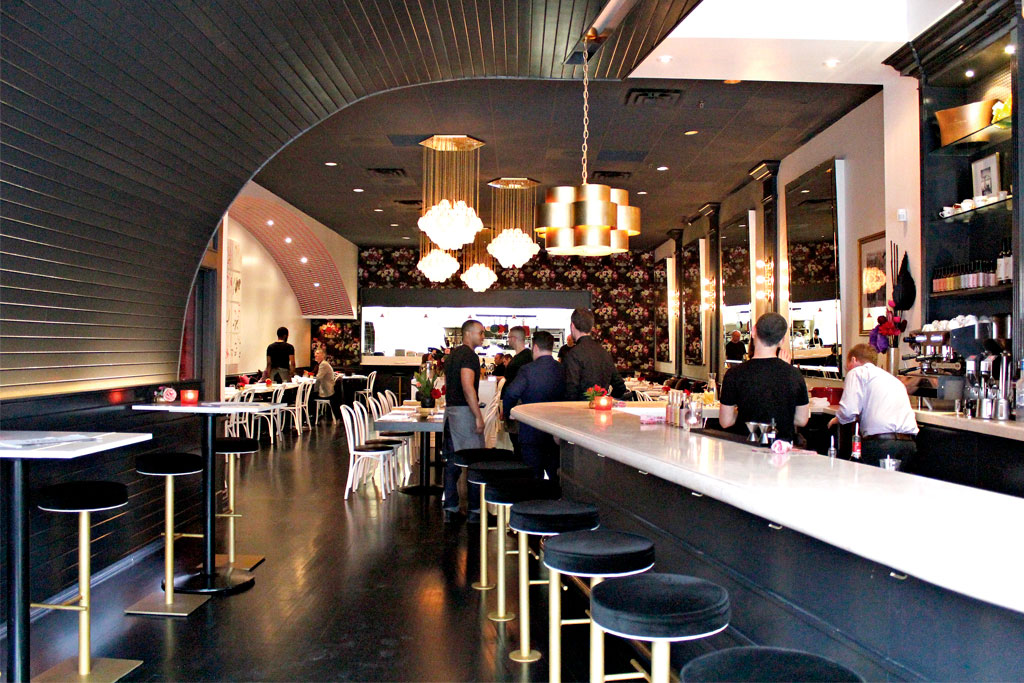 2. Piano Piano
2016 was the year that made it official: Toronto is done with white tablecloths. We’re finished with formal. The foodies of Toronto have voted with their feet, and the message is loud and clear: expensive, fancy and formal is over, gone the way of quiche and chocolate mousse.

Chef Victor Barry was probably hemorrhaging money with Splendido. Sure it was splendid. But not so many diners wanted to sit for three hours and pay $300 for a couple to dine in quiet splendour. So Mr. Barry closed Splendido and reopened as Piano Piano, a riotously colourful space that speaks of casual and cool. Toronto foodies have fallen for his $22 pizzas and $24 pasta mains, ’cause the place is packed.

They also do some terrific pastas. Pumpkin agnolotti is superb, topped with sage and parm and swimming in brown butter. They do a big raviolo stuffed with spinach-ricotta purée and a slightly cooked egg yolk, so when you cut it a golden river oozes out, which goes great with the brown butter and parm on top.

For carb-haters there’s brick chicken — roasted breast with deep-fried leg. Both feature great crisped skin and good spicing, on a big round platter of kale salad with pickled onion, olive and lemon. And a terrific raw sea bream app with avocado, chili, lime, pineapple and just a hint of coconut. 88 Harbord St., 416-929-7788 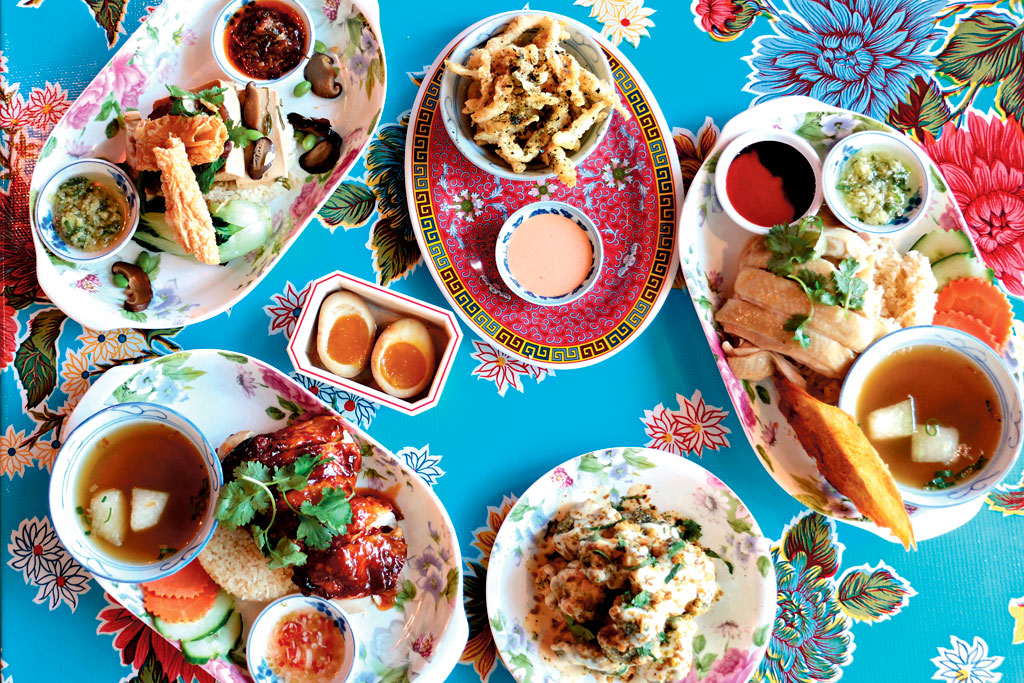 1. Jackpot Chicken Rice
When our beloved Patois closed (not for much longer, we hope) for repairs after a fire last year, owner and chef Craig Wong decided to drown his sorrows in Hainanese chicken rice. Being Craig Wong, an iconoclast and a chef, he tweaked the classic to uptick the pleasure and opened a restaurant.

Jackpot is adding dishes here and there, but I stick to the original and the sublime. Like the great Michelin three-star chefs of France used to tell me: “Show me a man (sic) who can roast a chicken perfectly and that’s a great chef.” Simple talks.

So eat Jackpot’s from original items: poached chicken is cooked in chicken stock scented with ginger and scallions and it’s as tender a bird as one could ever inhale. The add-on of crispy skin is a must. It’s baked three times with sriracha salt: sin you can’t say no to. Dip it all in ginger-scallion sauce or fresh chili. The Southeast Asian–style roast chicken is equally juicy and tender.

Both come with the re-imagined Hainanese rice. This rice is no afterthought. It’s cooked in schmaltz-laden chicken broth with pandan leaves, which produces the most astonishingly flavourful rice. Rich, tasty, addictive. Add a bowl of winter melon soup and you’re in Chinese heaven.

Chef Wong is not exactly a health-food dude, but his flavours are so intense, his textures so compelling, that I cannot deny myself his French toast for dessert. Kaya toast is a Southeast Asian snack food. The magic ingredient is kaya coconut jam, a rich amalgam of coconut, egg and sugar. Wong’s version is several layers of thin-sliced bread, filled with kaya coconut jam and deep-fried fast and hot for ultimate crunch. 318 Spadina Ave., 416-792-8628

After you’re done with the top five, be sure to go back and have a look at number six to 10.