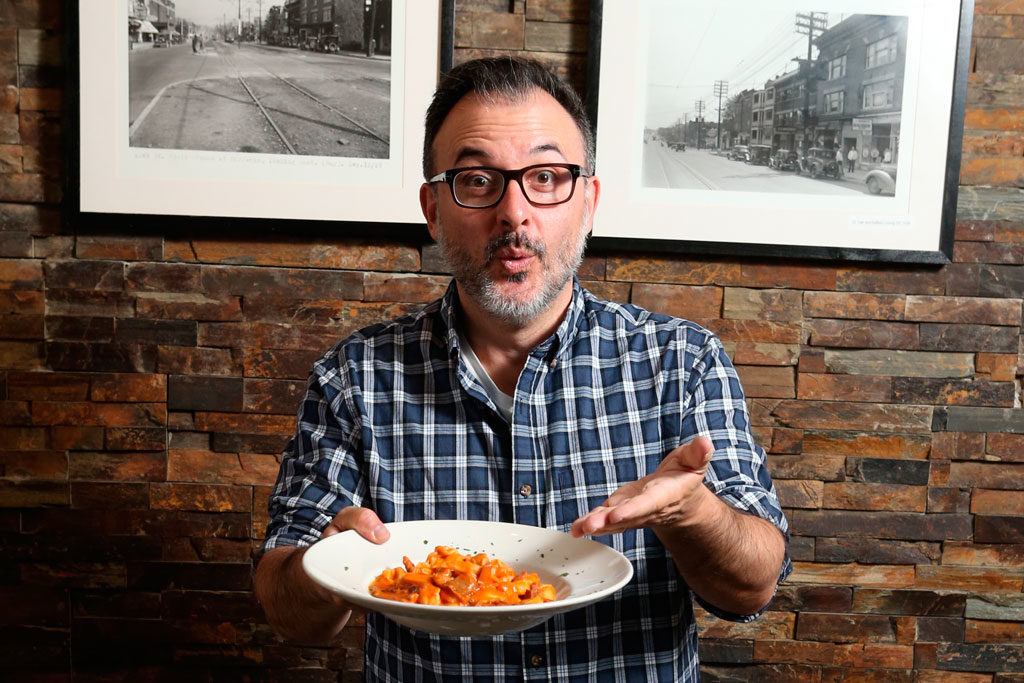 Although the phrase “eating your feelings” conjures rom-com images of jilted lovers crying into tubs of Ben & Jerry’s, for television personality John Catucci, it evokes a much more enduring concept of food’s relationship to our emotions, communities and personal identities.

Catucci’s childhood home is five blocks away from us as we sit at his favourite Toronto spot for cosy Italian, Marcello’s Pizzeria. He grew up surrounded by family members with impressive culinary prowess.

“My dad was a tailor by trade, but in another life, I’m sure he could have been a chef,” says Catucci. “He’d make these huge feasts, and us kids would go into the kitchen and steal fried artichokes and shrimp. Every Sunday, he’d start a beautiful slow-cooked ragu in the morning, and he’d sneak an early bowl upstairs just for me.”

Today, Catucci is well known for his five-season run as host for the popular Food Network show You Gotta Eat Here! His background as a comedian and improviser for the Second City touring company helped him take a passionate and fun-loving approach to hunting down Canada’s most comforting foods.

Catucci’s next big project for the Food Network, The Big Food Bucket List, which debuts in May, will draw on these same skills while taking Catucci and his team all over North America to cover a wider array of cuisines while telling the stories of the towns, chefs and communities behind the food.

He has a soft spot for family histories that weave their way through a city’s foodscapes. From childhood hangs at his uncle’s busy restaurant on St. Clair to splitting giant after-school baguettes from Tre Mari bakery with his cousins, being able to come back to his hometown still delights.

“We got to visit Patois, which is a Chinese Jamaican spot on Dundas,” he says. “Seeing these recipes coming from generations of Chinese immigrants coming to Jamaica and then how the food, people and stories then make their way here, I mean, how beautifully Canadian is that?”

Catucci’s impact on some of the most beloved Toronto restaurants is still palpable, years after episodes have aired.

“You Gotta Eat Here! showcased Lahori halal cuisine in a way that allowed people to really see the food and culture of Pakistan instead of just the negative stereotypes,” says owner of Lahore Tikka House, Gulshan Alibhai.

The colourful 23-year-old Pakistani restaurant in the Gerrard India Bazaar appeared on the fourth season of You Gotta Eat Here!. In this episode, Alibhai took Catucci through the recipes for butter chicken, lamb kebab rice dish and ended the segment with Pakistani kulfi with Kasmhiri tea, all the while gently ribbing Catucci on his spice intolerance.

Without a formal background in cookery, he doesn’t seem like a conventional Food Network star. But it was his affinity for unearthing the stories behind the dishes that won him the role.

“When they were looking for a host for [You Gotta Eat Here!] …” explains Catucci, “they wanted somebody who could bring stories out of people and who could have fun and connect with the emotion behind the food.”

He recounts an incident over a modest hoagie in a Calgary restaurant that really brought his emotions to the table.

“I had to stop filming because a wave of emotions hit me when I bit into this meatball sub,” he says. “It was wild. It was just like my dad’s, and he had passed away five years ago at that point. The chef had also lost his father, and he thanked me afterwards for opening up about the impact his food had on me.”

His travels so far seem to be bringing him full circle to the genre that marked the start of his career in food.

“Comfort food is just what connects everybody,” says Catucci.

“Whatever culture you’re from, whatever style of food you like to eat, there’s that one dish that reminds you of being a kid —reminds you of love. You can feel it. So in the end, we’re always eating our feelings. Doesn’t it always come back to that?”