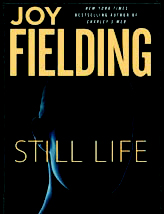 DECKED OUT IN a black skull and crossbones cardigan sweater, Joy Fielding, a world-renowned Toronto author, settles into a café seat a block from her new home in Yorkville to talk about her latest novel, Still Life.

“It centres on Casey Marshall, a woman who seems to have everything, and in fact does. She is hit by a car and ends up in a coma,” Fielding explains. “And that is the start of her discovery that everything she thought about her life is not true and that the accident was not an accident and someone wants her dead.”

Fielding says Still Life was one of the most challenging books of her career.

“It was so confining. I had written myself into this corner where the main character can’t do anything,” says Fielding, throwing up her hands in feigned exasperation. “So the action had to happen at her bedside, her imagination and flashbacks.”

The plot twist plays to one of the most prominent themes in Fielding’s writings: the invisibility of women and the idea of women being trapped. “I’d been thinking about it off and on for a while,” says Fielding. “To me, this is the ultimate situation of being trapped.”

Despite the challenging premise, Fielding describes Still Life as a “gift.”

“It really was,” she says. “It essentially wrote itself. I really didn’t have to work it out.” Fielding has already finished her next book, Wild Zone, set in South Beach, due out next spring. “It is a departure for me,” Fielding explains. “It is about three men who bet casually at a bar, and it has rather deadly consequences.”

The author, who has a penchant for golf and is a member of the Donalda Country Club in Toronto, is also set to travel to Ireland and Scotland this fall where her next book will be set.

Fielding was an aspiring actress before dedicating her life to the written word. While living in L.A., she auditioned for and got a small part in an episode of Gunsmoke.

“I played a rancher’s daughter who was struck mute when her brothers were massacred by Indians (they were called Indians back then),” says Fielding. “The father brought a pregnant Indian woman into our home, and I tried to kill her with scissors before delivering her baby and getting my voice back.” Explains a lot.

“Ish and So few of Me, two books by Peter Reynolds that are the best books written for kids and adults alike. A tribute to allowing yourself the time and room to dream and create by relaxing. And The Ice Queen by Alice Hoffman. A great summer read. The story will draw you in and suspend you in a world where the line between reality and fantasy is blurred.” Martinez’s new album, Amor, is out this fall. Catch her July 2 at the Toronto Jazz Festival

by Michael Ignatieff
The on-again, off-again Canadian with a Harvard pedigree publishes his first book since assuming the leadership of the Liberal Party of Canada. In this honest, new work, Ignatieff tells the story of his mother’s family, the Grants. Here, Ignatieff tells his ideas of what Canada was and what it should be. Looking to get to know this Canadian a bit better? Here’s your chance.

WHY YOUR WORLD IS ABOUT TO GET A WHOLE LOT SMALLER

by Jeff Rubin
A popular guy these days, Rubin is the go-to economist of the moment. And in this groundbreaking new work, Rubin gives his assessment of the future of the global economy in a world where “cheap energy” is a thing of the past. Find out what subprime mortgages, Atlantic salmon, SUVs and globalization all have in common.