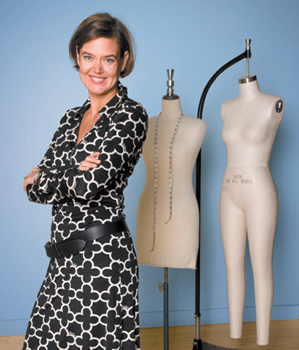 SERVING STAFF HAVE never looked so good, and it’s all thanks to one woman. The stylish Pink Tartan riding pants adorning the waitresses at Cheval on this evening make the cool King Street West venue seem like an extension of the runway. The buzzing, in-the-know crowd is here for one reason: Pink Tartan’s founder and popular fashion designer, Kim Newport-Mimran. Of course, the elegant silver platters of red and white wine can’t hurt attendance, either.

After an hour of mingling at Pink Tartan’s Fashion Week after party, the humming of fashionista chatter changes tone as in walks the vibrant, fresh-faced Newport-Mimran. In between air kisses from friends and hollers of “Great show, Kim!” from admirers, the fashion guru happily bounces among fans, friends and the press.

For a company in only its sixth year, Pink Tartan has done incredibly well. The brand opened its New York showroom in 2004 and is now available at such high-end stores as Holt Renfrew, TNT and Andrew’s in Toronto, online at Neiman Marcus and Saks Fifth Avenue, and Luxe Couture in Dubai and Soho Look in Seoul, South Korea.

Newport-Mimran started her professional fashion career following her completion of the fashion merchandising and manufacturing degree at George Brown College. For the next two years, she worked in the Hudson’s Bay buying department where she put her business skills into practice.

Climbing up the high-fashion ladder, she landed a job at Club Monaco in 1990, as the Canadian chain’s senior merchandise manager, where she remained for the next eight years. Next, she became senior manager for Caban until the company was sold and it was time for her to take the next step.

Newport-Mimran envisioned a company that could cater to busy but fashionable women on the go. She set out to provide women with fresh and fashionable attire without them having to spend too much time to achieve that look. With that, Pink Tartan was born. Today, the brand has remained true to its founder’s original vision. Pink Tartan is known for stylish attire that is easy to put together yet will still make you look and feel fantastic. As the woman herself has often said, she wants her customers to be able to throw on one of her pieces and walk out the door feeling great.

“I always had big dreams,” she says of where she now is. “You have to have big dreams and big goals.” She keeps an open mind to creativity and warns of stifling your own potential. “The moment you are not open to learning is the moment you cannot grow,” she says.

“I learn something new every day. Whether it’s the hard way or the easy way, it’s about learning and adapting.”

Evidence of her big dreams is in the company’s broad international presence. Being in both Asia and Europe twice a year and with monthly trips to the Big Apple, Newport-Mimran constantly exposes herself and her team to new visions.

But it hasn’t been all roses for Newport-Mimran. As with any entrepreneur, she has experienced her share of bumps.

“I learn something new every day,” she says. “Whether I’ve learned it the hard way or the easy way, it’s just about learning and adapting. This business is very competitive, it’s very fast, and it’s just about keeping your focus and keeping on top, to do the best that you can do.” Through it all, this modern working woman approaches stress in a way that would have made Maharishi proud.

“It’s balance and you have to take care of yourself,” she says of her stress-fighting technique. “You can’t take anything too seriously. You’ve just got to do your best. If you’re always worrying about ‘What if, what if…’” She trails off, to divulge the Mimran family secret to handling stress: “The Tale of Danny Thomas,” which her husband shared with his young bride years ago and which Newport-Mimran has since passed on to their seven-year-old daughter, Jacqueline.

One day a man named Danny Thomas is driving down a dirt road when he gets a flat tire. Stuck on the side of the road without a jack, he sees a farmhouse in the distance. As the man makes the long trek to this farmhouse his mind races: Will they even have a jack? Do I have money to pay for it?

“And on and on,” she narrates as if reading a bedtime story. By the time he has reached the farmhouse, he has worked himself into such a state that, when a sweet old lady opens the door, all he can do is yell at her and storm off before being helped. “So the moral of the story is he got himself so worked up before anything even happened,” she says. “We try not to ‘Danny Thomas’ in the house.”

Newport-Mimran’s recipe for success is this family rule combined with maintaining an overall healthy lifestyle. In addition to daily workouts, “you have to eat well,” she says, sounding motherly. “If you’re not giving yourself nourishment properly, then you’re not going to be performing at your optimum.” She is a firm believer in the idea that whatever product you apply to your face you should also be able to ingest, and so comes another secret: rosehip oil.

“I swear by it. I was never sort of granola-y but was always sort of on the natural side. I don’t wear a lot of makeup and don’t use a lot of product, but I find that there are certain products that really work well for me, and rosehip oil is one of them.”

It’s clear that Newport-Mimran is not your stereotypical fashion executive. Indeed, her down-toearth personality brings a refreshing change to the often artificial world of fashion. Rather than being harsh and unforgiving as one may expect a top-line fashion designer to be (think Meryl Streep in The Devil Wears Prada), she is quite the opposite: a lighthearted woman who oozes love and happiness in all that she does.

That attitude seems to breed success. “I love my job, I must say,” she gushes. “I love that it’s always changing, and I sort of thrive on change, and I find that very exciting, that nothing’s ever the same. I also just love retail, so I love product and seeing product from the idea stage into being fully executed.”

When she’s at home, the down-toearth Forest Hiller is sweet on summer strolls to the Village Chill with her daughter and adores the luxury of having What A Bagel just an arm’s length away for a quick tuna bagel. She’s not finicky about where she does her grocery shopping, either.

“I’m a Whole Foods shopper and Loblaws — it depends what I need. And I do Grocery Gateway, too. It’s wherever my necessity takes me. Whatever we’re out of.” Spoken like a true woman on the go.

And what’s the best thing about living in the Village? “It’s got a little bit of neighbourhood to it,” she says of her area of 10 years. “We walk over to Starbucks, because it’s there, and on a casual night, when I don’t feel like cooking, we go over to Sotto in the Village. And you know, it’s just the convenience of having the Village there. It’s so great. That’s where my bank is and all the stuff that we do.”

She and her husband could not be happier in their newly renovated home, which overlooks a gorgeous ravine, and she swears they will not be leaving the ’hood any time soon.

Meanwhile, plans for Pink Tartan are at the forefront of her mind: “We’re going to build the brand, build the team, and it will happen,” she says.