King of T.O.’s new deli is on the move | TRNTO.com
Skip to content 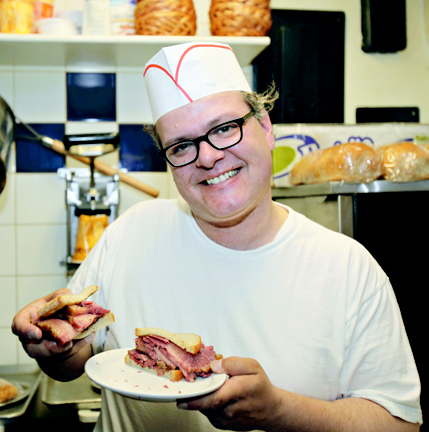 ZANE CAPLANSKY HAS accidentally become the king of Toronto deli food. His smoked meat restaurant, Caplansky’s, which is holed up in the Monarch Tavern in Little Italy, is a throwback to the way Toronto used to be 50 years ago, with restaurants offering Jewish comfort food. And it is working.

Caplansky’s was named one of the best new restaurants in the city by Toronto’s top food critic, the Globe and Mail’s Joanne Kates.

“Caplansky is meshuga for smoked meat,” she penned in her review last March. “He’s got a bee in his bonnet to make the best smoked meat in the world.”

He was even “tweeted” by the grand pooh-bah of food critics Ruth Reichl, editor of Gourmet magazine, who typed, matter of factly, “Caplansky’s smoked meat awesome.”

“The whole thing wasn’t strategic. I never set out to be a pioneer or start any movement,” says Caplansky. “It just happened organically, and I couldn’t be happier.”

Caplansky, who changed his name from Caplan to Caplansky when he opened for business, started serving his brisket 14 months ago, which he dry-cures for two weeks in a secret seasoning before smoking it for hours on end.

His smoked meat has garnered a following with people who love real deli food but don’t necessarily want to travel to North York to get it, and rave reviews have inspired the restaurateur to expand. This summer he will close up the Monarch Tavern location and open a much larger operation in a new location all his own on College Street.

The Caplansky family has been a part of Toronto’s food landscape for a long time. Caplansky’s greatgrandfather owned a kosher butcher shop across the street from his new location and his father was an original partner in Lime Rickey’s.

“My family has been in Toronto 100 years, my great-grandfather came in the late 1800s, so I feel an intensive and passionate love affair with this city,” he says. “I love the diversity and opportunity that Toronto has offered my family and generations of families who have been able to come here and build a life for themselves. To be able to give something back and create a place is a dream come true.”

“What happened was, when you make a 10-pound brisket, there is only so much one person can eat.”

Caplansky grew up as Zane Caplan in North York, son of legendary politician Elinor Caplan, who was an elected member of both the federal and provincial parliaments. He attended York Mills Collegiate Institute, then the University of Western Ontario, followed by George Brown.

His earliest memories are of his pappa taking him to Switzer’s Deli, just the two of them. Pappa was in the shmatte trade, a woman’s clothing manufacturer, and he used to hire his grandson to come in on Sundays and sharpen pencils, paying him a nickel for each pencil. Part of the job was to give out candies and talk to customers, and after a hard day’s work, they would go to the deli for corned beef sandwiches with French fries and cream soda. When Caplansky was a teen, he got together with a girl who introduced him to Schwartz’s Deli in her hometown of Montreal.

“When I tasted that smoked meat, it was really a life-changing experience,” he says. “Then, a few years ago, I had a friend come back from Montreal and asked him to bring me a sandwich. When he didn’t, I said ‘You know what? I am going to try and do this myself,’ and I set about trying to make smoked meat. From the very first time I did it, it was really good. I’ve refined the technique and the recipe since. But what happened was, when you make a 10-pound brisket, there is only so much one person can eat.

“I brought some into a restaurant I was managing at the time, and people who didn’t know deli said that they thought this was the best thing they had ever tasted and asked me for more and to buy some,” Caplansky explains. “This really encouraged me and made me think there was potential to serve this to the public.”

In the 1940s and ’50s, Kensington Market and College Street were a focal point of Jewish culture, and delis were abundant. Caplansky’s new location was once a deli called Smith’s, and Caplansky wants to make sure he captures that old-time feeling while maintaining his affordable and causal ambience.

He feels that, in tough financial times like these, there is nothing that makes people feel better than comfort food, and his vision came at the right time.

“My timing was impeccable by offering what really is classic comfort Jewish soul food,” says Caplansky.

With his new restaurant, Caplansky plans on expanding his offerings to include such items as an all-day Jewish breakfast, salami and eggs and a smoked meat hash as well as an eggs and onions plate.

Caplansky is going to offer beef bacon instead of pork and will make sure there are options for those who don’t eat red meat or are vegetarian.

“I really want my growth to be driven by my customers and not by my ego,” he explains.

Caplansky has also garnered quite the following with his blog on the life of a modern-day deli owner (blog.caplanskys.com). It is a funny and quirky account of his life behind the counter, and he doesn’t shy away from telling his customers the truth on the Internet, including his nerves before opening and that his first business plan estimated he would sell just two sandwiches a day.

But what really makes people come back to Caplansky’s time and time again is his attention to tradition and detail. Caplansky wants people to feel as comfortable in his deli as he felt in Switzer’s when he was a kid.

“One of my greatest pleasures is to have people come in and tell me their deli stories, the ones that they went to and loved,” he says.

“It gives me a lot of pleasure that I can help evoke these memories and help people remember these times of their lives that were special to them because my memories of my pappa at Switzer’s are the dearest of my heart, and he was a very special man to me. I get to relive that every day I go to work, and I feel his presence and that of my other grandparents.”