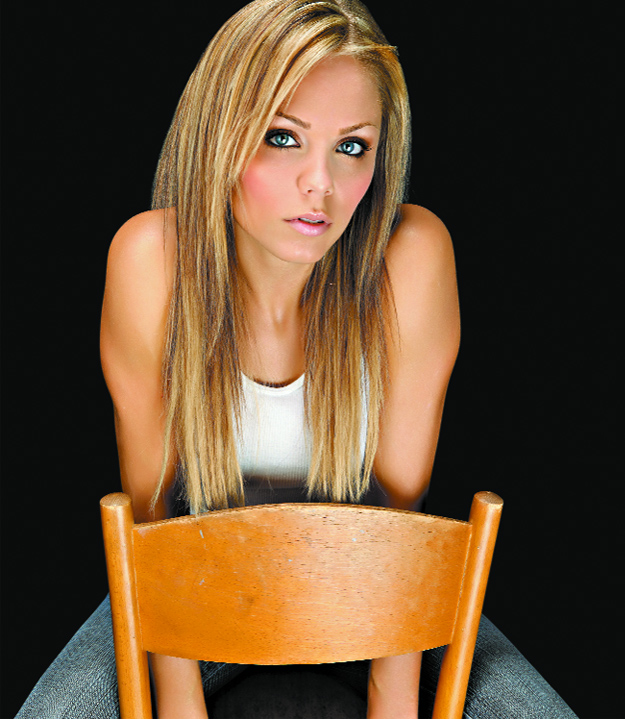 Laura Vandervoort has high cheekbones, blue eyes, blond hair and the kind of curves that usually see her cast in bikinis. But the 25-year-old bombshell from Bayview says she was a tomboy growing up, and that when she spotted Colin Farrell at the Windsor Arms Hotel during the Toronto Film Festival, she immediately turned beet red and had to force herself not to turn tail and hide.

“I’m not used to doing red carpet stuff, and when I see people like Colin Farrell or Keanu Reeves or Robin Wright Penn, I usually just say, ‘Hey, I love your work!’ then go text my sister,” says Vandervoort, who got her first big role on Goosebumps, while she was a 13-year-old theatre geek at York Mills Collegiate. Soon, she will be coming to American and Canadian prime time TV as the star of V, a 2009 freshening up of the ’80s sci-fi cult smash. “It would be cool if I was recognized someday, and I hope people like my work, but I’m the same girl who worked at American Eagle at the Fairview Mall — at least I get recognized there.”

Growing up, Vandervoort was more interested in karate than makeup, and she earned a double black belt at Northern Karate on Don Mills and Eglinton where she also worked as an instructor.

“I was the only girl in the dojo, so, of course, nobody wanted to fight me,” says Vandervoort, with a laugh. “That pissed me off when the guys would go half-assed, so I’d sock them as hard as I could.”

After catching the Macaulay Culkin film My Girl, the young Vandervoort grew smitten with acting, and she’d spend afternoons with her sister putting on plays.

“We have VHS tapes of Laura hamming it up in front of the video camera at three years old,” says Laura’s mom, who used to join her daughter on sojourns to Los Angeles for pilot season when her daughter was just 13. “Laura was always focused and determined to do well. She was always prepared; she didn’t need her dad and me for that. It can be tough on a young actor to get so many more noes than yeses, but Laura knew what she wanted. She kept at it, and we were there for her with hugs and support.”

Luckily, for the budding thespian, there would be many more yeses than noes, and she’d spend four years as a lead on Instant Star in Canada before landing her first big role in the States. According to Vandervoort, it was hard being a teenager auditioning in Hollywood, but she talks about finding an inner reserve.

“It’s tough when you don’t know yourself and you’re auditioning against 25-year-old women and, you know, I’m from Bayview — I was still impressed by the palm trees,” says Vandervoort, who nevertheless wowed producers enough to land the part of Supergirl in Smallville, the hip television re-imagining of the Superman franchise. Even though the series would introduce her to U.S. audiences, it also introduced a problem Vandervoort would struggle against her entire career: casting agents refused to see beyond her good looks.

“If I’m blond and blue-eyed, they think I can’t play a deep emotional role,” Vandervoort says. “You get typecast, and even in Smallville, I was playing an anatomically enhanced idea of what people thought I was. It’s crazy how much stereotyping happens. More often than not, it comes down to a physical thing.”

Still, if Vandervoort ever felt discouraged, she had a secret weapon in her arsenal from back home. While shooting Goosebumps, she was sitting outside her trailer with her mother when a Canadian icon recognized her mom. It was Gordon Pinsent, a distant relative, and the two have been close ever since.

“Laura’s early questions were the usual ones asked by a very young person: ‘How do I get into acting in the first place? Agent questions come early. Where, how do I start?’ Since then, she has found out so much more, by listening, watching, and making sure her craft is in place for when each new job comes along,” Pinsent says. “Physical beauty is one thing, but just think how much more beauty there is when they can see the complete inner story of you as well.”

Vandervoort would get her chance to flex real acting muscles when she appeared opposite Jeff Daniels and Joseph Gordon-Levitt in The Lookout, her first real dalliance in big-time Hollywood moviemaking.

“That was such a big thing for me, to learn about the film industry, and I almost preferred it to television because movies are done so much faster,” Vandervoort says. “In a movie, you enthrall yourself in a character then move on to a new project. On a series, four years can go by, and you’re still playing the same thing.”

After The Lookout opened to rave reviews, Vandervoort and her Canadian boyfriend moved to a small place in Burbank, Calif., in anticipation of her next big movie deal. However, her most recent film was made much closer to home — by a graduate of York Mills Collegiate.

“My only memory of Laura from high school is that of a girl standing alone by a set of lockers eating lunch,” says filmmaker Josh Koffman, who cast Laura as the lead in his film The Jazzman, a biopic of his grandfather, the legendary Canadian sax player Moe Koffman. The experience opened her eyes once again to the joys of feature filmmaking, but Vandervoort won’t have much time to pursue the silver screen. What was originally cast as a small one-off part in V became a lead role after producers caught her performance.

“I play a visitor from another planet, and my job is to bring humans over to our side of the fence,” Vandervoort says. “I’m supposed to be anatomically appealing to humans, even though I’m really a reptile underneath.”

The role, of course, once again plays on the stereotypes of Vandervoort’s features. But she has shown both the will and the ability to expand. Taking Pinsent’s advice, she recently died her hair black and sported an armful of tattoos for Riverworld, a new Canadian miniseries, which recently wrapped.

It’s been a long time since Vandervoort first started making billboards for Pizza Pizza (her first gig). But with her anticipated new series about to launch in November and a slew of screenplays to read, the bombshell from Bayview may be entering a new phase in her career. Who knows, during next year’s film festival, it might be Colin Farrell, Keanu Reeves and Robin Wright Penn texting their own sisters when Vandervoort walks by.