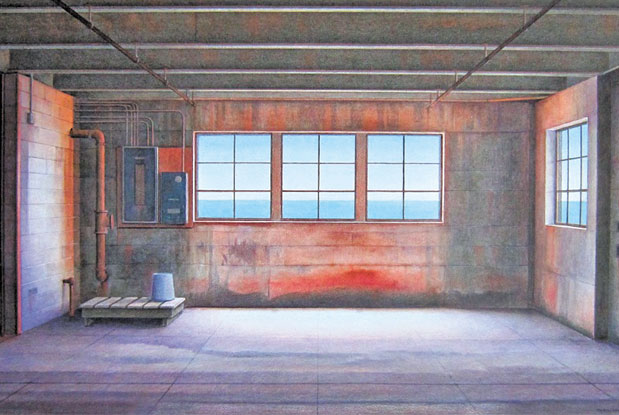 The sky fills the landscape and bathes the wharf in the blues and yellows of dusk. The water is almost entirely obscured by a rock pier of snow-covered boulders, and the foreground holds a provocative image: the tattered remains of a raised Canadian flag are blown westward by the wind. There’s not a soul in sight.

This scene in Christopher Pratt’s 2004 painting Winter at Whiteway feels strangely familiar yet is somehow also alien. Pratt neatly sums up the deliberate hyperrealism of his style: “There’s a balance between the realism of it and the formality of it,” he explains. “If you look closely — and you don’t have to look that closely — you know right away that nothing really looks like that.”

Although his canvas might be a skewed mirror of reality, all of Pratt’s iconic images of Newfoundland reveal a strong sense of place. Like the island province his artwork is Canadian but retains an otherworldly, mystical quality. This month, the Mira Godard Gallery in Yorkville is featuring the exhibition New Work by Pratt, running from May 4 to 25.

Pratt is a Newfoundlander through and through, though not, he assures, to the detriment of his Canadian identity (he is a proud Companion of the Order of Canada, and designed the provincial flag of Newfoundland and Labrador). Born in St. John’s in 1935, he has only briefly resided off the island, and he has lived his childhood years not as a Canadian, but as a Newfoundlander.

“I think most Newfoundlanders, certainly those of us who were born before Confederation, have a different sense of what Newfoundland is,” says Pratt. “I was 13 and a half years old before I became Canadian.”
This lifelong allegiance is reflected in Pratt’s art. Local seascapes, boats, architectural elements and roads populate his paintings and prints. His work, he says, is a record of the world he lives in, and from early on, his paintings were “almost a daybook or personal diary.”

This quotidian use of the medium reflects Pratt’s natural ease with painting, which he first attempted at age 15 under the tutelage of his grandfather.

“It sounds corny,” he says reluctantly, “but it was almost like a calling.”

A calling, yes, but a career, no. Just out of high school and only 16, Pratt entered the pre-engineering program at Memorial University. This particular plan was short-lived. The study of engineering did not suit the budding artist, with the exception of surveying and drawing.

“The things that I learned there I still use to this hour,” says Pratt. “Concepts of space that you pick up when you’re surveying and ways of laying things out from a draftsman’s point of view, I think of them as being continuously part of what I do. They just come along with me.”

Pratt handily picked up enduring skills during his one year in the program before moving on — however unlikely it seems now — to pre-med. He followed his friends to New Brunswick’s Mount Allison University, knowing it boasted a renowned fine arts department.

“My mother wanted me to be a doctor, so I simply told her I was going to Mount Allison to do pre-med. I went more or less with false pretensions,” he says.

At the first opportunity, Pratt made his way to the art department. On faculty were Alex Colville, Lawren P. Harris and Ted Pulford, and the renowned artists were quick to note Pratt’s promise. They immediately suggested Pratt decamp from pre-med to fine arts.

“Mr. Harris actually wrote to my father and told him he knew that doctors made more money than artists, but he thought that I absolutely should be taking fine arts on account of the work that he had seen,” recalls Pratt.

Pratt’s father, with his cautiously conservative views on painting careers (“a direct, non-winding road to poverty,” deadpans Pratt), found Harris’ argument absolutely unconvincing. Nonetheless, he bit his tongue as his son switched from pre-med to a BA program and then dropped out the following year to paint.

Pratt has done nothing else since. After a stint at the Glasgow School of Art, he returned to the East Coast to paint and teach, and over the decades, his work has gained international recognition.

Since so few of his works over the years have included human figures, the solitude and isolation in the artist’s vision is hard to ignore. When questioned on it, though, Pratt pulls the rug out from under the notion that he portrays a totally depopulated landscape. “There’s always a person there and the person is always me,” he says, drawing attention to the watchful eye of the painter that lingers over every painting.

Pratt continues to put in 12-hour days at his studio and feels restless when he’s not at work. In the past, he has, he says, gone through phases of productivity.

“I got passionate about sailing, and spent 12 summers where I hardly did any painting at all but concentrated on winning races,” says Pratt. “But you know, winning a sailboat race and getting a painting right is pretty much the same thing for me. You just take care of the details, you watch where you’re going. You accept the wind shifts as they favour or interrupt your passage. I’m going where the wind takes me.”