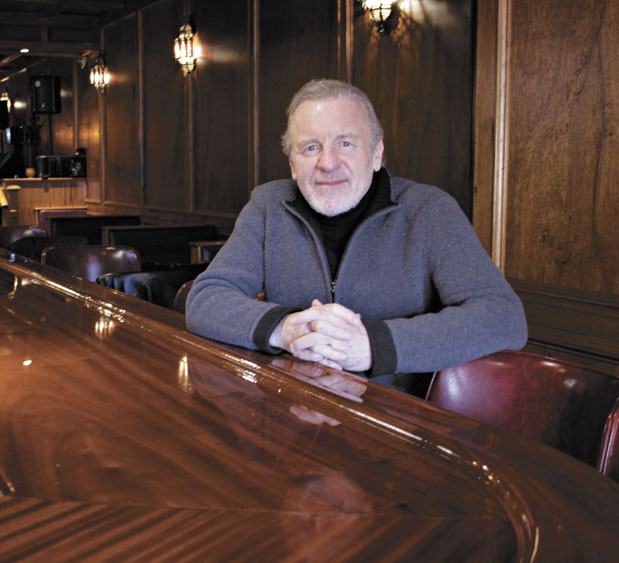 When producers of the original Les Miserables searched for a leading man with the face of a felon and the voice of an angel, they had to look no further than Colm Wilkinson.

Yet when I meet with Colm at the Inter Steer Pub in Roncesvalles Village, his welcoming handshake and warm smile don’t give the impression of a convict, but of a distinguished Irishman who seems right at home in this quaint west-end Toronto neighbourhood.

“For me, being European, I hear a lot about villages here,” says Wilkinson. “I go around looking for them. This for me is the nearest you can get to one. It’s somewhat small and contained. I just love it.”

Born in Dublin, Ireland, the talented tenor bounced from London to Broadway to carry the part of Jean Valjean in Les Miserables before moving his family to Toronto in 1989 to take on the lead in Phantom of the Opera.

“I’d been doing Phantom for four and a half years, the kids were on track, it was a very safe city, close to New York and so we stayed,” he says.

And now with his children grown, a dog-eared passport and a newly-released CD entitled Broadway and Beyond, Colm attests to feeling most content when he can return to his roots right here in Roncesvalles.

“I would say that this area reminds me most of Ireland,” he says. “It’s very, very friendly, and has the feel of a small community.”

Sitting in the low-lit pub Colm expands on this tight-knit notion by reviewing some of the local characters who keep the area interesting. A former general who walks from Mississauga each day to play piano at a local bar, a cheery crossing guard who showers passersby with lollipops and curry powder and a mainstay patron of the Inter Steer pub where Colm and I sip on pop and scope out the area.

“Every time I come in this guy’s either standing at the bar talking to everyone around him or he’s playing chess,” he says, gesturing towards the back of the building. The afternoon sun spotlights the few patrons who mill about an open pool table, exchanging soft arguments in Polish.

Similar banter follows Colm and I as we begin our journey south down Roncesvalles avenue – famous for having been the centre of Toronto’s Polish community for more than half a century.

“There’s a Polish festival here in the summer that we love to come to,” says Colm. “Kids get their faces painted, they’ve got food stalls,  Polish costumes, a stage where local Polish bands play – it’s great  to watch.”

A natural fan of all things music, Colm cites the area’s She Said Boom record store as a key spot for sifting through a variety of vinyl, including soul, his personal favourite.

“You tend to hear lots of great music along this strip,” says Colm as we make our way into Benna’s Bakery and Deli. Greeting us upon arrival are what look like four sisters, who are chatting happily at their registers while pockets of local grocers present their finds.

Rich pastries, fresh loaves of bread and piles of pierogies dominate the shelves of Benna’s while Thin Blue Line Cheese Boutique down the road offers us another taste of temptation.

“I love olives,” says Colm as he scoops up a pile of the fresh fruits presented beautifully in a row of vintage wooden crates. Pretending to swallow a mouthful, Colm speaks to the modestly elegant decor of the fine cheese shop and the jovial attitude that seems to pan across every such store in Roncesvalles.

“We’ll come again,” he says to the young man behind the counter, who by now has exchanged names, a handshake and a few friendly words with the singer.

As we walk towards Hawk Eyes – referred to as a “must-see” by Colm, he points out the local library and churches, praising the stately architecture that surrounds us.

“Some beautiful old homes in this area,”  he says pointing towards the west. “That’s the side that’s the more upmarket although there’s great stuff on this side as well.”

As we saunter into Hawk Eyes – a kitschy vintage furniture boutique with the look of an antique dollhouse – we’re welcomed by a tiny dog and by Rachelle, the young owner who has come to know Colm over the years.

“The teapot was a huge hit,” he tells her of a recent purchase before dramatically reciting a verse from one of the store’s vintage paperbacks.

A quick peek into the local independent movie rental shop (and not to mention ice cream parlour) The Film Buff, and then we find ourselves reflecting upon the day and neighbourhood over a latte and an iced tea at Tinto Coffee House

“You’ve got a park, a lake, coffee bars, bars proper, record shops and some great eating places,” says Colm. “It’s just a wonderful place to be.”