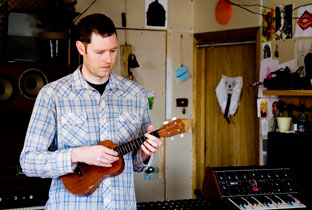 Singer-songwriter Chad VanGaalen is appearing at the North By Northeast music festival this Saturday, right on the heels of the release of his latest album, Diaper Island. The Calgary musician’s latest effort sees music that is stripped of the pervasive electronica that characterized him previously. In its place is a bare-bones indie rock that might just make him even more popular. But can the reclusive rocker handle more success? We spoke with him to find out.

What can you tell me about the new record? A change of pace?
Yes, it is like a rock record, pretty stripped down. It took me quite a while to record it.

Why is that?
It took a while to get to it. I kind of took about two years recording. I went through almost three records that were total disasters before this one was good.

What’s with the album title, Diaper Island? A nod to the baby in your life, I take it?
Yeah, I mean that had something to do with it. It was more along the lines of "garbage island," but "diaper island" just sounded a little more surreal. It is more a metaphor for human beings in general wrapping stuff up in plastic, taking the waste produced and wrapping it in a time capsule to put it in the earth, cause that’s what happens with plastic.

So you’re described in terms reminiscent of a hermit — I’m sure that’s not true since you’re a family guy and you tour — but how did that reputation come about?
I work from home, as an animator, so I really don’t leave my house. If people want to visit or hang out they usually come over here. It is easier. I actually don’t really leave my house, but I am socially functional. I’m not a recluse because I hate people, I just have a lot to do. When I’m not working I spend time with my family, and they live here too, fortunately for me.

Who were you listening to when you started getting into music?
The bands that originally got me into music like Shellac, Sonic Youth and Sebadoh were bands that had a pretty simple format as far as how they functioned as a band, and their recordings were pretty raw-sounding, but still sounded totally different from the average rock band on the radio. That’s the difference between this record and previous records, there is not really any instrumental, electro beat things going on. There’s not a lot of background bleeps and bloops, just straight up guitar, drums, vocals.

Where do you commonly look for inspiration?
Lyrics are pretty difficult for me for the most part. A lot of times they come last, especially on this record … just because I don’t read much, and I don’t feel like that good at expressing myself through words. I tend to take a lot of time playing around with it. On this record, I kept things fairly abstract, and I kind of disconnected myself personally.

You spent a few years busking early in your career, what did you learn from that experience?
Busking kind of was the thing that originally broke me out of my shell as far as performing goes. I had a pretty massive problem with stage fright. I started busking somewhat to pay my rent. I was working at a pizza joint and there was a busker outside. His guitar case had more money than I’d made that evening just by playing Barenaked Ladies covers. It was a totally amazing and uplifting experience, just meeting people was awesome, the real contact, and being able to practice and find out what people really like on an honest level.

So are you happy where your career is at right now, or are you set for world domination?
I am totally amazed that anybody cares about anything any more. I have to say I feel pretty lucky. I have an amazing life — a beautiful family, and I feel like I lucked out with people I work with at Sub Pop and Flemish Eye. If anything got any bigger, I’d probably try and sabotage it.

Have you played NXNE before?
I feel like I have but maybe I haven’t. But I love toronto, it is awesome. There are beautiful people in Toronto. I’m excited to come there for many reasons. Julie (Fader), my friend, just had a baby with her beautiful boyfriend Graham. I just want to see its face, touch it, feel its magic.