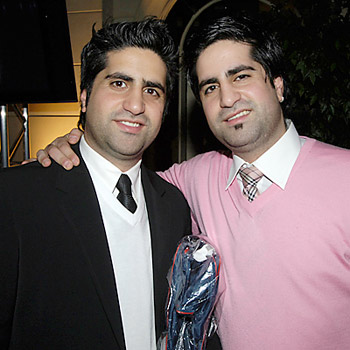 ACCORDING TO THORNLEA Secondary School graduates Page and Jian Magen, high school was sometimes a challenge. The Thornhill twins say they often got into trouble for socializing and took six years to graduate because of poor grades and discipline problems.

“We enjoyed high school as a social experience, rather than [an] educational [one],” Page recalls. “We were causing problems and being a little crazy.”

But when the opportunity to organize an after-party for the high school fashion show came their way, suddenly the Magen brothers’ outgoingness and people skills became a help rather than a hindrance. They were tasked with getting 300 people to attend the event. In the end, 1,700 showed up.

“We went out to every single high school in the area and handed out flyers,” says Page. “And after that we were the real deal, throwing parties every month. We became the all-ages party guys.”

The duo say they initially built up their reputation by hosting the best all-ages parties and bar and bat mitzvahs in town. To date, they have hosted more than a thousand such events.

Though their time at Thornlea was sometimes tumultuous, Page says he fondly recalls classes with his favourite teacher, Mr Liepner. “He taught business and law,” says Page. “He gave it to us straight; he gave us a chance, heard us and listened to us. I think that’s really important.”

Page says the best lesson he learned from his high school experience was that he had to be resilient and forge his own path. “I learned to not be afraid,” he says. “And that it’s okay to take chances. We want to keep going, and we’re very motivated and excited to create new opportunities.”

The brothers both agree that the most rewarding part of their current success is that their parents can see what they have achieved through their hard work and perseverance.