Lights: The Juno Award winner tells us about her fourth studio album | TRNTO.com
Skip to content 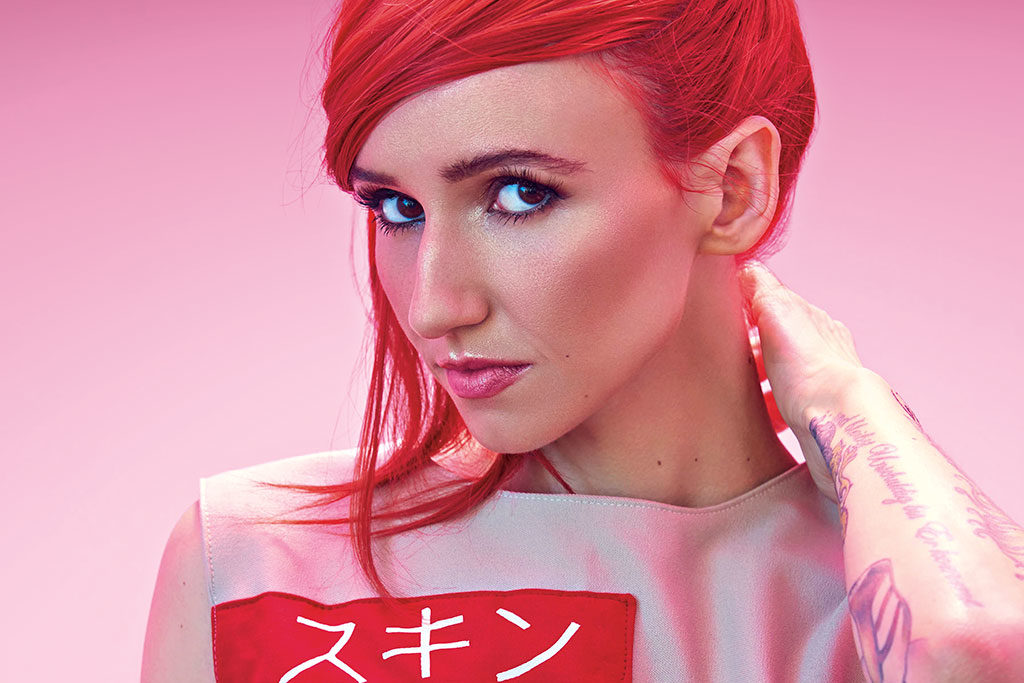 Canadian alt-pop princess Lights has been busy since the release of her last Juno Award–winning 2014 album Little Machines. In the last three years she’s been working on her first concept album and fourth studio album, Skin&Earth.

Not only did she drop this new record on Sept. 22, but all summer she’s also been slowly feeding us a six-part comic series that corresponds with the album. The immersive, multimedia experience created by this dual release marks an unprecedented level of creative output for Lights (a.k.a. Valerie Poxleitner). The comic series is currently available for purchase through Dynamite Entertainment.

Since relocating from Midtown Toronto to Mission, B.C., the now crimson-tressed singer has undergone a three-year period of immense personal and creative growth. Lights attributes much of this evolution of spirit and artistry to the birth of her first child, Rocket Wild, with husband Beau Bokan.

“I have never owned my creative power, my sexuality and my career more since becoming a parent. It’s a degree of liberation you get from stripping away narcissism. My world has never opened up the way it has since I was a mother,” she says.

The highly anticipated new record, already meeting some critical praise, keeps true to Lights’ electro-alt pop origins; however, Skin&Earth boasts a bevvy of songs with a slightly edgier and more controlled feeling, offering a sophisticated sound, unmatched by previous efforts from the artist. The artist attributes this shift in sound to the medium of a concept album.

“Singing through the lens of a character allows a degree of separation lyrically,” she says.

This is the first time in her career where she’s decided to sing, not as herself but, as a character. And that concept is giving this record a vibe that distinguishes it from her three previous albums.

Lights, who picked up a guitar at a young age, kicked off her professional music career in 2007. She dropped her first album, The Listening, in 2009, and picked up the Juno for Breakthrough Arist of the Year that same year. Her second album, Siberia, came in 2011 and was certified gold in Canada the following year.

She’s toured the globe performing for fans and is currently hitting venues across the U.S. throughout September and October. She’s known to put on a good show, as she often switches from guitar to keyboard, all the while singing, in her live performances.

Aside from her talents as a musician and performer, Lights has now added illustrator to her repertoire with this multi-faceted album release.

Lights began her journey to fully fledged comic book artist in June 2016. She was drawing constantly, each page took 10 hours. The budding illustrator took her new craft seriously: taking webinars and writing workshops and dedicated herself to learning the specs and techs of comic publishing.

Lights wrote, drew, inked and formatted each page of Skin&Earth, all on her own.

“Usually you’ll at least have one person writing and another sketching and inking, if not three separate people,” she says.

Skin&Earth, the six-part comic series, follows a girl with flowing scarlet locks, looking curiously like Lights herself. The heroine navigates a bleak, post-apocalyptic landscape, overrun by corporate greed and extreme classism. Although the setting is permeated with a sense of hopelessness, the story also has a raw romanticism amidst the desolate, morphine-fuelled society.

The themes Lights conjures in this series are obviously relevant, but they also subtly touch on the struggle with mental health and depression, both from an internal and an external perspective.

“My story was cool because it allowed me to speak on these topics without having to make a political album,” she says.

Although she was born in Timmins, Ont., and raised in the Philippines, Jamaica and Canada, Lights did spend many of her formative years in Toronto living in Midtown. Although the scenery in her new hometown of Mission, B.C.,“is out-of-this-world beautiful,” the musician admits that she does get a little stir-crazy sometimes and misses the hustle and bustle of Midtown, where she lived alone in her 20s. She recalls paradoxically enjoying peace and quiet, alone in her apartment, amidst the buzz of the city, like white noise in the background.

From time to time, she also has hunger pangs for Ramen Isshin, on College, and the nachos at Sneaky Dee’s (she is the mastermind behind their Cactus in the Valley Nachos).

“Toronto is still one of my three top favourite cities,” avows the devoted expat, when asked if she prefers Toronto or B.C.

Above all, the universal message of Lights’ tandem album and comic series release, both in the content and the sheer act of creating such an immersive imaginative reality, is one of perseverance. Lights’ lead character overcomes her greatest obstacle to find love, in a hopeless place. Both in the story and in her life, Lights worked hard and persevered to create something she is truly proud of.

The multimedia artist intends to continue down the road of building concepts from the ground up, taking on all aspects of the creative process, from writing, to sketching, to inking and on to the recording studio.

Perhaps we will see more worlds made by this talented Canadian performer.

Until then, you can find the comic Skin&Earth on Dynamite Entertainment. The accompanying album, Skin&Earth, features the lead single “Giants,” as well as “Skydiving” and “New Fears,” and is now available on iTunes and all major streaming services.

Lights wraps up her current tour in Wisconsin on Oct. 26, and fans here will be waiting patiently for a Toronto show to be announced so they can see this new character perform live.