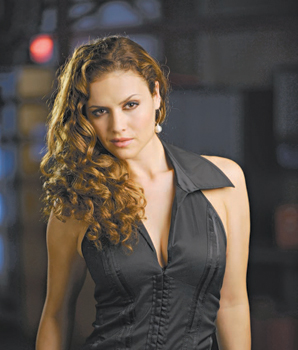 NORTH TORONTO’S LISA MARCOS speaks in weighty sentences, and not just for a former model, from whom one might expect simpler-than-Styrofoam sound bites. The female lead of the CTV summer series The Listener meets me for coffee near her Yonge and Eglinton home, and as she recounts her life story — by turns shocking, sad and triumphant — her solemnity and maturity say it all: the young woman sitting opposite has been through enough to fill her 27 years many times over.

At the tender age of 13, when most girls begin experimenting with makeup, separating boys from cooties and taking an interest in their appearance, Marcos was in Milan, Japan, Spain, Germany and beyond, posing for Vogue and starring in commercials as an international model — and all of it without a parent in sight. Every young girl’s dream come true, right?

Not exactly, says Marcos. “I literally had to pay my rent, wash my clothes, do my homework … and my focus was to make money so I could bring it home. And that’s why I never got involved with the parties and the men and the drugs and all that, which is so easy to get sucked into, and knowing that I didn’t have a parent and no one watching me, I could have if I’d wanted to.”

When her parents split, Marcos, then 11, enrolled in a fashion course at her aunt’s urging, to learn about “makeup, how to stand up straight, walk straight and all that stuff,” she says. Soon after, she entered a modelling competition, but the odds of winning were daunting: from a field of 3,500, only a few contestants would be offered modelling contracts. To her surprise, she placed second, and agents quickly swooped in with contracts. The opportunity presented a way to help relieve her family’s financial burden (“we were very poor,” she says), plus it offered a change of scenery from the divorce troubles at home. While teachers, friends and certain relatives outright disowned her for choosing a career some equated with prostitution, Marcos’s strong relationship with her mother (“she’s my girl,” Marcos says, “the strongest person I know”) and her deep faith (“I believe God opens up doors, and sometimes you don’t understand why”) helped to keep her focused and away from the hazards of such an environment.

"I never got involved with the parties and the men and the drugs and all that, and knowing that I didn’t have a parent watching me, I could have if I’d wanted to."

Marcos has no regrets about the decision she made. While it cost her a normal childhood — her last full year in the classroom was Grade 6 — she says the early tumult makes her current success that much sweeter.

“I really feel like, if I hadn’t gone through all of that, I wouldn’t be in a place today where I can enjoy the moment,” she says. “I just remember the days when I was so broke I couldn’t afford a cup of coffee.”

The Toronto-based Listener centres on Toby Logan (Craig Olejnik), a paramedic with a vigilante streak who uses his handy mind-reading ability to solve crimes. Marcos plays Detective Charlie Marks, who finds herself perpetually flummoxed by and privately thankful for Logan’s timely insights.

The mind-reading element of the show unfortunately echoes more established series The Mentalist and Heroes, but Marcos, Olejnik and Toronto’s Ennis Esmer are bright spots as rising Canadian talents. While the show was recently dropped from NBC’s summer lineup, about half of the season did air, giving Marcos and her co-stars exposure in the crucial markets south of the border.

Toronto, which plays itself in the series, also received its close-up, with the CN Tower skyline, montages of passing TTC streetcars and buzzing downtown intersections linking scenes. In one episode, Det. Marks responds to a crime scene in Chinatown, where the “905 crew” is suspected of foul play. In another, Esmer’s and Olejnik’s characters debate whether they should go out to the Rivoli (“bands, ten-dollar cover, but it could suck,” says Esmer) but then opt for the Madison House.

Marcos relishes the chance to work in and show off her hometown. “There was a picture of our city in the newspaper the other day and I kept it. We really do live in a beautiful city,” she says. “For years, we’ve been playing it as something else. I think we have a great opportunity to let people around the world know what we do here.”

Marcos’s Yonge and Eglinton condo puts her within walking distance of her favourite breakfast spot (the name of which she’s reluctant to divulge for fear it’ll become too known), the Mount Pleasant Cinema, great antiques shopping and world-class restaurants. She loves the Taste of Eglinton festival and the nearby parks, and she goes out of her way to drive along the Rosedale extension. “It’s home,” she says of Toronto, “a place where, no matter how bad they treat you anywhere, when you’re home, it’s almost like a safety blanket.”

But for 10 lonely years, home for Marcos was whatever hotel the modelling agency had put them up in that week. When Marcos touches on such memories, her delivery slows and her lips purse ever so slightly, signs that the trauma of having had to grow up far too fast still lingers. “There are stories I don’t share with everyone,” she says at one point.

Still, she reveals partial anecdotes of some of the perils she faced as a youngster abroad — memories of roommates who got hooked on hard drugs, others who sold themselves to further their careers and of creepy male predators lurking at every turn. “I’m the girl who got locked in a train car by a strange man in Germany,” she says. In another instance, a photographer asked her whether she would call the cops if he touched her (“Yes,” was her reply). And when she was 15, an agent told her she should consider cocaine to keep her weight low.

“These people … are like hyenas. They come in packs and they just want to tear every piece of skin off of you,” she says. “When you’re that young, even if you’re 18, 19, that stuff eventually wears you out, and if you’re not strong enough, it will have you thinking differently. That stays with you. That scars you. So you really have to get in the frame of mind where what they say really doesn’t change who you are.”

If anything is certain, it’s that Marcos, like her strong-willed character, has a clear sense of self.

Coffees nearly empty, I ask if there’s anything else she’d like to add. Often it’s a request for a plug (“Can you say something about my new fragrance/clothing line/movie?”), but Marcos offers a suitably weighty closing remark:

“For every person who’s had it rough or every child who’s dreaming, if it can happen to me, it can happen to anybody,” she says. “Just keep your heart in the right place and make sure it’s open with love.”