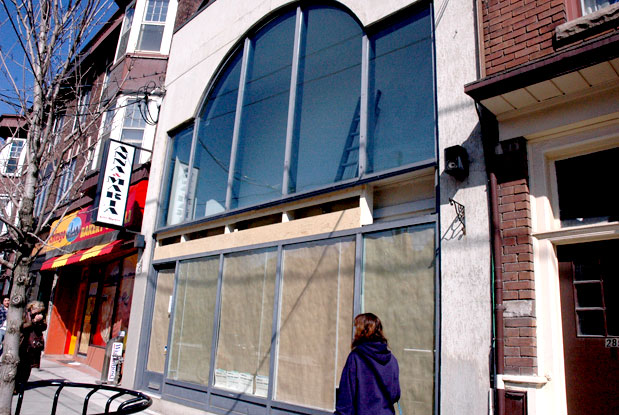 Smock, which calls itself a “café and wonder workshop,” is a work in progress. In around six weeks, the large, airy location on Roncesvalles will be transformed into a family-friendly café-cum-creative space, but for now the wooden counter is still rough and the unfinished floor is littered with paint and tools.

But after a brief tour with owner Sara Wood, one can almost see her vision emerging from under a layer of sawdust.  “I describe it as a cross between an apothecary and vintage candy store,” says Wood of her new project. “I want this to be a place where parents can come to hang out while their kids have fun.”

Once the construction debris has been cleared, Wood plans to install a small seating area where customers can relax with a coffee, alongside what she has dubbed the “wonder workshop,” a space where children can have a go at assorted arts and crafts. When we visited, light from a wall of glass bricks at the back of the large space was flickering on a column that will soon be home to a marble run and a small alcove that will eventually become a reading nook. “I’m going to put the shelves of supplies right on the glass brick,” she explains. “That way, when the light shines through the colors will reflect everywhere.”

Wood, who studied at the National Ballet School and George Brown College’s theatre program, has been involved in the arts for many years. She was inspired to open the cafe after the birth of her daughter four years ago. “New moms spend a lot of time online and there were so many products available, but nowhere to go,” she says.

Wood is also not new to the food industry. She was previously involved in Les Louises, a catering company she began with her sister and a friend, though she sold her share after having her daughter.

Of the café’s location, Woods says that she knew she wanted to be on Roncesvalles from the start. “I’ve lived here for almost 10 years and it’s a great neighborhood with lots of young families.” After spending the better part of a year negotiating the lease, Wood finally secured her ideal space in what used to be a Polish gift shop.

While the main floor will serve as the café and crafts centre, the lower level will house a studio and small lounge area. Wood plans to hold classes and day camps in the studio. One idea in the works is Tutus and Tiaras, a summer camp workshop by National Ballet dancer Krista Dowson, where kids will make their own ballet costumes and learn a few steps.

Another event Wood is excited about is Thursday dinner and sing-a-long evenings led by children’s entertainer, Rob Joy, which are expected to kick off in the fall.

While most activities planned are intended for children, Wood hopes to get a liquor license and slowly integrate non-child-oriented activities, like an improv night.

After battling a series of obstacles, this Toronto chef has successfully opened a gourmet gastropub