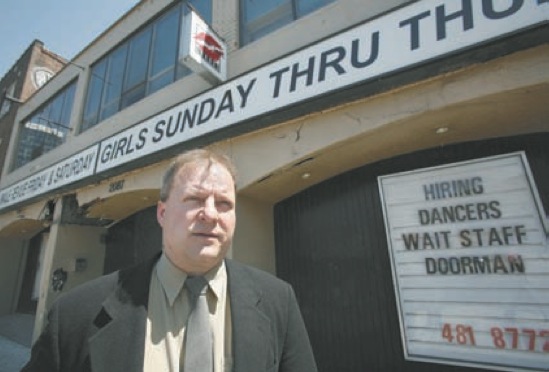 IT’S THE LAST dance for Mystique Lounge. The strip club on Yonge Street, which has unravelled as much controversy as it has skimpy outfits, may be out of business. The black wooden doors at 2087 Yonge St. have apparently been permanently shut since December.

Have residents chased the club with the red kiss mark on its sign right out of their family-friendly neighbourhood?

“This isn’t the demographic we’re hoping to attract to our neighbourhood,” said Jordan Applebaum of the Eglinton Park Residents Association.

“I’m a father of two, and I’m glad my kids won’t have direct exposure to that and what it might bring.”

The club was previously known as Cheaters until the last owner took it over in 2004, said Tim Lambrinos, the executive director of the Adult Entertainment Association. The association includes 14 active strip clubs out of the 18 in Toronto. Mystique was not a member.

Lambrinos said it’s not for certain the club is shut down for good, but he has heard from employees that it closed. He said the club owner had “impeccable credentials,” when he applied for membership to the association, but that he had changed his mind about joining.

“It was the first time in the business of an adult entertainment club, but he was a respected and successful business entrepreneur,” said Lambrinos. “We never had any complaints about Mystique. They ran a good ship.”

Several factors could have caused the closure, including the recession, according to Lambrinos. But what might have sealed Mystique’s fate is the theme of the club itself.

Lambrinos said that unlike Cheaters Mystique had an art deco feel to it, which was supposed to attract an upscale, Yonge Street and Eglinton Avenue clientele. But the idea never really took off, he said, and it was very different from any other club in the downtown core.

“He was very proud of how he developed high-backing chairs with velour,” Lambrinos said. “He felt this would be a market that would be reflective of Yonge- Eglinton. But the clientele he was targeting didn’t respond as reflectively to exotic dance adult entertainment as a mainstream industrial worker.”

The owner of Mystique Lounge did not return phone calls.

The club previously faced backlash from the community about parking issues, but Coun. Michael Walker said he hasn’t received complaints from
residents in some time.

“We had a relationship thatseemed to be working because I haven’t had any complaints recently,” he said. “It’s changed hands over the last several years. We had a lot of cabs on the side streets, but it worked itself out.  We don’t seem to have a lot of cabs parking in the district any more.”

“ The clientele he was targeting didn’t respond as reflectively to exotic dance adult entertainment as a mainstream industrial worker.”

Still, Walker said the club’s departure is no big loss to the neighbourhood. He feels that retail and condominiums could be a better fit.

“This spot has been approved for redevelopment. Maybe its time has come,” he said. “We’ll be waiting with apprehension to see if there’s other use proposed. The best use is not a strip club; it is a condominium development.”