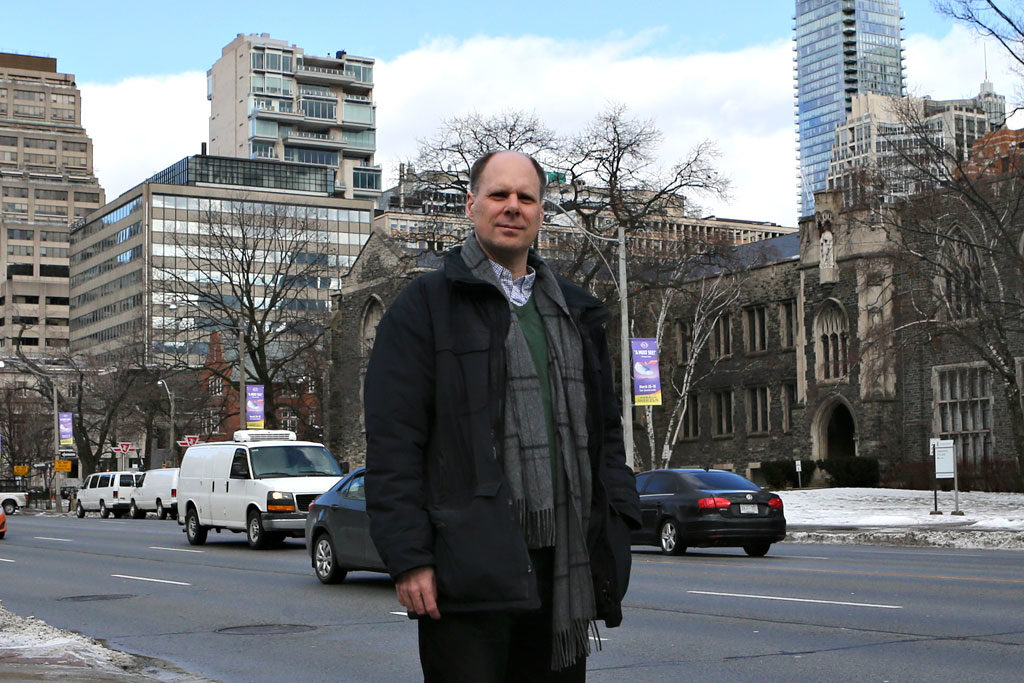 The City of Toronto provides mechanical sidewalk snow clearing in most parts of the city, but its website states that the city is unable to provide the service in the downtown core and some midtown neighbourhoods.

“The city will claim that the sidewalks are too narrow and have too many obstacles and that there is nowhere to put the snow because there is no boulevard space between the sidewalk and the street,” said Dylan Reid, spokesperson for Walk Toronto, a grassroots advocacy group trying to make Toronto more walkable that has advocated for the city to clear downtown sidewalks.

In Toronto, residents and business owners are responsible for clearing ice and snow from sidewalks adjacent to their properties within 12 hours of a snowfall or they face a $125 fine.

John Plumadore, head of the Deer Park Residents Group, recently launched Cleardeerpark.com in an effort to obtain the same services he says neighbouring communities get.

“We think that city bylaw is inappropriate because it discriminates against residents in some neighbourhoods and not others,” said Plumadore.

“Forest Hill gets all their streets plowed yet Deer Park doesn’t. So our neighbours are getting plowed, and we’re not.”

“Forest Hill gets all their streets plowed yet Deer Park doesn’t. So our neighbours are getting plowed, and we’re not, and we feel, as property taxpayers, we’re entitled to the same service,” said Plumadore.

Reid noted insufficient plowing can result in serious problems for those with mobility issues.

“You just need one person to not clear the sidewalk to create an icy patch that would be dangerous to, say, a senior or somebody who has difficulties walking,” said Reid.

According to a Toronto Public Health report from October 2016, between 2006 and 2015, there were almost 30,000 emergency department visits and 2,800 hospitalizations among Toronto residents from falls on snow or ice, with older adults being particularly vulnerable. These injuries cost the provincial health-care system almost $4 million per year. Slips and falls on ice cost the city about $6,700,000 annually in liability insurance claims.

“[Former] mayor Mel Lastman used to joke that in North York the snow was cleared before it hit the ground,” said Filion.

Filion agreed that plowing services are not equal across the city but chalks it up to differences in neighbourhood conditions.

“We have equipment, we have sidewalks that are wide enough, and generally we don’t have street parking,” said Filion. “So we are able to use sidewalk plows to clear sidewalks, and we do, and generally people are quite happy about that in Willowdale.”

Toronto–St. Paul’s Councillor Josh Matlow doesn’t buy the narrow streets argument and said that European cities have figured out ways to provide all sorts of services on narrow medieval streets. According to Matlow, he and other councillors have brought forward motions in the past to make service more equitable and provide it to streets across the city but that the mayor and council have voted against these efforts.

“Rather than just say ‘No, we can’t do it,’ I’d rather hear, ‘If we are to do it, what does that mean?’ ” he said. “What are the costs? Give us the reality of it, and then we can make a decision as a council about whether we believe it’s a worthy investment.”

Matlow, who believes cost is major factor influencing current policy, plans to address the issue again during the next budget cycle.

“I don’t accept that in a Canadian city we can’t clear the freakin’ snow,” said Matlow.