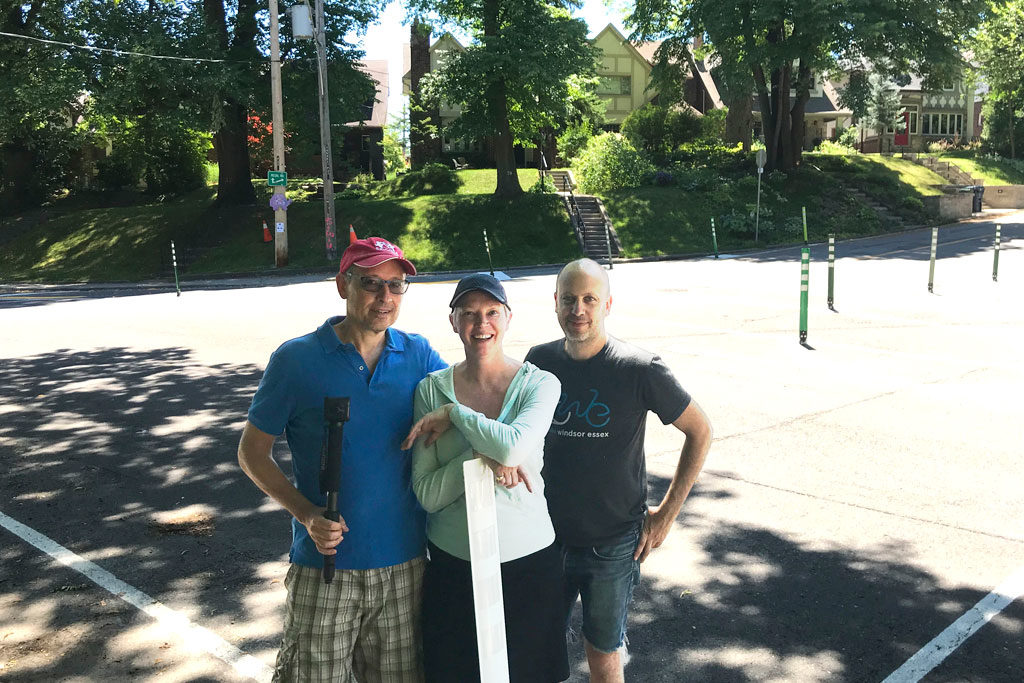 As if on cue, a few minutes into an interview with Regal Heights neighbourhood resident and community activist Dave Meslin about a local intersection redesign at the corner of Regal Road and Springmount Avenue, a couple of young men drive by the newly designed intersection in a van and comment  “stupid f***ing plastic things.”

Neighbourhood streets are increasingly dangerous, and with the city having a hard time implementing its Vision Zero agenda, local residents are creating their own solutions, whether it be signs telling motorists to slow down, or a hashtag inviting people to share their experiences of dangerous roadways. But when neighbourhood activism meets city bureaucracy the collision between the two can be “messy,” according to Meslin.

This is a neighbourhood, adjacent to Wychwood, with some history of community activism and public space projects.

Last year, he and a few of his neighbours got together and temporarily transformed the intersection of Regal Road and Springmount Avenue into something that put pedestrian safety first, while also highlighting the amount of wasted public space that could be put to better use.

Essentially, they rearranged the intersection with chalk and leaves raked from a neighbouring slice of greenery. The fix, though temporary, worked wonders and freed up a couple thousand square feet of public space. News of the project went viral. 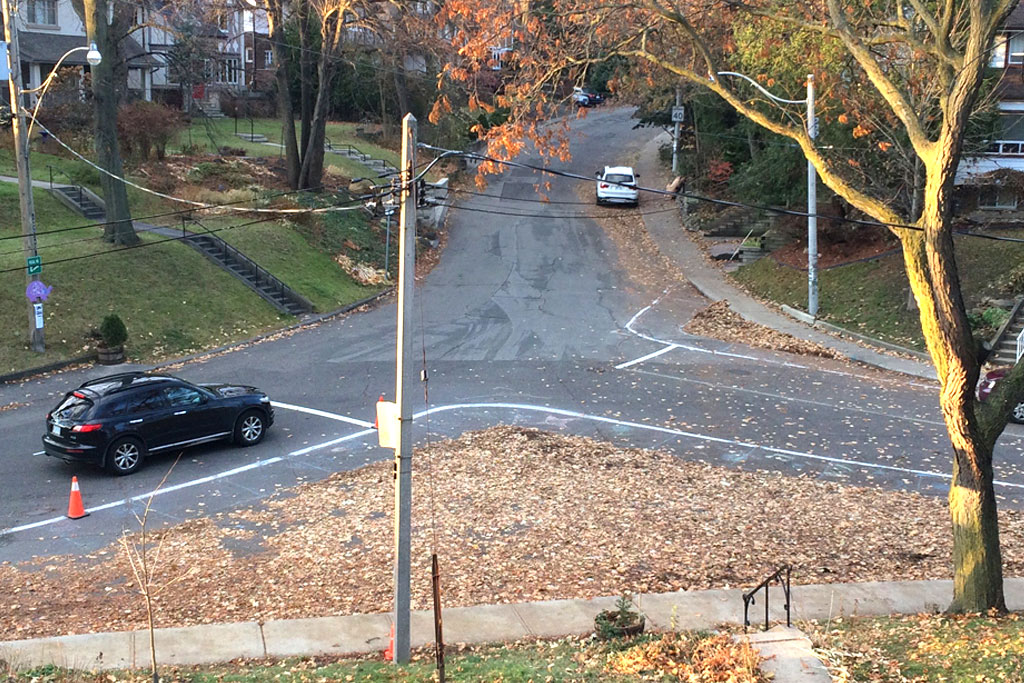 Meslin and residents redesigned the intersection with chalk and leaves in late 2017.

“It was a fun project and a way to point out to neighbours that there was all this extra space, and instead of pavement it could be who knows what: trees, grass, a merry-go-round, whatever,” said Meslin

After some consultation, the City of Toronto decided to give the large and dangerous intersection a look. Enter the stupid f***ing plastic things.

According to Meslin, the Regal Heights Gateway Project, when complete, will have greenery, flowers and trees as the focal point of a newly designed intersection that offers both safety and beauty.

“The first reaction from neighbours is that this is horrendous.”

But the city moved quickly on the safety side of the ledger, installing white plastic bollards and splashing down white paint with the green space enhancements not due until the fall. As a result, Meslin is knee-deep in neighbourhood complaints.

“The first reaction from neighbours is that this is horrendous,” said Meslin.

“It’s really ugly and unnatural,” added Allan Novak, another local resident who first spoke out against the project but has since come to understand the full scope of it.

“The final version will have no bollards, tons of green space, and it will be safer,” said Meslin. “To me, it’s about green space. Why have 2,000 square feet of concrete when you can make it green.”

As soon as the bollards went up, Meslin snuck out at night with a couple of cans of spray paint and painted the white plastic sticks green to at least blend in a bit more with the surroundings.

He also put up an information page on a pole outlining the plan to green the intersection and lose the bollards. Across from the utility pole, a large binder sits, offering a differing viewpoint of the project and instructing neighbours who oppose it to contact Meslin.

Some neighbours are concerned over losing a few street parking spots, some think the fix was unnecessary, and others think it is just an eyesore. Others love the safety aspect, including the curb ramps at an intersection that was once near impossible to cross in certain directions with wheelchairs or strollers.

Local resident Jennifer Wigmore, one of the chief leaf rakers of last year, said she spoke with city workers during the installation of the intersection.

“I saw them at the beginning and end of day,” she said. “By end of day, they said they couldn’t believe how many times they almost got killed. They were so upset by the end of the day.”

Meslin is set to follow up with city staff on the outstanding issues and said organizing a public meeting to more fully inform residents of the longer term vision is imperative and will happen soon.