Locals up in arms over new development | TRNTO.com
Skip to content 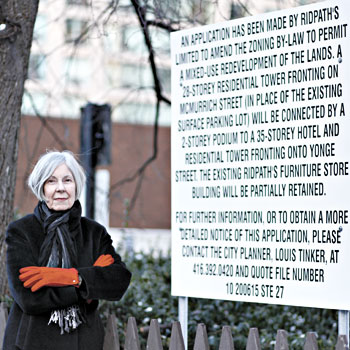 The owners of the century-old Ridpath’s Fine Furniture store want to see the Yonge Street and Davenport Avenue property converted into a 35- storey boutique hotel and 28-storey condo, but locals fear the proposal is too dense and will cause too many traffic problems.

“There’s a limit to how much streets can handle,” said Judy Dunn, who lives on McMurrich Street, which borders the property on the west side.

One-Ten Yorkville Limited, the company that owns Ridpath, submitted a rezoning application to the city last June that would see the historic building at 906 Yonge St. razed, in part, in order to make way for a hotel and condo project. Currently, city planning is preparing a preliminary report. The Ridpath proposal will likely go to city community council Jan. 18, said planner Louis Tinker.

Coun. Kristyn Wong-Tam said that after that meeting she wants to form a working group with locals to address concerns.

“Behind these major intersections, such as Yonge and Davenport, are residential neighbourhoods,” she said. “We’ve got to strike a balance.”Though the area is designated for intensification, there are already a few condo developments slated for the area, she added. David Tang, the lawyer representing the project, said development plans are still in flux and the owners are open to community input. “We want to hear back from the neighbours,” he said.

Another issue locals want to see addressed is traffic. Last fall, when the city began enforcing a left-turn prohibition onto nearby Belmont Street, Dunn said cars started taking McMurrich Street as part of a detour route. “Huge amounts of traffic are already whirring down this street,” she said. Dunn also said the condo proposal is just another indicator Yorkville’s historic past is being erased.

“I mean are they going to leave any of those charming little buildings at all?”she asked.“People don’t come to Toronto to see the high-rises.When they come to Yorkville, they want to see the quaintness of Yorkville.”