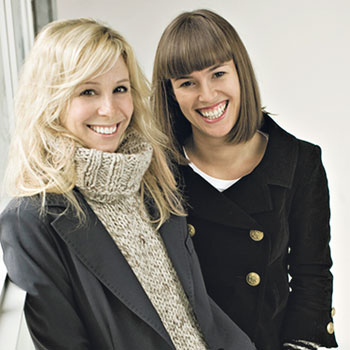 North Toronto residents Andrea Lenczner and Christie Smythe landed a major coup when the Duchess of Cambridge sported their signature tailored jacket during her recent Canadian voyage. Launching their fashion label Smythe in 2004, it wasn’t long before they saw their business skyrocket worldwide, counting the U.S., Japan and Hong Kong as just a few of the countries that have fallen in love with the duo’s stylish-yet-practical pieces. 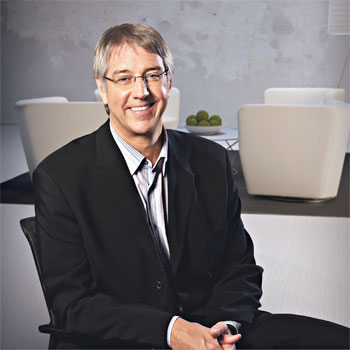 Boz Boards | www.bozboards.com
Mike Boz’s college pastime quickly became a full-fledged business opportunity when people took notice of his beautifully crafted and brightly designed longboards. For Boz, manufacturing locally means a better board: “Canadian maple is the most durable because of our short growing season.” That insistence on quality has garnered him some impressive fans, including star skater Steven Sanchez, who recently placed third out of 400 competitors in New York’s annual Broadway Bomb race — on a Boz Board, of course. 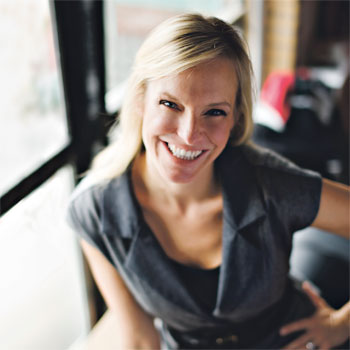 Julia Grieve has been reworking vintage threads into modern clothing since 1995. With her innate sense of style and passion for sustainability, the Midtown resident quickly elevated her line, preloved, from cult favourite of eco-enthusiasts to a major player in the fashion world, attracting fans like Anne Hathaway and Kate Hudson and teaming with Anthropologie and Holt Renfrew for their fall 2011 collection. Grieve says that, despite their worldwide success, continuing to create clothes in the GTA “just makes so much sense. It’s a hands-on product.”

Aviva Designs | www.avivadesigns.com
The world’s top dogs (and cats) can’t sleep on any old bed. Enter Nadine Tyshynski and Aviva Designs, which makes “kitty kouches and doggy divans” using the same high-quality materials as human beds. Pet owners love that the items can be custom designed to complement any home decor. Canadian flag mats are the newest products launched to great success: it’s rumoured that the Canadian Consulate in New York City has one for their dog in residence. 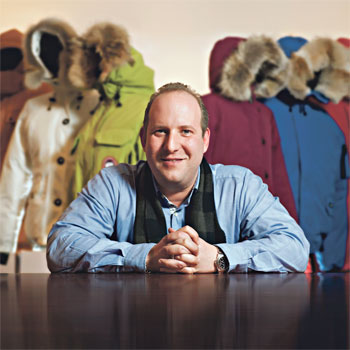 Canada Goose | www.canada-goose.com
For most Torontonians, wearing a Canada Goose jacket is de rigueur come wintertime. Founded in 1957 by the grandfather of CEO Dani Reiss, the company has grown into an internationally touted brand of quality and functionality with an all-around coolness factor. Reiss, a North York resident, decided to keep the company in Canada 10 years ago, in spite of a struggling economy, because “a move would have devalued” the iconic Canadian product.

Lilliput Hats | 462 college st. | 416.536.5933
Though mainstream fashionistas have only recently become fascinated with fascinators, Karyn Gingras has been designing ultra-couture hats for the past 18 years. All are meticulously made in her College Street shop, Lilliput, drawing celebrities such as Celine Dion and Whoopi Goldberg. The art of millinery may be expanding globally, but Gingras is proud to keep her goods local. “I live and work and am inspired by the city. My work reflects that.”

From our Village to the global village 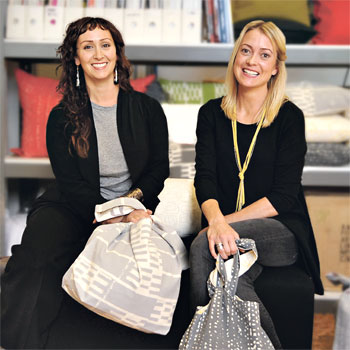 Fluf | www.fluf-design.com
In 2005, on little more than a whim, Nathalie Butterfield and Terra Kushner decided to give up their respective careers in law and interior design to create decorative pillows and bags. The duo have been making Fluf from their Village-area studio ever since. “We’re proud Torontonians,” says Butterfield, which explains why the partnership is determined to produce its unique eco-friendly products locally, and countries like Japan, Italy and the U.S. (home decor mecca CB2 is now carrying their goods) keep their pillows and bags in constant demand.

Cate & Levi | www.cateandlevi.com
As he awaited the birth of his first child in 2008, Josh Title discovered a lack of responsibly made toys. His concern led him to create Cate & Levi, a line of handmade puppets and stuffed animals, which quickly became an international sensation, selling in stores across North America and Europe, and attracting the likes of Martha Stewart and Sir Elton John. Meanwhile the eco-friendly products remain inherently Canadian: everything is designed and manufactured at Title’s studio in Toronto. 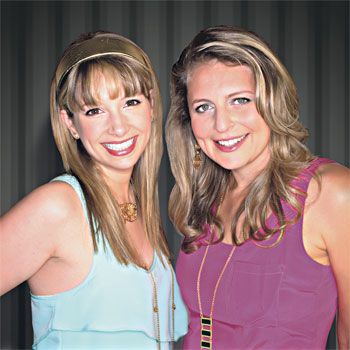 Foxy Originals | www.foxyoriginals.com
What began as a hobby for college friends Suzie Chemel and Jennifer Ger soon developed into a career when the duo launched their jewellery line, Foxy Originals, as a full-time operation in 2003. Since then, the Thornhill and North York natives have attracted international attention from fashion editors, stylists and famous trendsetters like Sienna Miller and Paris Hilton. The jewellery is sold in the U.K., Japan, Australia and North America, but despite the global fanfare, Chemel and Ger are steadfast in keeping their homegrown line just that: homegrown.

Shana Anderson | www.shanaanderson.ca
A recent OCAD graduate, Shana Anderson has already won over many fans with her funky lampshades painted with Toronto landscapes. All of her designs are created by hand and on computer from her downtown condo, and Anderson has the fabric handmade into light shades locally. Inspired by her surroundings, including local architecture, Anderson says, “My products are a reflection of my environment. I make my products in Toronto because they are inspired by Toronto.” 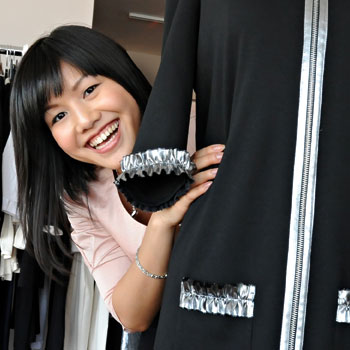 AIME Luxury | www.aimeluxury.com
Richmond Hill native Monica Mei keeps her clothing line, Aime Luxury, timeless and simple, using all-natural and organic fabrics. Despite achieving almost-instant success after graduating from Ryerson’s School of Fashion in 2007, Mei is adamant her garments remain Toronto produced. A proponent of “slow fashion,” she wants to reduce her carbon footprint and support the local economy. It’s no surprise then that Aime Luxury’s clothing labels read: Made in Canada — with Love.

Brothers Dressler | www.brothersdressler.com
The Brothers Dressler might be better known as Toronto’s favourite salvage junkies. Twins Jason and Lars have been crafting furniture from rescued materials and repurposed objects since they began their business nearly eight years ago. All of their custom-made sustainable furniture is designed and assembled in their downtown studio. Jason says it’s important to his customers that they are buying furniture made by people who live in the same city: “Our idea of sustainability extends to sustaining a community.”

Anne Sportun | 742 Queen St. W. | 416.363.4114
Anne Sportun lives and works within a small radius in downtown Toronto, but her “Experimetal” jewellery travels the world, selling in the U.K. and Japan and across North America. Sported by stars such as Julianne Moore, her unique pieces have made cameos in movies, on TV and were even featured on a Canadian stamp. For Anne, making jewellery isn’t just a business, it’s a creative outlet, which is why she’s been crafting locally for almost 30 years: “I dont want to do it any other way.

Ela Handbags | www.elahandbags.com
Though Toronto-based Ela Handbags is new to the fashion industry, its designer, Ela Kowalewska, is not. Having worked in public relations at Hermès and as a handbag creator at Roots, she brings a high level of sophistication and expertise that is evident in her cleverly crafted bags. With such attention to design, it’s not surprising that, in its first season, the company is already selling to retailers across Canada, the U.S. and Sweden. Kowalewska says that though producing locally is costlier, it gives her quality control.

Rufhaus k9 Couture | www.rufhaus.ca
“Who is your dog wearing?” is not your typical fashion query, but Serge and Katina Constantinou, the husband-and-wife team behind Rufhaus K9 Couture, is changing that with their stylish and sophisticated doggy duds. The entire line is Toronto made, from drafting patterns to manufacturing. Though their garments are in high demand throughout North America and in Europe, they don’t use mass production, so their canine coat bearers can feel special that they’re part of such exclusivity.

Julie Jenkinson | 33 Hepbourne St. | 416-537-9660
British-born Torontonian Julie Jenkinson is a prolific designer whose work covers many mediums. Best recognized for her textiles, Jenkinson’s wallcoverings and fabrics are getting a lot of attention lately and for good reason: her Animaze print is an intricate fusion of surrealist animal theme with vintage pattern style. The result is fresh, unique and would complement any home with room for ingenuity. Jenkinson’s talent is a highlight of the city’s contemporary design landscape.

Maiwenn Castellan | www.madedesign.ca
An industrial designer by trade, up-and-comer Maiwenn Castellan launched the Liam Mailbox last February and is quickly achieving widespread acclaim. Available exclusively at Made on Dundas, the quirky postbox is a fresh take on a classic. Every element is produced locally: the round body is spun in a small shop in Newmarket, while Castellan crafts the door and welds the metal herself in her studio. This month, she’ll be celebrated at the Design Exchange’s Capacity show, featuring Toronto’s top female industrial, graphic and textile designers.