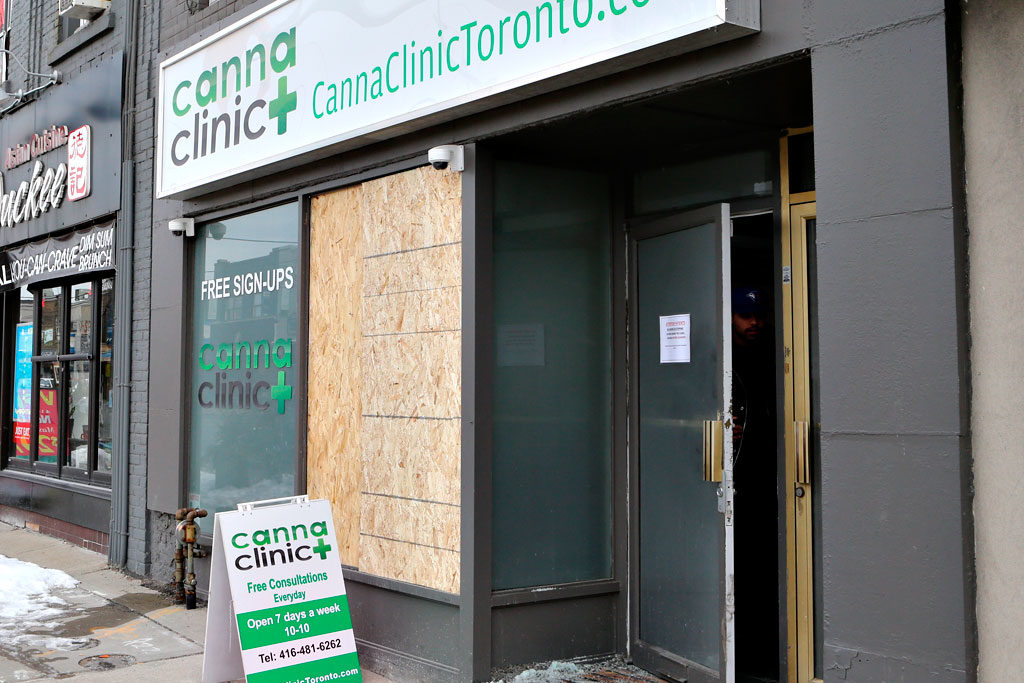 A marijuana dispensary in Forest Hill was the target of a burglary last month, in what Toronto police have identified as a string of armed robberies at illegal dispensaries across the city. The circumstances are complicated. Some owners are not reporting the crimes for fear of retribution by police, forcing investigators to rely on local witnesses to come forward. Meanwhile, residents are becoming increasingly concerned over the safety of their neighbourhoods.

On Feb. 15, around 9 p.m., police responded to a call about a holdup at Canna Clinic on Eglinton Avenue West just north of Chaplin Crescent. Constable Allyson Douglas-Cook, of the Toronto Police Service (TPS), said witnesses saw six suspects enter the establishment — one of whom was carrying a firearm. According to reports, the suspects left with a number of bags, and the owner and employees fled. No information was provided by the owner as to what was taken, and the investigation is still ongoing.

Local resident Miriam Rosenberg said the incident was disconcerting for the community.

“It worries me that this business is in a family-oriented residential neighbourhood, bringing crime and perhaps less desirable elements to a nice neighbourhood.”

Although Rosenberg acknowledged that she’s also heard of thieves targeting gas stations or breaking into nearby homes, she said she fears robbers are even more emboldened to steal from local dispensaries because it’s likely they won’t be reported.

At a press conference in January 2017, superintendent Bryce Evans said there have been 17 robberies at illegal marijuana dispensaries in Toronto since June 2016, with four of them occuring in January 2017 alone.

“During these 17 robberies employees and customers have been stabbed, pistol whipped and pepper sprayed,” said Evans.

“In at least 10 of those incidents, suspects were armed with handguns … [and] in two of those robberies, shots were fired within the stores by the suspects.”

Eight of the 17 robberies were not reported by the owners or employees, but rather by customers or other witnesses in the vicinity. In two of those incidents, the dispensary owners were charged by the TPS Drug Squad.

Marc Emery, a well-known cannabis activist and dispensary owner in Toronto, said he doesn’t make the distinction between robbers and the police.

“As long as police are the primary looters and pillagers of our businesses, we cannot possibly co-operate with these forces of oppression, looting and vandalism. Under the thin veil of the law, they are still an armed gang of people who hate us and use the media to demonize us,” he said.

Emery currently owns two Cannabis Culture dispensaries in Toronto and had previously owned and operated one near Eglinton Avenue West and Allen Road.

Michael McLellan, a spokesperson for the Toronto Dispensary Coalition, agrees with the sentiment.

“The police raids themselves are violent, and since criminals believe dispensaries will not have the support of the police, dispensaries are viewed as easy targets for robberies. Violence begetting more violence,” he said.

With many marijuana dispensaries netting between $10,000 and $30,000 a day, the illegal dispensaries are perceived as attractive targets for organized criminals.

“The reality is that, when there’s a large amount of controlled substances and money in one location, that is absolutely a target for certain types of suspects,” said acting inspector Steve Watts at the January press conference.

Ward 22 councillor Josh Matlow said he is fed up with the risk these businesses pose to the community.

“They should be shut down by the police until there are clear changes to the law with appropriate regulations that will protect the community and our kids and make sure that there are the right rules in place moving forward,” said Matlow. “Right now, it’s the Wild West, and there are far too many of these incidents occurring.”

According to Mark Pugash, director of corporate communications for the TPS, police officers are pursuing another strategy by visiting dispensaries in 55 Division to help staff put safety measures in place.

McLellan said this move by the TPS is a good first step; however, the trust level remains low.

“Until police and the city announce publicly that they are working together with dispensaries and dispensary staff are convinced that … the information provided [won’t be] used against them, there is a risk that criminals will continue to target dispensaries,” he added.

“They have an obligation to protect their employees and customers, yet too many of them seem to treat that with contempt.”

However, he noted that, when a warrant is executed, there is always the possibility that the owner can be charged.

“It’s a possibility, [but] let’s keep in mind that these stores are against the law, and they are enabling dangerous armed criminals. That’s on them.”

The TPS investigation is ongoing, and no suspects have been charged in any of the 18 marijuana dispensary robberies to date.

The owners of Canna Clinic did not respond to requests for comment.