MasterChef star Claudio Aprile is back with a new restaurant | TRNTO.com
Skip to content 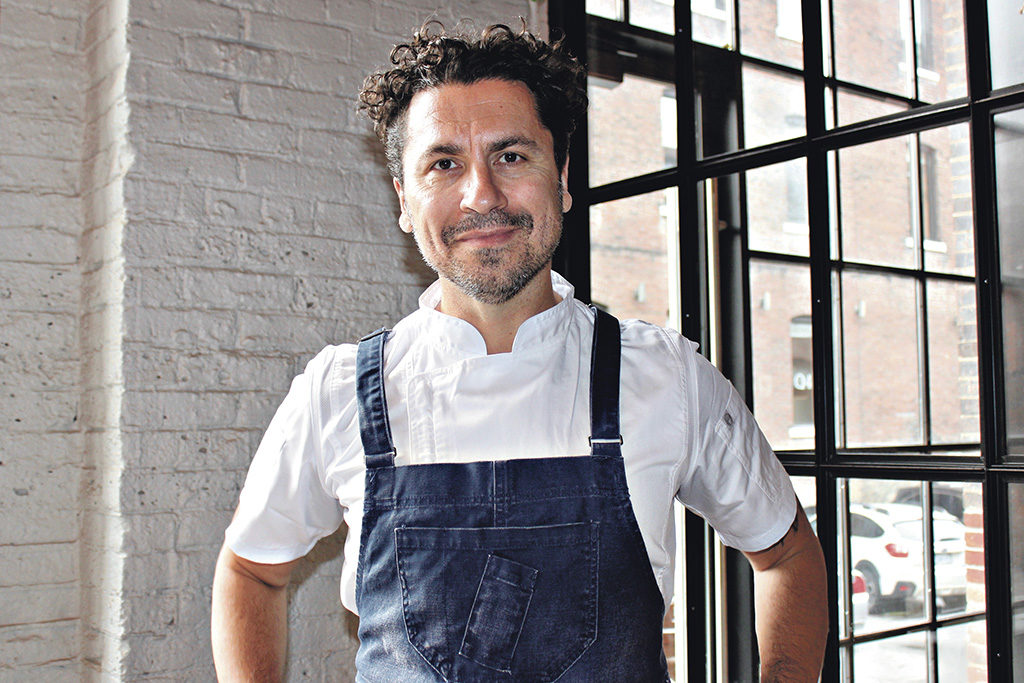 While any chef would be laid low by some of what’s happened to Claudio Aprile’s empire over the past two years, this MasterChef Canada star is letting go of past missteps and moving into the new year with a new partner, a new restaurant and a plan to take back his crown as the king of fusion food.

Xango (pronounced Chain-go) is Aprile’s first venture since the closing of Copetin, Colborne Lane and the Origin chain. Spearheading it alongside Liberty Group Entertainment moguls Nick and Nadia Di Donato, this is the most confident expression of culinary expertise that we’ve seen from the Uruguay born chef. In the former Brassai space, this new Latin American and Asian fusion restaurant is also what Aprile says is his most personal project yet.

“It all happened very organically,” Aprile said of the conceptualization of Xango and his partnership with Liberty Group.

After landing his first head chef position under Nick Di Donato in the mid-1990s, at the now closed French bistro Left Bank, Aprile and Di Donato stayed connected and over the years chatted about working together on a new project.

“This location popped up, and I thought it would be an amazing opportunity for me to work together with him and his team, and to enter into the King West community.”

The name Xango is also a personal nod from chef Aprile to the early days of his career, when he was working alongside talented chef Douglas Rodriguez (from New York City hot spot Patria). The two worked together in the early ’90s on a Toronto restaurant that was also called Xango.

“That restaurant was 15 to 20 years ahead of its time,” recounts chef Aprile. “I always thought it was such a shame that it never had the opportunity to exist in this city. Restaurants can be a reflection of what’s happening culturally in a city, and now is the perfect time for a restaurant like this.”

After the closing of Aprile’s last project, Copetin shuttered this year due to real estate challenges, Aprile is going back to basics and celebrating the city’s newfound love for flavour driven and exploratory cuisine. “Toronto as a whole is incredibly open minded when it comes to food experiences. I’ve been cooking for a long time and, you know, in the 1980s and 1990s, I found it more challenging as a chef to experiment,” he says. “Now,  Toronto is a versatile culinary environment and it’s happening from a chef’s point of view, and also from the public. We’ve all become a lot more aware and educated about food, and I think that allows for more experimentation.”

But this time around Aprile  is  not experimenting alone. “I think what makes the Xango menu the most interesting for me is that it’s one of my greatest collaborations.”

When building the menu for Xango, Aprile worked closely with chef de cuisine, Ivan Bailey. The Peruvian-born chef has worked under chefs such as Massimo Capra and Didier Leroy.

“He’s incredibly skilled. So far I’m really proud of what we’ve come up with. The flavours are just banging, you know? The food for me makes a lot of sense and I think it’s a very approachable menu,” says Aprile.

Dishes like the electric eel maki are as intricate as they are whimsical. Tempura charred unagi and avocado are topped with flame seared spicy fish tartar and a house made unagi sauce.

After extensive travelling in Thailand and a lifetime of exploring  the vibrancy of Latin American culture and cuisine, this menu is  strongly intertwined with Aprile’s history in the kitchen.

“There’s always an intention with both Asian and Latin American cuisines to really shine a light on flavour, more so I find than in European cuisine. French cuisine in particular I find to be a lot more subdued, more buttery, creamy, whereas the food from Latin America, Mexico in particular, Ecuador, is very bright, very big, very brash and I’ve always been drawn to those flavours,” he says.

Of course, when working with such intense culinary profiles some chefs err on the side of caution, whereas Aprile jumps right in.

“Balance for me is a very personal thing. I think it’s difficult as a chef to create, when you’re trying to explore new techniques and new flavour combinations. I think there’s always a challenge  that it may not resonate with everyone.”

But this hasn’t stopped the chef from staying true to his vision. “I’ve always been a very rebellious cook.  I like to create my own dialogue and my own approach to cooking and I have been — I think — very successful in doing that.”

As for the concept, Aprile says, “This is not fine dining. Our food is unapologetic. The flavours are big and bold, the presentation is rustic. I want people to feel a sense of mystery when they try to figure out how we got so much flavour into a dish. To make this a community hub for the area, that feels like you’re coming home.”

When asked about the trajectory of his career and the philosophy behind this new direction, Aprile is humbled. “It’s fascinating to think, when you’re in your career and your life you think, is my best work behind me or ahead of me and for me, I’m always restless and always trying to improve myself and my experiences.”

Excited and full of energy Aprile is grateful for the opportunity to cook in a city where his creativity is embraced and celebrated. “I’ve been cooking for 35 years and I am still surprised that people are interested in what I have to say and my food. It’s a gift to be in a career this long and still be able to capture people’s curiosity and I’m really thankful for that.”