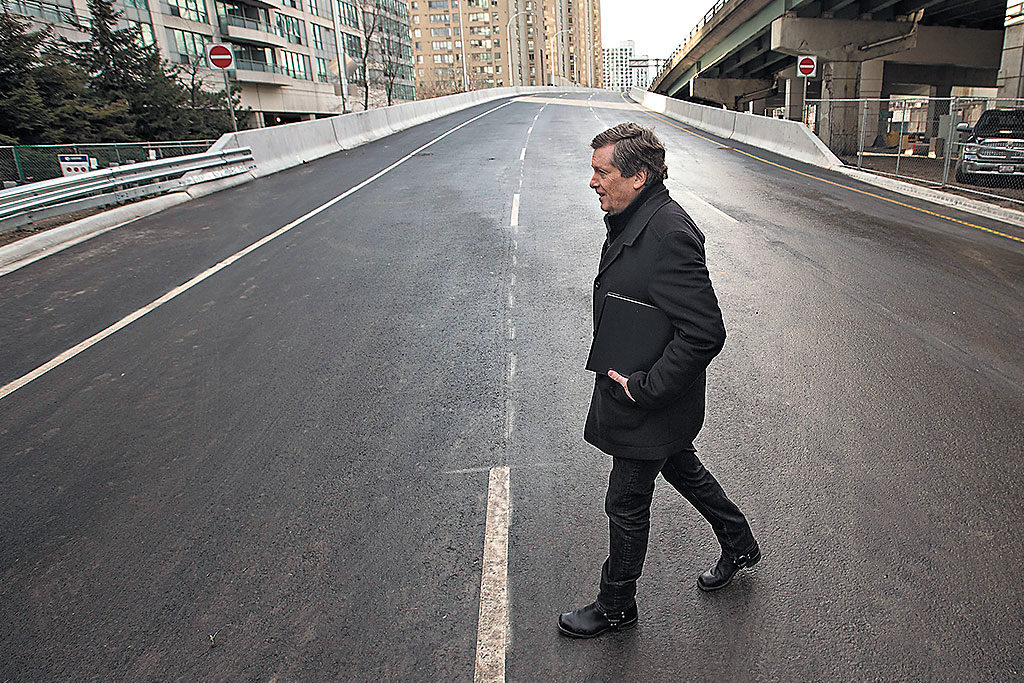 How do you respond to critics who suggest that your continual references to mental health issues could stigmatize the homeless?
I think anybody who evens suggests that, and I know it’s been suggested by a couple people, including in an article I think in Now magazine, that somehow I’m sadly mistaken or that I’m trying to stigmatize people, couldn’t be further from the truth. I will accept the fact that there will be some people for whom mental illness may have arisen as a result of homelessness. But I will suggest from my own conversations with people, when I visit the shelters and actually talk to them, that far more will say that their mental illness or addiction problems preceded their homelessness and was a contributing factor to their homelessness.

But why mention that so often?
One of the reasons I mention it so often, in the case of mental illness and addiction, is because there are people in the shelter system now in relatively large numbers, the majority with mental health issues, and were on ODSP [Ontario Disability Support Program], and so forth, but what they could not find was supportive housing. And that’s why I mention it, because it’s the truth.

How often do you visit the shelters?
I would say often. I won’t tell you I’m going once a week. But I’m going often through the course of summer and winter. The last time I was in one was two weeks ago — both the new women’s shelter on Davenport Road and the longer established women’s shelter that is on Dundas Street.

Did you see the hidden camera video that was sent around showing the sorry state of one of the respite centres?
Look, I guess, of course I would rather first of all that they didn’t exist, but second of all if more of them could look like the one on Davenport, which was brand new and not a chip of paint off that wall and so on. Interestingly, one of first things I asked about when I visited Davenport was where the storage space was for people’s stuff. And they showed me. And, although these rooms may prove too small for stuff, one of the big reasons why they [older shelters] look the way they do is not just because people are obviously living close together but also because they have a lot of stuff that is spread around that makes the places look, I think, like a place that isn’t necessarily welcoming as we’d like it to be.

How will you measure success in tackling this issue?
The one that is going to be the biggest and easiest to measure, with the size of the operation we are running now, is a decreased size in the shelter system itself because you have found housing options for those who are presently going to the shelter system as a place of last resort. Second is what I call the people living rough, street homeless. Easiest way there will be to see what the census says, but also just to look with your own eyes and see if there are fewer people who are sleeping on the street.

Why don’t we just increase the property tax and get those people in off the streets?
I would say to you, if you look at the value of the land that we put up, most recently the 11 pieces of land [City of Toronto’s Housing Now plan includes 3,300 units of affordable housing in mixed-use developments on city land. Construction will start in late 2020], a huge parcel worth hundreds of millions in value. And, on top of that, in order to increase the supply of affordable housing, we have agreed as part of that same program, further tens and ultimately hundreds of millions of dollars, to ensure they will remain affordable for 99 years. If you asked me, if I raise taxes, would I be able to do more? I’m not sure the answer would be yes.

Why is that?
[Because] it has nothing to do with money. It has to do with the capacity of the industry to actually produce [3,300 units of] affordable housing within the context of a viable business plan. And so that’s why we’ve gone with Housing Now as a first step.

Torontonians are frustrated and embarrassed by what is happening. What do you say to them, from your gut?
I’m not happy with it either, and I’m not proud of it. And I’m very concerned for the people, more particularly. I’ve been out on numerous occasions since I’ve been mayor, and indeed before, to talk to the people sleeping on the street. I’m obviously concerned about their well-being and more frustrated by the fact that, when you talk to them and ask what could we offer you to cause you to come in off the streets, they certainly don’t view the answer to that question as a shelter. In the end, those people want a home, a decent home they can stay in with some support associated with it, and that’s why I’m pressing hard for it. They need an affordable home, and we are in dire straits when it comes to a supply of that.