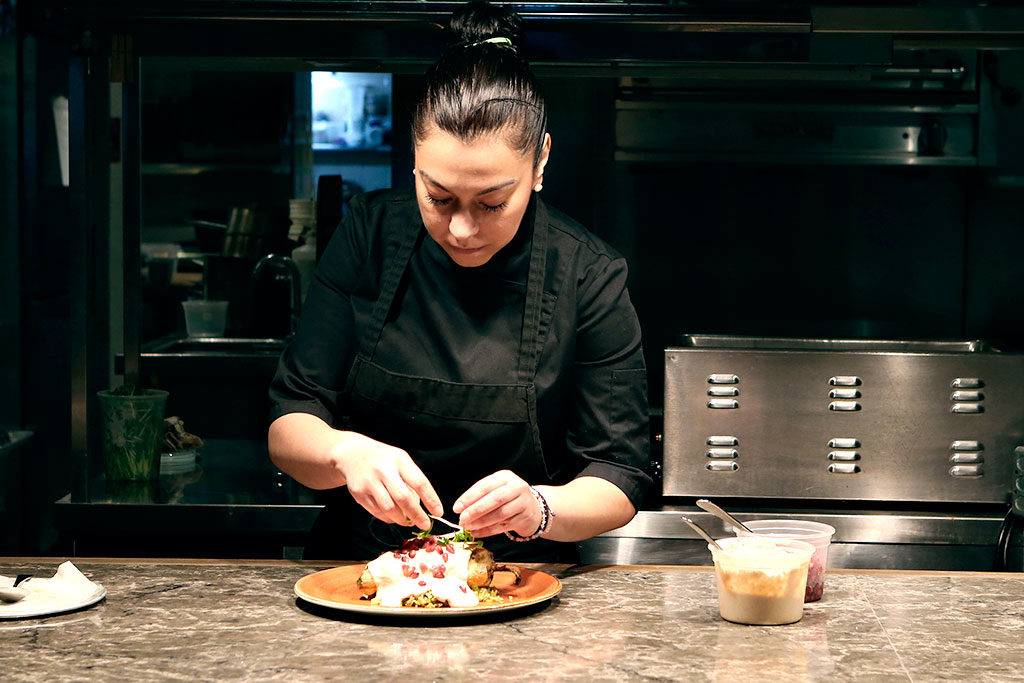 Chef Elia Herrera has been making chiles en nogada for so long she can’t remember the first time. The executive chef of Los Colibris and Top Chef Canada contender used to make it with her abuela (grandmother), who ran her own catering business in Mexico.

Herrera entered the biz through pastries, working as a pastry chef for 10 years across Europe and Toronto before opening Los Colibris and El Caballito at King and University in 2014.

Her recipe for chiles en nogada is her grandmother’s, who adapted it from a woman from Puebla City, the birthplace of the dish. Herrera spent the late summers of her childhood making large batches of chiles en nogada to sell, to give to family and friends and to keep for her own family.

Celebrated for sharing the same colours with the Mexican flag, chiles en nogada is a dish studded with pomegranate seeds on a soft white blanket of raw walnut sauce, under which lies a roasted and de-seeded green poblano pepper stuffed with marinated pork picadillo. When pomegranate season comes around in August and September, so come the calls for this nationally revered delicacy.

With 32 ingredients and different techniques for preparing each one, it is not an easy dish to make, nor a quick one. The process takes three days in total, involving roasting the poblanos and marinating chunks of pork to pure flavourful tenderness. There’s the whipping of egg whites, which are then folded with one egg yolk to create a light foam. And finally, the stuffed poblano gets dipped into that egg mixture and fried.

That’s just the basic architecture. Along the way are nuts both toasted and raw; fruits that are fried, dried, and fresh; and rice that’s been cooked in cilantro, garlic and spinach. Plus spices and herbs are added: thyme, cinnamon, star anise, black pepper, bay leaf, oregano.

“So the flavours are very savoury. It’s very aromatic, it’s sweet as well,” explains Herrera. “It’s a combination of sweet and salty, and it has some acid from the vinegar and a little spiciness from the poblano but not too much because poblanos are very mild.”

When Herrera moved to Toronto in 2003, she had trouble finding pickled jalapenos at the store. But, she says, in the last seven to eight years, interest in Mexican food began to grow in Toronto.

“Mexican cuisine exploded in a big way,” she says. “People are appreciating more the history behind each dish.”

Now, chiles en nogata remains a year-round staple on her menu because she can always find pomegranates. Lately, she’s taken her flavours to Top Chef Canada, currently in its sixth season.

“I opened with my family recipes, which have been proven.” says Herrera. “For me to compete, or collaborate or stage with other chefs, it’s an opportunity to learn and grow as a chef.”