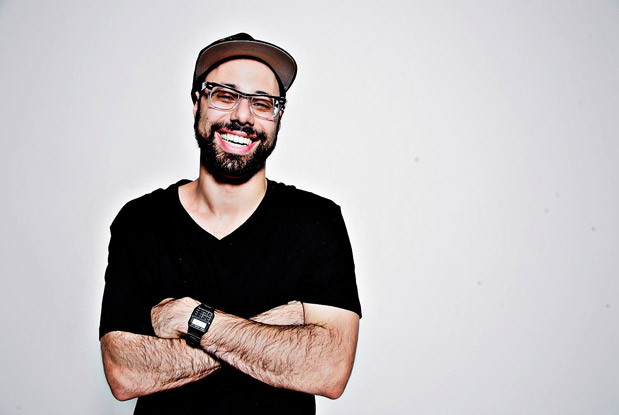 An in-your-face approach to comedy has made Toronto-based comedian Dave Merheje one of Canada's most original stand up acts. He produced the We Ain't Terrorists comedy tour alongside Ali Rizvi and is regular on the Just For Laughs circuit (he'll be featured at the fest in Montreal this summer).  Oh yeah — he was also just nominated for Best Male Stand-Up at the Canadian Comedy Awards.

We chatted with the comic about growing up in Windsor, odd jobs and his first time doing stand-up.

How did you get into stand-up?
I have always wanted to entertain. I used to do sketches when I was a kid with my sister and cousin. Then when I got older, I did comedy in my hometown of Windsor.

Describe your first time doing stand up.
It was at Yuk Yuks in Windsor. I was scared and nervous and it lasted four minutes. I mashed every joke together and I don't remember a response. I don't think it was good.

How would you describe your comedic style?
I would say conversational, ranty with high energy. I talk about my life experiences. Anything that happens, I say up there.

You talk about your family in your sets. Did they encourage your passion for comedy?
Yes, I talk about them for sure and they're real cool with it and encourage it. They even sit in the front row.

What kind of job(s) did you have before pursuing comedy full-time?
I worked at an Indigo bookstore and ShopDine [a touring company]. I also brewed beer for a week.

Favourite gig so far:
Just For Laughs in 2011. It's one of the top festivals in the world and the energy of fest was so amazing. I was also with comic friends out there, so it was cool.

Congratulations on your Canadian Comedy Award nomination. What does that mean to you?
It feels good because the other comics in the category are very talented and it's an honour to be mentioned with them.