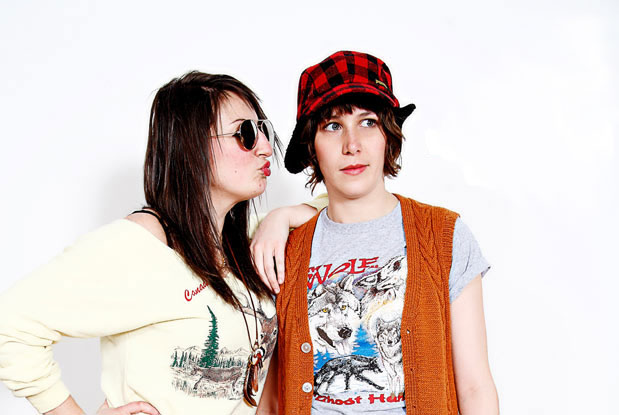 Movember has come and gone, but for Allison Hogg and Stephanie Tolev of the comedy troupe Ladystache, moustaches are a year-long thing. Having a knack for for performing TV-themed sketch shows (they recently did a Degrassi one at Comedy Bar), the gals describe their shows as ridiculously silly. We chatted with Stephanie about their favourite Degrassi episode and who has the best ’stache of all-time.

How did you ladies come together?
We started as a four girl improv troupe out of college, then we gradually turned into the duo.

How did you come up with the name?
We had a name that was not the most appealing and had to change it really quickly so I thought it was a pretty funny as I stroked my own [’stache].

How did Movember treat you?
Interesting. We did a few themed shows that ended up being a bit strange, however we did get to judge mustaches since we clearly have that authority.

How would you describe your brand of comedy?
It is very ridiculous and silly. We do a lot of character-based scenes that are very high energy and bizarre. We like to have fun with each other onstage and we like to bring the audience into that with us.

You recently did a Degrassi Jr. High-themed show at Comedy Bar. How did that go?
It was really great, such a fun show. It consisted of some of the best sketch troupes in the city and they all picked their favourite scenes and acted them out. We love doing themed shows. It’s a neat and different way to perform sketch. We have done Fresh Prince and Home Improvement in the past. Both were a real nice time.

What’s your favourite Degrassi episode of all-time?
I would say the one where Joey sells the drugs to Katherine and Melanie. Even though they’re just vitamins, it’s still really cheesy and overacted but that makes it so great.

Who would be your ultimate dream guest?
Martin Short for sure.

Who do you think has the raddest ’stache of all-time?
It would be a toss up between Tom Selleck and my father Peter Tolev — they are both thick and coarse.

What’s on the horizon for Ladystache?
We are just writing a lot of new stuff right now, getting a brand new show together and starting to think of the next themed show, which will most likely be Saved By The Bell. We are focusing on some Internet shorts and trying to grow our own moustaches for next Movember.