Meet a Comedy Troupe: The Sketchersons | TRNTO.com
Skip to content 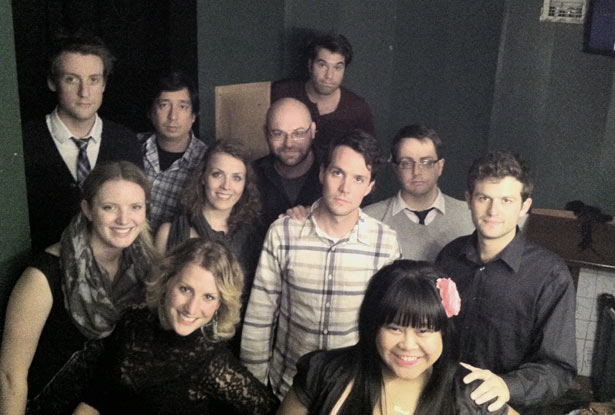 The Sketchersons, with its revolving door of local funny people, has been making audiences laugh for eight years and earning tons of accolades along the way (they’ve been nominated seven times for best Sketch Troupe at the CCAs). The troupe, along with its weekly Sunday Night Live show, are so ingrained within the Toronto comedy scene, that it’s actually quite shocking (read: embarrassing) we’ve never featured them before for this column.

We chatted with head writer Jon Blair about the troupe’s origins, its notable alumni, and having a football as a host.

How did you guys come together?
I wasn’t around, but as I understand it, the guys who founded the group were originally two separate sketch troupes who did shows together on a really regular basis, to the point where they actually started writing sketches for each other. After a while they just decided to merge everything together, bring in a few more people and start doing this show. Every couple of years we bring new people on. And that’s the story of our great tradition of being larger than two regular sketch troupes.

Sunday Night Live is obviously modeled after Saturday Night Live, but what makes your show different?
This probably isn’t a very smart answer, but I think the fact that you’re actually in the room with it makes the big difference. We aren’t writing and polishing and performing it for everybody in North America, we’re doing it for these hundred people in the room so we can do things we wouldn’t be able to otherwise. You’re really there with us at that show, which makes it more alive.

You’ve had a number of cast members come and go throughout the years. Who are some notable alumni?
Well, Gary Rideout, Pat Thornton and Tal Zimerman are some of the guys who started the show; they’re working on the Comedy Bar TV series now. Bob Kerr who’s over at 22 Minutes, Fraser Young, Nikki Payne, Gilson Lubin. Norm Sousa who’s at The Score now. A lot of us have also done The Second City mainstage, like Jason DeRosse, Inessa Frantowski and Carly Heffernan. We usually have at least one alum in there somewhere. I don’t know, I think all or alumni are pretty notable. You could literally note any of them.

You’ve had a number of hosts throughout the years. Give us a top 5.
We’ve had a little over 300 hosts, so this should be not at all difficult. I’ll for sure tell you the five that I like. We had Bret "The Hitman" Hart on twice and he’s just up for whatever, it’s always great. Same with Andy Kindler and Todd Glass, who both spent the whole day working on it with us and were really fun, which you don’t always get to do when people come in from out of town. So many of our hosts are local comics. Andrew Johnston and DJ Demers are two guys who we like to have back a lot. Actually you know what? Once we did a Super Bowl show and our host was a football. I don’t think the football got a fair shake, so, I don’t know, give the football Bret’s spot.

What would be the top five for musical guests?
There are a lot of bands who I call our "band-buds" (secretly), who we’ve just made friends with through the show and we have them back whenever because we know they’ll be ridiculously good. Some of those are The Wilderness of Manitoba, The Donefors, Donovan Woods, Joel Battle, and The Power of Equality.

And now who would be the ultimate guest performer and musical guest?
I would love to have Maestro Fresh Wes as host and as a musical guest, Sting-style. Has anybody done that since Sting? I feel like I need to update that reference.

What’s the most outrageous sketch from recent memory?
Well, last night we had one where two club district flower salesmen ended up making out and having simulated sex in the middle of the audience. So I guess whatever sketch we were trying to perform at the time!

Where do you find the inspiration for your sketches?
I think a lot of the members of the troupe draw from a lot of different sources, like local politics, people they meet at the day job, the deepest personal failings of another cast member, or how great drinking a million beers is. Personally I try to spend as much time half-asleep as I can, then I filter through everything I thought of. If something in there half make sense and/or is physically possible, then it’s on.

Why do you love sketch comedy?
I always liked sketch comedy as a friend but I don’t think I completely loved it until I started doing this show. It’s a circus. I think it’s the best ride you can take people on in an hour. You can give them something totally different every couple of minutes, but it’s also something fully realized, everything is its own big production. Also the fact that there are really no boundaries to it, and, also all the money.

Anything bright and shiny and new on the horizon?
The rest of this month is shaping up to be a really good one; we have our Just for Laughs show on the 23rd and we’re having the cast of Avenue Q come on as musical guests. One thing we’re working on a lot more now is improving our relationship with the Internet – we still don’t trust it, but, at this point, we admit it’s here to stay. So we’re looking at new models and formats of how to make ourselves more available over the Internet. Also I plan on ending on a joke, so watch out for that.