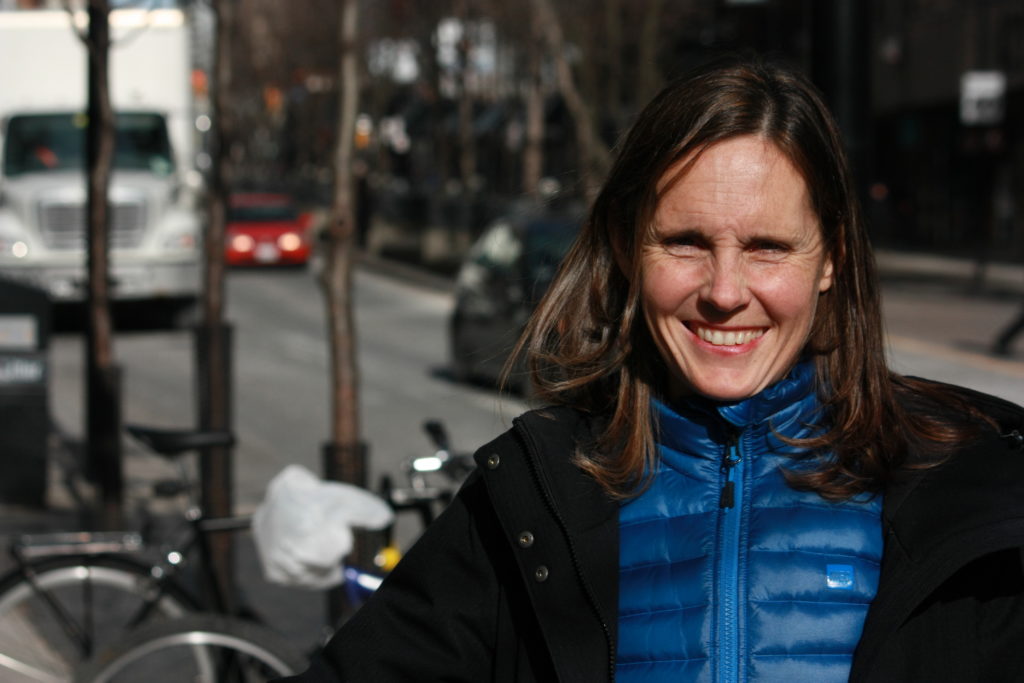 When Sarah Climenhaga decided to run for mayor, back in October, it wasn’t so much out of an a-ha moment, but rather a natural next step from what she was already doing, which was advocating for safer streets and progressive urban planning. She was canvassing door to door to gauge community interest in the Bloor Street bike lanes, and had been quietly thinking about running.

“I finished my canvas and I felt, ‘You know what, I think I could do this!’” she said, two days after she filed her official bid for mayor. At the time of her canvas, she’d already been aware of the changes that Toronto needed, and she discovered that she really liked talking to people about them. “So that was sort of really solidified it, where I had a taste of what door to door campaigning was and talking to people in that kind of situation. That solidified it for me.”

Climenhaga has lived in Toronto since she was six weeks old, and has been advocating for safer streets and urban transportation since the dawn of the millennium. She was part of the call to bring down the Gardiner Expressway east of the Don River, which came to pass in 2001. She rallied to get the St. Clair Right of Way put in in the mid-aughts. Before that, she worked at non-profits, including the World Wildlife Fund, Smart Commute, and Moving the Economy. And at a recent Public Works and Infrastructure Committee meeting to discuss a cityscaping that would dramatically change the look and feel of Yonge Street up in North York, she took her advocacy there. Having surveyed people on the streets and read the staff reports, she stated, calmly and respectfully and with informed assurance, what the experts had been saying for years: “Yes, North York should have its own downtown. Yes, North York should have its own Main Street.”

So when people introduce her as a mom of three, making her first steps into politics by trying to sideline John Tory’s reelection plans, they’re not wrong. But it discounts a lot of years of rallying for the issues this St. Clair and Bathurst resident believes could improve people’s lives.

“A traditional path in politics is school trustee, councillor, maybe MPP, then maybe, eventually, mayor. That’s the path for a career in politics. I’m most interested in the most direct path to change.”

“A traditional path in politics is school trustee, councillor, maybe MPP, then maybe, eventually, mayor,” says Climenhaga, two days after she filed her official bid for mayor. “That’s the path for a career in politics. I’m most interested in the most direct path to change.”