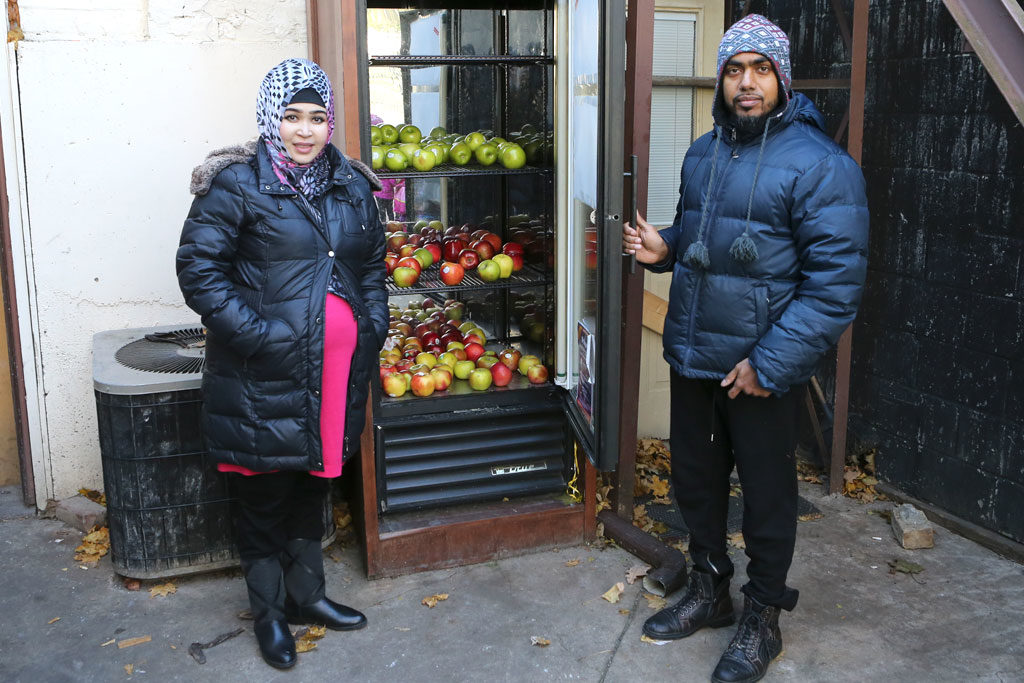 In the last few years, food waste has emerged as the king of all first-world problems, an ugly reminder that while some people live in poverty, others live in extreme excess. According to statistics from the City of Toronto, 57 per cent of all household food waste from across the city is edible. Nationwide, Canadians throw away $31 billion worth of food each year. That’s a lot of waste. The good news is that some inventive individuals and organizations are tackling the problem head on. These Torontonians are doing what they can to ensure that food goes to people who need it — not to landfills.

FREE LITTLE PANTRY
Inspired by the popular Little Free Library concept — which provides neighbourhoods with free books — Little Free Pantry is a collective of volunteer-built donation boxes stocked with necessities such as dry goods, produce, diapers and other supplies as availability permits. Anyone is able to access the pantry to take or donate whatever they wish, which provides local residents with either free supplies or a convenient way to share surplus items that might otherwise go to waste. What began as a pilot project in Fayetteville, Ariz., has spread throughout the U.S. and is now making inroads into Canada. North York resident Melissa Castanheira, steward of Canada’s first Little Free Pantry, at 232 Cedric Ave., says people often donate items that will soon expire, which helps reduce food waste. She says her community’s help in keeping the pantry stocked has been awe-inspiring. “As soon as I see the pantry empty, it’s full again,” she says. “This neighbourhood is amazing.”

ROAD TO ZERO WASTE
When Rexdale resident Laylo Atakhodjaeva noticed how much produce her local grocery store was throwing away, she was shocked. “In my home country, Uzbekistan, everything is recycled and used,” she says. “I’ve never in my life seen so much waste.” She began researching food waste statistics and decided she needed to take action. With the help of her husband, Shabeeb Hasan, she founded Road to Zero Waste, a non-profit organization that aspires to reduce waste — and hunger — across the GTA. Their largest initiative so far is a series of community fridges filled with surplus food from local restaurants and grocery stores. Accessible 24/7, these fridges are stocked by volunteers and can be used by anyone who needs food at any time. Road to Zero Waste has set up three community fridges across the GTA: in Parkdale, Rexdale and Mississauga, with more to come. Ultimately, Atakhodjaeva and her husband hope to pave the way toward legislative change that will reduce food waste, as seen in countries such as France, where supermarkets are banned from throwing away unsold food.

FEEDBACK APP
A few years ago, Forest Hill native Josh Walters was travelling through Rome when a restaurant owner offered him discounted pizzas that were about to be thrown away at the end of the day. Walters thought to himself, how often does this happen? Very often, it turns out. Soon, he contacted his cousin, Ben Walters, with an idea for a mobile app that would help connect people with surplus food from restaurants. In 2017, they launched Feedback, which uses a “smart pricing” algorithm that notifies users of deals during off-peak hours. Walters likens it to Uber’s surge pricing, but in reverse. The result, Walters says, is a win-win situation, with users getting deals on food, and restaurants having the opportunity to sell what they might have thrown away. “At the end of day, food waste [at the restaurant level] is just a product of a larger problem, which is unpredictable supply and demand,” Walters says. “The goal is to create a restaurant system in which you can use price as a lever to drive traffic at off-peak hours.”