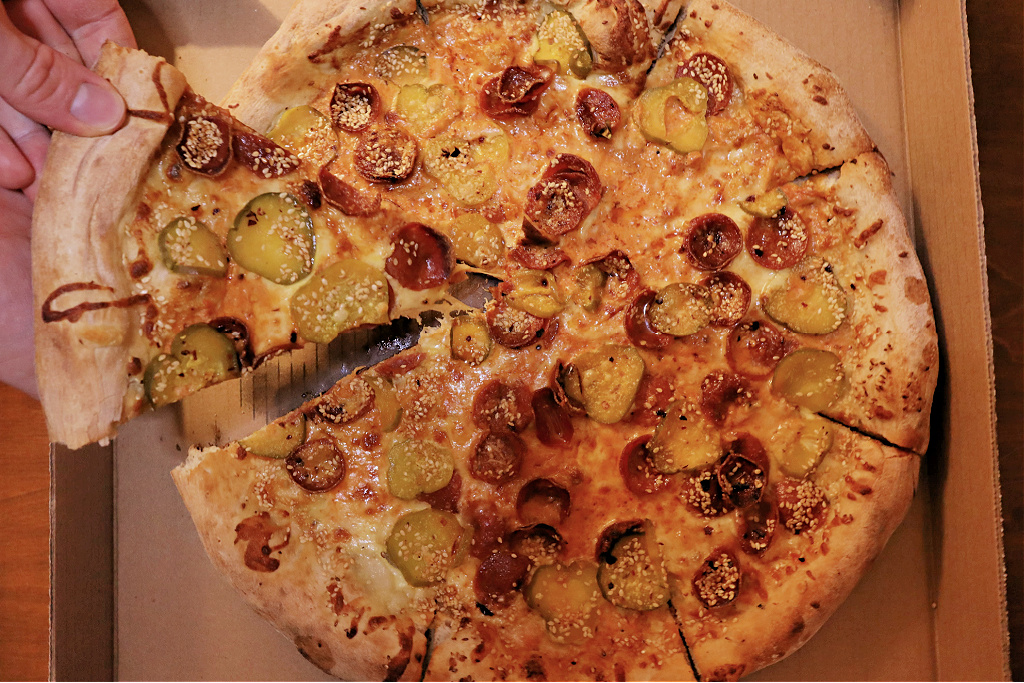 Mel’s Pizza is bringing a distinctive new style of pizza to Toronto. Pre-pandemic, Toronto chef Matt Sullivan went on a pizza research journey that took him from Windsor to Chicago, Brooklyn, Detroit and beyond. When COVID-19 hit, Sullivan focused on using his newfound pizza knowledge to create “a Canadian-style, nostalgic pizza” that would be well-suited to takeout and delivery. “A lot of different styles of pizza don’t really work for delivery. You have to have it when it comes fresh out of the oven,” explains Sullivan.

The pies at Mel’s Pizza feature a thin crust that’s crispy yet fluffy, made from dough that’s fermented for four days. The pizzas, all of which come in 16-inch sizes, are topped with organic mozzarella and sauce made from Bianco DiNapoli organic tomatoes. “We use really quality ingredients,” says Sullivan. “It’s crafted, thoughtful pizza.”

Some toppings pay homage to Canadian-made pizzas. For example, the Windsor pizza, which is inspired by the city’s iconic hometown pizza, is topped with tomato, mozzarella, mushrooms and chopped pepperoni. “A lot of Windsor expats are getting it and love it,” says Sullivan.

The Satellite, topped with tomato, mozzarella, ham, pineapple and bacon, is named for the Chatham restaurant where the Hawaiian pizza was invented in 1962. Mel’s Pizza also offers calzones and classic toppings like cheese and pepperoni.

Mel’s also regularly offers special secret pizzas by sharing a password via Instagram stories. Diners who order a standard cheese pizza and enter the password in the comments section of their form will receive the secret pizza instead. Recent secret pies have included a taco pizza topped with beef short rib braised in chipotle peppers, peperoncini, red pepper and shaved cotija cheese; and a clam pizza topped with clams in garlic butter and clam liquor, spicy vodka sauce, mozzarella and bacon.

Mel’s Pizza is currently available for delivery via Uber Eats, DoorDash and SkipTheDishes. Sullivan says they hope to eventually transition from a ghost kitchen to a brick-and-mortar restaurant when lockdown restrictions are lifted. “We have a pretty good following with a lot of repeat customers and we’re getting busier every day,” he says.