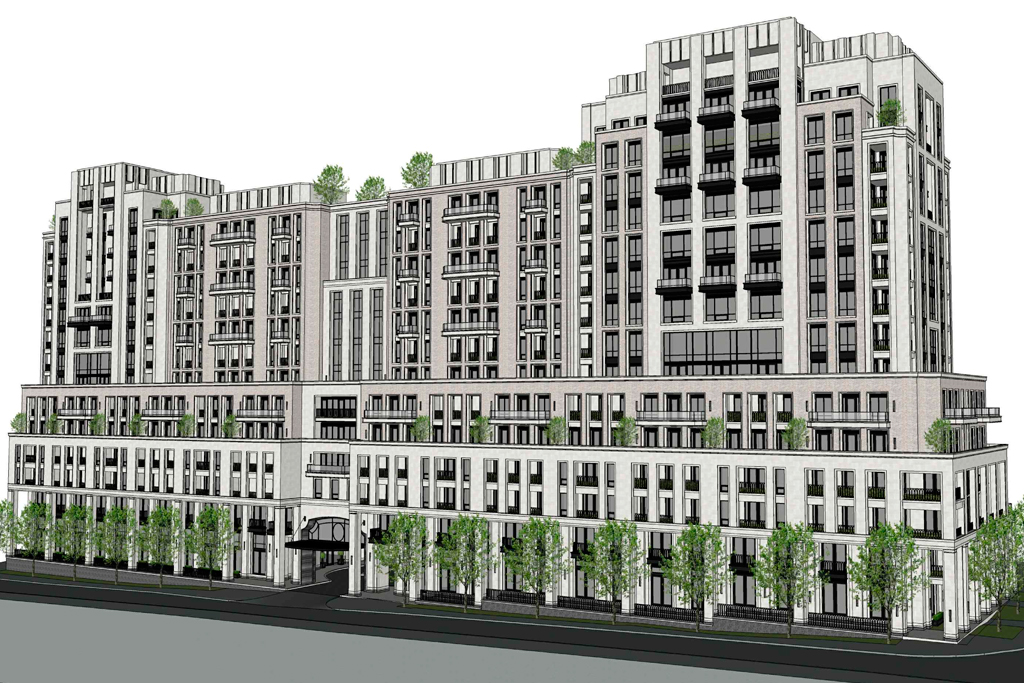 A new residential development is being proposed for St. Clair Avenue and Avenue Road that exceeds the city’s planning guidelines and is being called “disrespectful” by neighbours.

The proposal from Plaza Partners, in partnership with Main and Main and Woodbourne Canada, calls for a 13- to 15-storey building on 175 to 195 St. Clair Ave. W.

It would include 206 units, split between 70 one-bedrooms (34 per cent), 115 two-bedrooms (56 per cent) and 21 three-bedrooms (10 per cent). The developer has not decided on whether they will be rental or condo units.

“Our vision is to deliver a luxury boutique building that fits within the elegant architectural fabric of the neighbourhood,” the development’s website states. “Our proposal is ideal for downsizers looking to stay in the Forest Hill neighbourhood.”

The building features step-backs on its north and south sides and is mostly 13 storeys, except for additional height at the east and west ends.

It is designed by Richard Wengle Architect Inc., a well-known firm in the area that has mostly built large residential homes nearby.

The development would replace a number of buildings, including the First Unitarian Congregation church.

However, local councillor Josh Matlow said he cannot support the project in its current design given that its proposed height is almost double the city’s limit of nine storeys for the area.

“We have concerns that the development industry is continuing to try to set new height precedents above and beyond what is supported by our own professional planning staff,” Matlow said.

Matlow explained that the height restriction has been set by city planners that have taken into consideration how the area can grow sustainably, whereas the development industry is primarily motivated by profit.

He said that the height proposed causes some concerns, such as the possibility of shadows on the well-used Glenn Gould Park across the street, as well as overlook to neighbours to the south and greater traffic in the area.

John Curtis, who owns property directly to the south of the development site, on Lynwood Avenue, said the proposal is “downright greedy” and “disrespectful.”

“It will be as if a big Caribbean cruise ship pulls up and docks right on our fence,” he said. “All of their million balconies will be looking over the neighbourhood.”

Curtis said that the building as currently planned has no setback from his property and goes right up to the fence line, essentially “walling off” his property from St. Clair to the north. He is also concerned about pedestrian safety in the area given the likelihood of extra traffic and there being schools nearby.

In response to the concerns, Plaza Partners chief development officer Ornella Richichi said that they felt that the plan features an “appropriate height and transition” given the context of the tall neighbouring buildings to the east and west, and the section of St. Clair where the site is located.

She said that the development’s application took into consideration the area’s growth plans and they still felt the height is appropriate.

Concerning shadows and setbacks, she said that the proposal falls within city requirements and that the building itself is at least seven-and-a-half metres from the property line that separates the houses to the south.

She also said there will be “stepped-back” terraces so residents won’t be overlooking the houses.

The proposal is awaiting a preliminary city staff report that will go before city council in March, and then a community consultation meeting will be set, according to Matlow.