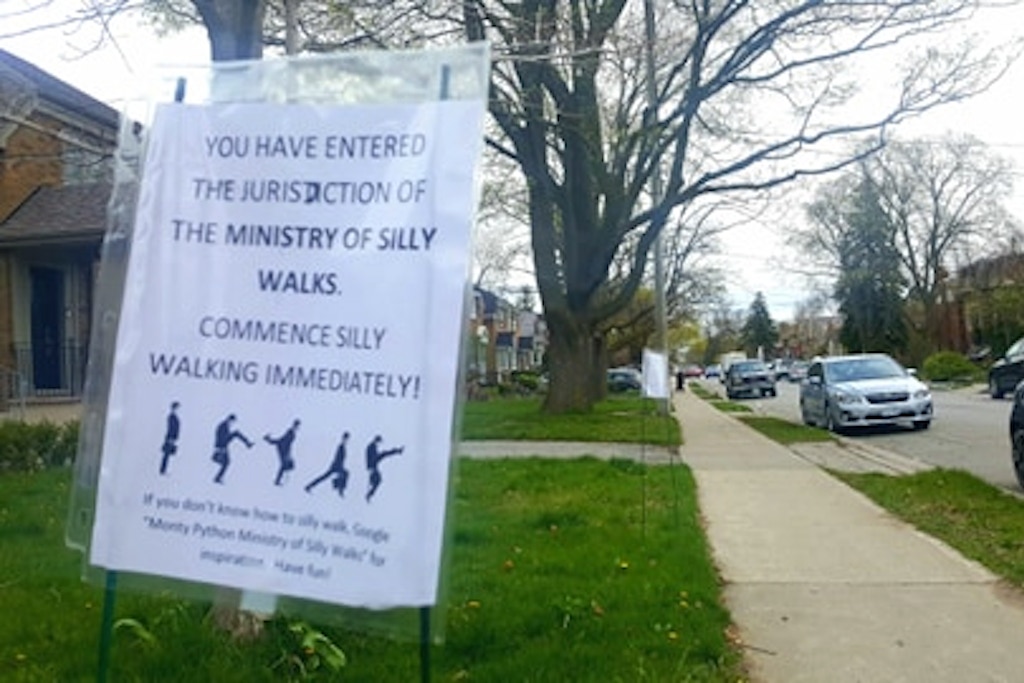 The silly walks quarantine-trend that stretches from England across the pond to the United States and Canada has come to the Toronto neighbourhood of North Leaside. Yes, the sleepy family node near Bayview and Eglinton has its own John Cleese-worthy zone, and people are loving it.

This hilarious social media phenomenon seems to have come from Yorkshire, England where one Monty Python-loving family put up a couple of DIY signs, created a hashtag, and let the amusement commence.

The post went viral.  Many of those who commented from cities around the world are intent on establishing their own zones in their hometowns.

Kicking off the silly walks with my husband tonight in the gorgeous sunset. Haven’t seen any other silly walks yet in front of the studio, but hopefully it makes people smile as they walk by! The car that drove by during my walk may have thought I was crazy… #sillywalks #ministryofsillywalks #montypython #montypythonsillywalk #pianocoachpnw #quarantine

In the Leaside community Facebook group, one commenter shared the Yorkshire post asking for someone to create an official neighbourhood zone. And, it didn’t take long before one was announced courtesy of Leasider Mary Simpkins near the intersection of Glenvale Boulevard and Beaufield Avenue.

“There has been lots of laughter and silly walking!” she says, since putting up the sign over the weekend. “People definitely still have a great sense of humour.”

The entire sensation is, of course, inspired by a Monty Python’s Flying Circus skit starring John Cleese who works for the Ministry of Silly Walks.