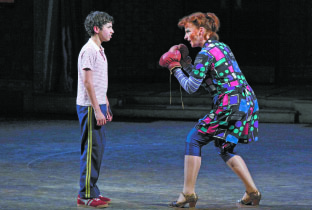 The big production this February has to be the arrival of Billy Elliot, an Elton John musical based on the joyous movie, in which an adolescent in a coal-mining village in England discovers his talent and passion for ballet.

I have not seen it, nor heard its music, but the musical drove both the critics and public in London, England, into ecstasy when it premiered in 2005.

And, it won 10 Tonys in 2009 when the production opened on Broadway. And it’s been sold out ever since.

Mirvish is bringing it to the Canon Theatre, and it sounds irresistible.

As the very tough New York Times critic Ben Brantley wrote in November 2008, “Your inner dancer is calling. Its voice, sweet but tough and persistent, pulses in every molecule of the new Broadway musical, demanding that you wake up sleeping fantasies of slipping on tap or ballet shoes and soaring across a stage.”