Mistura’s acclaimed chef Massimo Capra and the otherworldly beet risotto that started it all | TRNTO.com
Skip to content 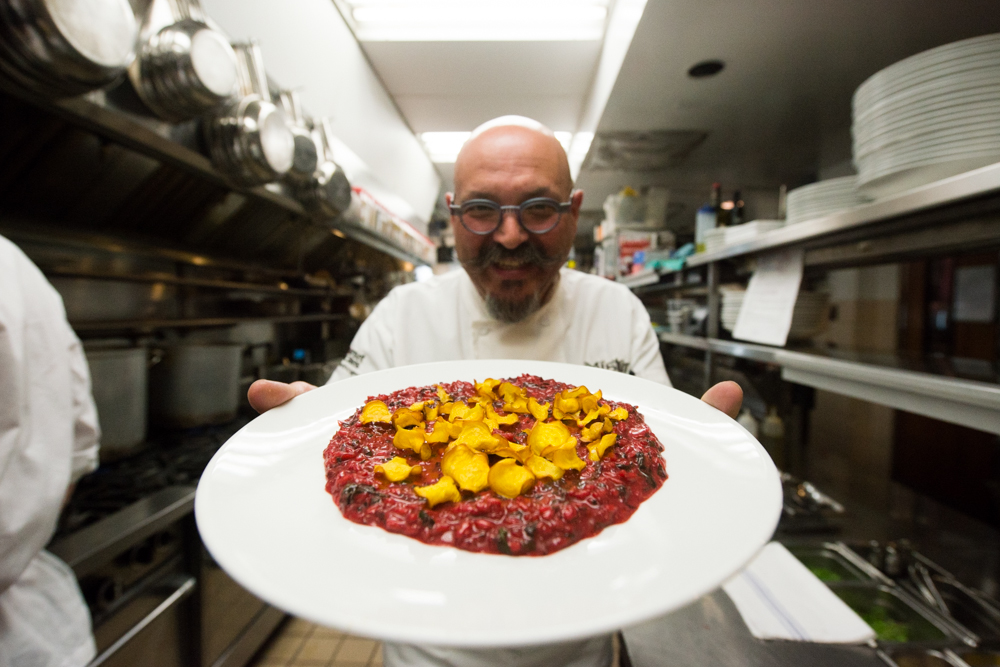 On a windy Thursday night, we duck into Mistura for a visit with chef Massimo Capra to talk about his signature dish, the red beet risotto. Fresh off the plane from a trip to Mexico shooting an episode of his show Gourmet Escape and before that, a “research” trip to Italy, for all his celebrity, he’s as hospitable and convivial as ever (also, his moustache is even more dramatic IRL).

“I started working on this dish 20 years ago when I was at Prego Della Piazza,” says Capra, an old Yorkville mainstay, where TIFF stars used to dine back in the day. “At that time, just before the '90s, there were hardly beets on the menu anywhere in town. We were having a special dinner where we wanted to do a dish inspired by Gualtiero Marchesi, where we would have five different risottos on one dish. That’s when we began trying the beet risotto.”

Capra first tried adding sliced beets but it made the risotto “muddy.” Then one night, Capra says, “I saw Jack LaLanne on a commercial with a juicer, so then I took beets and tried to juice them.” Slightly better, but still a little muddy. Then he tried boiling them and that’s when the magic happened.

The red beet risotto ($18 for an appetizer course, or $26 as a main course) has been on the menu at Mistura since it first opened and “has become a very big success,” says Capra. They make 15-20 on a regular day, and sometimes up to 40 on the weekend.

The dish starts with garlic, onions and beet tops. The rice is added, then beet juice and vegetable stock. It cooks for about 10 minutes and is then finished with butter and freshly grated parmesan—the natural way of getting that “creamy” consistency (contrary to popular belief, you don’t actually use cream to do this). It’s served in a wide, shallow bowl and is meant to be eaten with a fork – “you never eat risotto with a spoon,” Capra tells me, “it’s not a soup!”