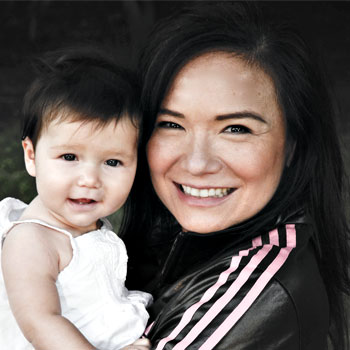 “THIS IS MY daughter, and this is my life. Deal with it,” says actress and television producer Jennifer Podemski, on her way to an audition.

“I’d just plop her car seat in the middle of the conference room table and get on with it,” she says, describing how she launched back into her full-time work when her daughter Willow (now eight months) was just two days old.

“When you’re self-employed, you don’t get a traditional maternity leave,” she explains. “I would schedule conference calls when I was breast-feeding her and arrange meetings around nap time.”

Podemski had seen other women put everyone else’s needs ahead of their own — which she was determined not to do.

“As I got older, I realized I had every right to live in a certain way.”

She works from home, so she asked her colleagues to come to her house to meet on projects such as executive producing the awardwinning National Aboriginal Achievement Awards, for the fifth year. She’s also into her seventh season of Degrassi: The Next Generation.

“I think I’m too big for that role right now,” she laughs, referring to the fact that she gained 80 pounds while pregnant with Willow, though she has shed most of it already.

Weight is something that has been a part of her performing lifestyle from a young age, and she admits that while she was pregnant the extra pounds didn’t bother her, but for about three months after she had the baby, she did feel down about how she looked.

And then she got a call from Sarah Polley for a supporting role in her second feature film, Take This Waltz, co-starring Sarah Silverman and Michelle Williams.

“[Polley’s] first question to me was, ‘Are you okay with a nude scene?’” says Podemski.

“I told her I had just had a baby and had skin sagging down, and then I decided. I said, ‘If you don’t mind the way I look, then I don’t mind.’” She did the nude scene and felt stronger and even more confident in herself as a result.

Even someone as strong as Podemski seems can fall into the trap of “mommy guilt,” but she stresses that she has less of it than she thought she’d have: “Because I work from home, I get to see her all the time. I’m lucky to have child care in the house, which allows me to stay focused when I need to.”

Focus could be a challenge for someone working on so many different projects, but for Podemski it’s a natural way to run her life.

“I was aware at a very young age that I wasn’t amazing at any one thing. I think I’m what you might call a natural multi-tasker. If I only had one thing to focus on at a time, it just wouldn’t work for me.”

She’s also extremely happy to have secured a book deal for Tales Behind the Loincloth, an anthology that will feature essays written by 16 Aboriginal actors and will touch upon how they deal with being in that profession from a native perspective.

“I’ve wanted this to happen for a long time,” she says, and one definitely gets the feeling that, if Jennifer Podemski wants it, it happens. Deal with it.