Monday night's all right for dining in Toronto | TRNTO.com
Skip to content 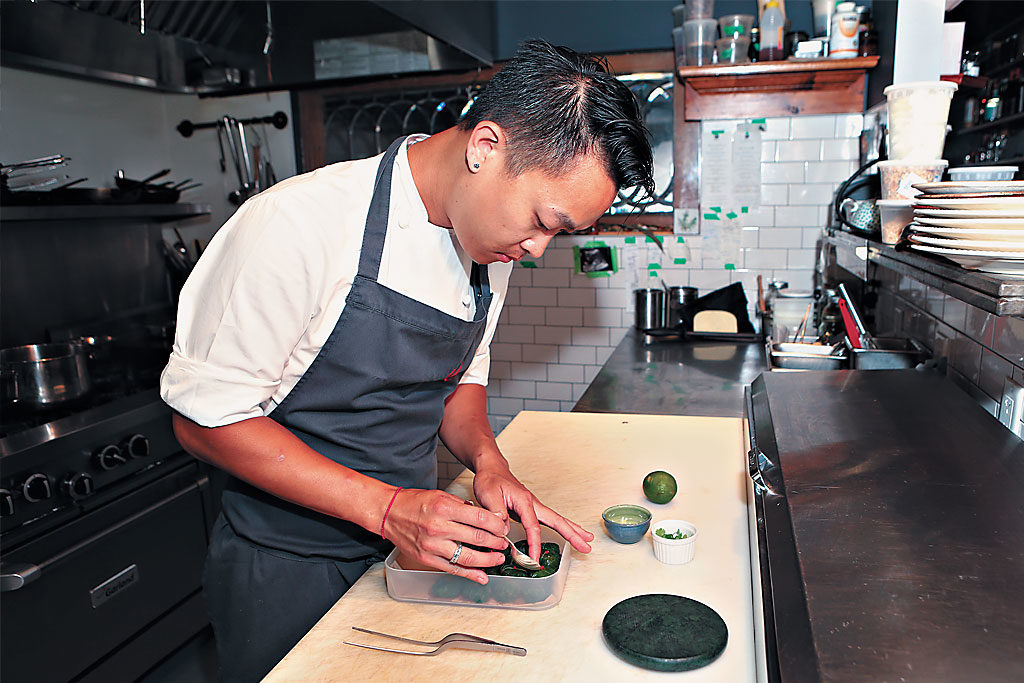 If you listen to conventional wisdom, Mondays are the worst nights to eat out. It used to be that deliveries came on Tuesdays, so restaurants were perceived to be serving leftover produce and  protein. And so, Mondays became prime couch and Netflix nights. However, rising rents have forced experimental and ambitious Toronto chefs to make use of restaurant spaces on these traditionally less popular nights of the week. Now, Mondays and Tuesdays are the most exciting nights to dine out. These temporary restos appear one night and the next they’re gone. But don’t worry! They’ll be back next week –– same bat-time, same bat-channel.

Fat Choi on Ossington
The family-run Soos Restaurant has been serving up modern Chinese-Malaysian plates since 2014 when they opened shop on Ossington. But this summer, matriarch and chef Tricia Soo has turned the Monday and Tuesday service into a new dining concept called Fat Choi. Launched on June 4, Fat Choi delivers innovative plant-based pan-Asian fusion. Menu items include roti stuffed with Mamak-spiced chickpeas and onion and an impressively true-to-taste spin on Peking duck, with tofu skin wrapped in a scallion pancake. Their sloppy Jack alone is worth the Monday trek to Ossington: It’s barbecued jackfruit, kimchi and sambal aîoli stuffed in a deep-fried mantou, resulting in a crispy-spicy-saucy (and oddly meaty) sammy so good you’ll want to don a pair of pastel coloured shorts, join the hipsters on the west side and invest some capital into this concept so you can dine on it every night of the week. The family hopes to open a stand-alone Fat Choi restaurant in 2019. ‘Til then, it’ll remain Ossington’s best-kept Monday-Tuesday secret.
94 Ossington Ave.

Soba comes to Bloor
Sure, you think you’ve had soba noodles before, but have you really had soba noodles before? Widely known as Canada’s premiere soba master, Ted Iizuka has been making soba noodles on Tuesday nights at Ichiriki Japanese Restaurant since 2009. Iizuka personally selects organic buckwheat from fields in Manitoba, cleans and mills the buckwheat into flour himself, mixes the dough by hand and cuts it into long, thin noodles using a special knife. The soba ends up tasting and feeling remarkably lighter and less gummy than the dried prepared noodles one usually associates with soba. It’s served the same day it’s made, on a bamboo plate alongside a broth of soy, bonito and mirin for dipping. But, alas, such tenderly handcrafted things were not meant for daily consumption (unless you live in Japan, of course). In Toronto, find it at Ichiriki on Tuesday nights.
120 Bloor St. E #103

K.Dinners hits the Danny
Chef Ken Yau, whose resumé boasts time spent at the three-Michelin-starred Fat Duck in the U.K. as well as Scaramouche closer to home, started his Monday night dinner series — K.Dinners — in September 2017. He brought his fine dining chops to Fiorentina on the Danforth, where he doles out a 13-course tasting meal for up to 16 guests at a time. The dinners are BYOB (guests get wine pairing advice from a sommelier ahead of time). Courses include artfully arranged morsels of Nori steak tartare and fish skin, and lumpfish caviar and clams. Yau does the prep and cooking himself, only relying on assistance from one server and artisanal bread from Matthew James Duffy (formerly of Café Boulud). The dinners are fully booked until 2019, but interested patrons can call Yau directly to get on the waitlist.
463 Danforth Ave.

Had the pleasure of attending a tasting created by @k.dinners, a pop-up dining experience every Monday night at the Florentina on the Danforth! . Featured here is the fish skin dusted with salt and vinegar sushi rice, served alongside with nori steak tartare 🐟 The crispy fish skin was very flavorful and balanced really nicely with the steak tartare! A phenomenal dish and visually stunning 😍 . Having worked previously at the Michelin 3-star Fat Duck in London and Melbourne, Chef Ken Yau is offering a very unique 13 course tasting menu for $100. Each dish is very uniquely and elegantly presented combining flavours from various regions throughout the world! . I will share some more pics from this fabulous tasting soon 😊 Thank you @lamjaeat and @k.dinners for the invite! . . . . . . #sponsored #kdinner #tastingmenu #torontoeats #yyzeats #tastethesix #blogto #steaktartare #friedfishskin #fusion #foodpics #foodporn #buzzfeedfood #huffpostgram #torontoinfluencers #to_finest #eeeeeats #toptorontorestaurants #myfab5 #finedining #delicious #foodtography #igfood #getinmybelly #foodie