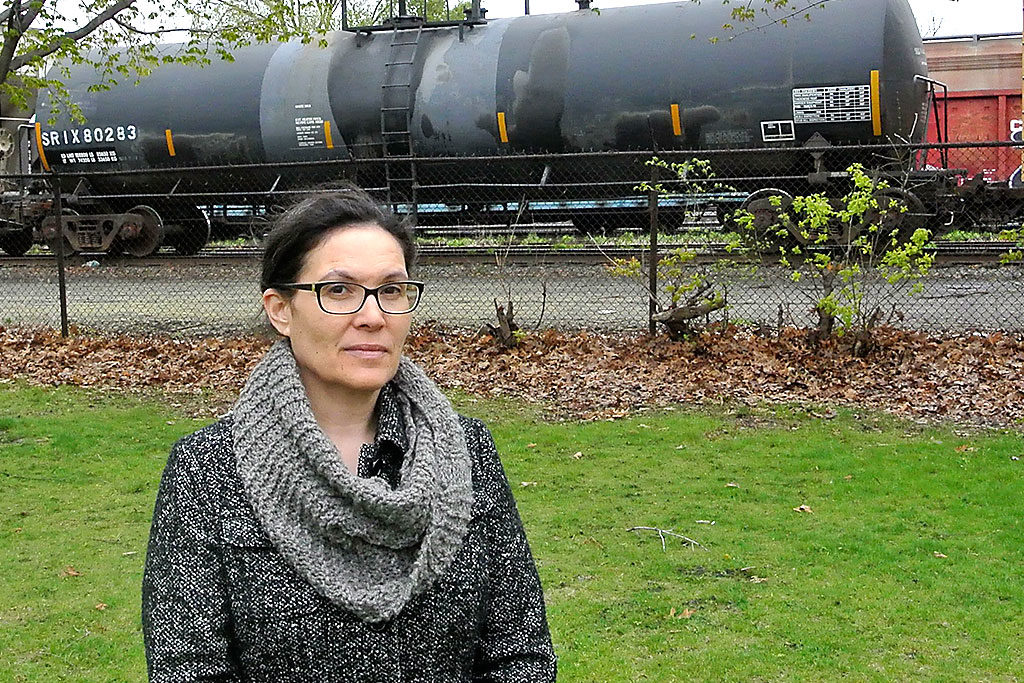 On Nov. 11 a train travelling through the city of Toronto derailed in the east end.

Toronto Fire Services arrived on the scene and immediately attempted to investigate whether or not any harmful chemicals had spilled.

Nobody was hurt and no chemicals were spilled. But the incident serves as the latest reminder that every day in Toronto trains carrying volatile chemicals pass straight through the middle of town. This includes oil trains, which have increased in frequency.

“It’s only a matter of time before something happens,” said Helen Vassilakos, one of the co-founders of the Toronto group Safe Rail Communities. “The government is sort of tinkering with a system that needs a complete overhaul.”

Last month, Alberta premier Rachel Notley announced that her government will purchase or lease thousands of oil trains to transport crude from her province to refineries and export terminals across North America.

She’s not alone. With the inability to get necessary approvals for the construction of new oil pipelines, such as Trans Mountain and Energy East, the use of trains to transport oil and associated volatile chemicals has skyrocketed.

And, of course, fears have only escalated since the 2013 disaster in Lac-Mégantic, Que., when 47 people lost their lives after a 74-car freight train carrying crude oil from Alberta exploded.

Hundreds of cars loaded with oil pass through the middle of Toronto on the same line as Lac-Mégantic and right alongside tens of thousands of residents.

“If there ever was a derailment that caused an explosion, that could affect a half a mile on either side of the tracks.”

“I’ve been advocating for several years along with midtown residents to see the government do meaningful action on rail safety,” said local councillor Josh Matlow. “We have some of the most dangerous materials, including crude oil. If there ever was a derailment that caused an explosion, that could affect a half a mile on either side of the tracks.”

Two years ago, 129,000 barrels of oil were transported by rail in Canada every day. Now, that number is closing in on 300,000, representing a more than 150 per cent increase and becoming a de facto backdoor alternative to pipelines without significant public input.

Moving rail by oil is considerably less safe and more expensive than traditional pipelines. And crude from the Alberta oilsands is that much worse as it has to be mixed with volatile chemicals before transportation.

In addition to creating a serious safety risk, moving more oil by train or pipeline facilitates further expansion of the Alberta oilsands, making it that much more difficult for Canada to meet its commitment to reducing emissions under the Paris Agreement on climate change.

What would you do if a train carrying oil, or worse, derailed down the street from your condo at Spadina Road and Dupont Street?

In 2016, it happened. There was a derailment on Aug. 21 of that year of a CP Rail train near the intersection of Dupont and Howland Avenue.

Although the incident was minor, it did reveal what not to do. Local residents came out of their homes en masse to investigate what happened and find out information.

“[After the 2016 derailment,] we were inundated with calls and emails. People actually ran out of their homes,” Vassilakos explained. “People did not know what do, and the city hadn’t been around to tell them. We spoke to the city, and they didn’t even have a protocol or resource for residents.”

Safe Rail Communities identified the gap, got a grant and spent a year and a half working on a rail safety tool kit for residents.

The safety kit contains suggestions related to emergency preparedness and getting ready to “shelter in place” at home.

According to the group Rail Safety First, relocation of the midtown Toronto CP Rail line was recommended by the Grange Royal Commission Report on the November 1979 derailment and explosion of a CP freight train in Mississauga. Other safety measures include decreasing speeds through urban areas and a conversion to safer rail cars.

“I am calling on the federal government to immediately see all of the dangerous Dot-111 cars [the type involved in the Lac-Mégantic tragedy] pulled from use and ensure, when crude oil is moved, that they are not on cars already known to be incredibly dangerous,” he said.

It is unlikely relocation will happen, according to Vassilakos, who is also concerned with development growth along Dupont.

In 2017, there was some controversy when a local developer wanted to build a mixed-use development right beside the rail line. The City refused the application based in part on safety concerns. It was appealed to the Ontario Municipal Board, and a decision is still pending

But there are plenty more such applications as Dupont has become one of the fastest growing stretches of road in the city for residential and commercial development.

“Of course we are concerned with more and more development happening around rail lines,” said Vassilakos. “It’s the city’s decision. The Federation of Canadian Municipalities guideline is 30 metres. But the city can just say no. It’s up to the city to decide.”