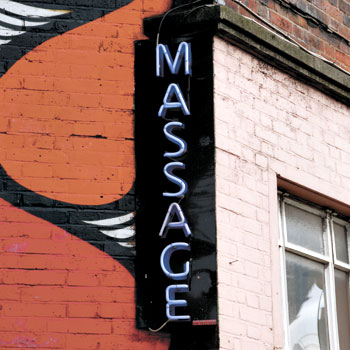 At first it’s hard to notice them. It’s easier to spot the café, the children’s clothing shop, the restaurant.

Illegal massage parlours are found in just about every neighbourhood in the city often masquerading as spas, holistic centres or even hair salons. But, hidden from view they are potentially offering a gamut of unlicensed and illegal services, including sex.

According to concerned local residents, the places are not only eyesores, but hotbeds for unsafe activity as well. The more that open up, the more it becomes a problem.

“Once your eye opens to them,you see them everywhere, whether you are driving along Eglinton or Bayview,” said Paige Cowan, owner of Canadian Wild Bird Co. on Mount Pleasant Road. “You look up above the stores and you see a shining light that says ‘massage.’”

Currently, the city caps the number of “body-rub parlours” it licenses at 25.

The city licensing rules state there can be no “offering, selling, giving, performing or soliciting of any service other than bodyrubs,” meaning no sex services. According to the city, a body rub is a massage that “does not include medical or therapeutic treatment.”

Cory Crawford, a constable with local 53 Division, said unlicensed establishments continue to operate outside the established rules and are difficult to police.

Tammy Kenward used to work as a receptionist at a licensed massage parlour and said before she was hired the owner evaluated her based on her looks.

She said parlours will hire a girl as a receptionist and then train her to be a masseuse.“A lot of them were really young and just kind of brainwashed into it,” said Kenward. “They would see how much money the girls were making, sometimes $500 a night.

They think it’s easy money; it’s not.” Moreover, even though it is illegal for girls to offer sex on the premises, Kenward said it would still happen.

“There were a couple of girls who were doing things they weren’t supposed to do,” said Kenward, in reference to the place where she worked. Many of the guys soliciting services were seedy and wanted more than they paid for.In some instances, she had to act as the bodyguard if someone started threatening one of the employees.“I didn’t really feel safe in that sense at all,”said Kenward.

While Kenward worked at a licensed massage parlour, there are even more parlours that operate without a license.

Cowan has owned Wild Bird Co. for nearly twenty years and said there have always been parlours in the area.

But she really started paying attention 10 years ago. “They started to stick out like sore thumbs,” she said. Over the years she has worked with locals, contacting councillors to have the places shut down.But, she said, efforts have largely failed. Today she can see several from her store. “At any one given time, within my view of the store there are like five of them,” she said.

Louis Ourique, the owner of Lolo Restaurant on Yonge Street near Briar Hill Avenue, said he too is surrounded by massage parlours. When a place does get shut down, such as a former parlour in the Castle Knock Road and Eglinton Avenue area, he said it is the exception rather than the norm.

While he worries about how the parlours affect the quality of a neighbourhood, he said he is more worried about the safety of the girls. “You have a woman alone in an apartment with an open door,” said Ourique. “Something will eventually happen.”

Despite these concerns, both legal and illegal massage parlours continue to operate.

According to Constable Crawford, only certain officers in Toronto are qualified to do undercover work in places such as massage parlours. Oftentimes they’ll wait to investigate until they have a lead, something to go off of.

Other times, they may investigate a parlour for bylaw infringements.

“The little bylaw stuff is easier to prove than criminal allegations,”said Crawford, who notes that often the fines are too expensive for the business to continue running.

However, one trend is making it even harder to investigate the illegal places: more and more parlours are opening up in condominiums.

“They seem to be moving into condo buildings and private residences,”said Crawford.

“People are complaining that they’re living across the hall from a massage parlour or brothel.”

Cowan said she is frustrated by what she calls a lack of police action in shutting down the parlours.

Although she said she does not approve of them, if they are going to operate regardless, then for the sake of the employees she would prefer them to be legal and licensed.

It may happen sooner rather than later. If a decision by Ontario Superior Court Justice Susan Himel is allowed, which will strike down laws restricting how prostitutes solicit clients, then bawdy houses — or places kept for prostitution acts — will become legal.

“I’m not an advocate,” said Cowan. “But if it is going to be condoned anyway,then I hope it can be legalized in a way that would make it safer for the girls.”