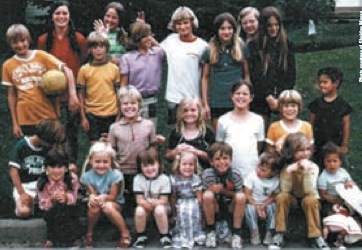 AH, SPRING! THIS time of year always takes me back to my childhood, with visions of brightly coloured rain boots splashing in mud puddles, pink worms wriggling their way through the tall dewy grass and, of course, street gangs.

I was a member of the Emerald Street Gang throughout most of the ’70s. Technically our turf was more of a crescent than an actual street, but the sound of a “cul-desac gang” doesn’t really turn heads. Our gang was made up of a gaggle of neighbourhood kids ranging in age from two to 16.

The Emerald Street Gang members didn’t sport leather or denim jackets. We didn’t carry knives or pack heat. But we did wear “play clothes” and carry footballs, skipping ropes and vast imaginations. We put hockey cards in our bike spokes to make noise. We played endless games of hideand- seek, tetherball and sardines that lasted until somebody ended up in tears. I still have a dent on the bridge of my nose where Matty Cooper’s black Converse sneaker kicked me during a wild game of British bulldog. It was the only time I’ve ever seen stars.

Times were less structured, technology was less inhibiting, and the Emerald Street Gang lived by one rule: it was time to go in when the street lights came on.

Back then, our parents didn’t track our every move via cellphone. We’d “call on” our friends by knocking on their front doors, not texting. When we were thirsty, we drank water from a garden hose, not a bottle. Car pools didn’t exist and neither did juice boxes.

My dad’s raison d’être was finding new “high-tech” gadgets to make life with nine kids easier. There was the K-tel “Patti-stacker,” which was considered to be a stateof- the-art kitchen breakthrough, guaranteed to make the perfect hamburger patty. And to cook this perfect patty, he bought an outdoor hibachi barbecue, which took nearly two hours for the coals to heat up. There was also the electric trash compactor, which minimized all our household waste by shrinking it into small square cubes.

As a parent today, I seem to take what was once considered “hightech” living by my dad for granted. I can contact my kid any time of day from anywhere. Computers, iPods and video games keep him seemingly safe indoors, but who knows what strangers or bullies can enter our home with the click of a mouse.

The question is, is raising a kid today all that different than when I was young? At a closer look, maybe parenting in the 21st century is not as different as we might expect. Instead of calling from a rotary phone to reach my son, I’ll send a text. And instead of going for penny candy like I used to, he’ll stop at Starbucks for a strawberries and cream. Quick dinners do exist in our house, not in the form of Swanson’s TV dinners, but with order-in Swiss Chalet.

A typical day for Spence in 2009 and myself in 1979 really doesn’t seem all that different when compared. Sure he sleeps a lot more than I did. Whereas I would be up watching Saturday morning cartoons in ’79, eating Life cereal and drinking Tang, 30 years later Spence will sleep through the morning and awake to Kraft Dinner at lunchtime. But we were both doing what we loved on this day off.

In 1979, my weekends “relaxing” were spent playing outside, running all over the neighbourhood with the other kids in the gang. In 2009 my son will relax on the weekend by watching SportsCentre and playing ministicks with a buddy.

In the ’70s, my mom would yell to me from downstairs, with smoke wafting out of the kitchen, to let me know that the stovetop popcorn was ready. Now I’ll call Spence’s cellphone from the kitchen to let him know the popcorn is sitting in the microwave waiting for him. And when it comes down to it, we both kissed our moms good night!

At the end of the day, parenting in 1979 and 2009 isn’t that different after all. We want the same things: to keep our kids safe, make them happy and, when possible, find “high-tech” ways to make life a little easier at home. Maybe life with the Emerald Street Gang isn’t so different from my son’s online world or organized sports.

As Teddy Roosevelt said, “Do what you can, where you are, with what you have.” As kids, we don’t appreciate how much our parents do for us until it’s too late. I called my mom this morning to give her props, and maybe you should, too. And to my dad, thanks for letting me play until the street lights came on, sorry for laughing at you for trying to be environmentally friendly with that crazy trash compactor and may you always enjoy the perfect hamburger up there in that great Patti-stacker in the sky!