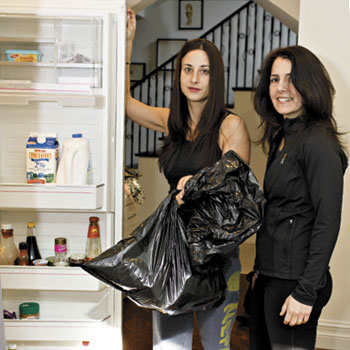 THOUGH I HAVE neither a drug nor alcohol problem, I needed rehab. Thankfully, it didn’t involve a treatment centre. The program I went through took place right in my kitchen.

Thanks to the recently opened eMbody Fitness, the latest craze in Toronto is kitchen rehab.

What is kitchen rehab? Basically, a professional comes into your home, goes through all your kitchen cupboards, fridge and drawers and will tell you what you’re doing wrong. Then, they’ll even go grocery shopping with you.

Debra Basch, director of nutrition and a certified personal trainer, came up with the concept.

“I realized I had to go to the scene of the crime,” Basch explains when asked why the program has taken off. “There was a big disconnect from what I was telling my clients at work to what they were doing at home.What I told them to eat and how they interpreted it was completely different. So now I go to where the crimes take place, which is in the kitchen or the grocery store.”

I welcome Basch, feeling like I should have cleaned my kitchen cupboards as I tend to do before the cleaning lady shows up, but I didn’t have time. Am I embarrassed? (She’s right. I’d rather she say, “You wear that?” than, “You eat that?”) First, Basch asks what my goals are. I moan about lack of energy, even when I work out.

Clients sign up for kitchen rehab for many reasons, including weight loss, high cholesterol, fibre and diabetes. Though as embarrassing as this is, Basch makes it easy by cracking jokes. “This is like a purge party but not the type you’d do in university.”She laughs.

Basch explains that many simply fall prey to marketing or continue to buy foods they’ve grown up knowing. She opens one of my cupboards, glances in it and shoots me a look.

“You promised not to judge,” I plead. But how could she not judge the packages of crackers, Oreo cookies, maple and brown sugar oatmeal, Kraft Dinner?

She tells me certain foods should be thrown out immediately, such as packages of chicken noodle soup, after showing me the sodium level, which is off the charts.

Basch is used to this kind of resistance. “A lot of people say that it’s a waste of food to just throw it out. I ask them,‘Would you rather throw it in the garbage or do you want garbage in your body?’”

I see her point. Especially when it comes to my daughter. Basch has looked at the frozen pancakes and announces, “You might as well feed her three cookies.” But she’s not just a drill sergeant.

She’ll organize your cupboards into sections such as the “OK to eat any time” section and the “once in a blue moon” section.

After 20 years of personal training, Basch has become a local celebrity, so much that, when she grocery shops, people will look in her cart.

“They’ll say, ‘You buy chips?’And I’ll be like, ‘I’m not the only one in my family.’ Hopefully, everyone in the family is eating healthy, but we don’t have to be so hard on our children. It’s about moderation.”

Basch will also look at your dishes. “These are all clues,” she says, like she’s a detective.

“A lot of people don’t understand portion size. They’ll say, ‘But I only eat one bowl.’ I’ll look at their bowls and I’ll show them that, yes, they may only be having one bowl of cereal, but that bowl fits five servings.”

She explains how much should be on your plate (half a large plate should be veggies, a quarter starch, a quarter protein.)

“People need to see the visuals to understand,” she says, drawing an invisible line on my plate.

She asks to look at my wineglasses, and shows exactly how much wine one should drink. (This one hurts — why would I even bother?)

“They have food that will last forever,” she explains. “Food that can last forever is not healthy, obviously.”

According to Basch, planning and organization is half the battle, and that is why having a shopping buddy can be helpful. If you’re like me and hate looking at boxes and figuring out how much sugar, sodium or carbohydrates are in everything you purchase, Basch can be a handy person to have cartside.

“So when we go grocery shopping,” she says, “I can point out what other options for crackers are available.” Basch will go with you to any store (meaning, she’s not going to drag you to a health food store. Loblaws is just fine.)

The cost is $185 for kitchen rehab, which usually takes an hour and a half. If you want a grocery shopping buddy, it’s an extra $185. “It’s good to do once every season,” Basch says.

At the end of our visit, she says, “Now I understand why you have low energy. You’re basically eating sugar all day and then you crash.”

We head to the grocery store, leaving behind a trash bag full of discarded food. I tell her how mortified I am. “Listen, I always tell people,‘I’m here to help.’ I’m not here to leave and say, ‘Oh, that Eckler eats this.…” Thank God for that.