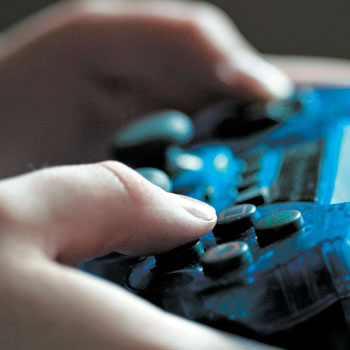 Now, after The Winter That Wasn’t (I’ve lived most of my life in Toronto, and that was the first year we didn’t have a single major dump of snow; it was weird), spring has sprung — or maybe it’s more accurate to say “summer has struck.”

(An ongoing meteorological anomaly of Toronto living: spring lasts, like, a week.)

The flowers are in bloom, and robins are hopping around the park near my house, searching for worms. The Blue Jays are in the ballpark, digging deep and swinging for the fences — and hope springs eternal: maybe this season they’ll be the first Toronto sports team in a long time that surprises fans by not being a crushing, grinding disappointment.

Uh, what else? Sun’s out, parkas are off, miniskirts are on (yay!), the streets are full of people shopping, walking, biking — generally mingling about, shaking off the winter cobwebs, copping some vitamin D and fresh air while the copping’s good.

Don’t get me wrong. They play ball hockey in the alley. They take guitar lessons and piano lessons and swimming lessons and basketball lessons. They play ice hockey. This March break, they went skiing. My oldest does drama and has even been in a professional play. And after the book Tiger Mom came out, their mother and I issued a decree: no TV or video games during the week — and “during the week” eventually came to be defined as from Sunday evening to Friday morning.

On a Saturday, in order to finally get them out of the house, I might take them to see a movie. They play video games up to the last moment, then we take off. When we get to the movie theatre, we’ll watch the movie, munch popcorn, have a good time, maybe go out (after stopping at the arcade in the lobby, incredibly) for a snack afterwards.

Then we’ll come home — and they’ll dive right back down in the basement and start playing video games again. Leaving me feeling defeated, deflated.… Their mom is better at cooking up stuff to do: skating excursions, trips to nature conservancies and so on.

But even she is more or less helpless against the dive back into the basement when they get home. And, anyway, that’s not the point. The point is that, if left to their own devices, they would stay down there for eight solid hours or more, in their pyjamas, emerging only for food and drink.

Everything else we have to dream up. And I confess, it’s the one aspect of parenting I’ve always found daunting, even a little onerous. I mean, I never minded the losing sleep or changing diapers or shelling out the money or the worry or even that my career took a hit, for a while.

But it’s this having to be entertainment director, like a guy on a cruise line, that’s got me down. On top of earning a living, keeping house, paying bills, shopping, cooking, filling out forms (I have three kids in three different schools, and, man, are their teachers filling-out-forms happy: I mean, can’t they just take a kid’s medical/contact information once and keep it on file? Why do I have to keep regiving it to them every time there’s a field trip?), I just lack the time and, frankly, often, the energy to keep coming up with fresh stuff for the kids to do all the time.

Was it ever thus? I wish I remembered my childhood more clearly. I certainly remember being shooed out of the house and being told to come home when it got dark. I remember epic, Homeric games of hide-and-seek and “kick the can” — anyone? I remember the game but not the rules … it was something like if you kicked the can before the kid who was “it” tagged you, he still remained “it” or something — and ball hockey and even “kissing tag.” And this all took place outside, of course.

But I also remember staring pinwheel-eyed at the TV with my brother and sister for hour after hour, until my mother’s crackling voice came over the intercom: “Kids! Dinnertime!” (I want one of those intercoms now. I’m tired of yelling.)

Then one day, fed up at our zombification, my father finally unplugged the family set and locked it in the basement. Seriously, he put it in a room with a padlock, down there. (Is it my imagination or did my brother and I, desperate for our fix, try to pick that lock?)

And then, out of sheer boredom, I began to read, at first reluctantly, then avidly, then voraciously. One thing led to another, and I wound up, for better or worse, becoming a writer. In a sense, my father’s decision to lock the family TV in the basement was the defining moment of my life.

Maybe I should get all Tiger Dad and do the same thing to my kids’ Xbox — or whatever the heck it is.