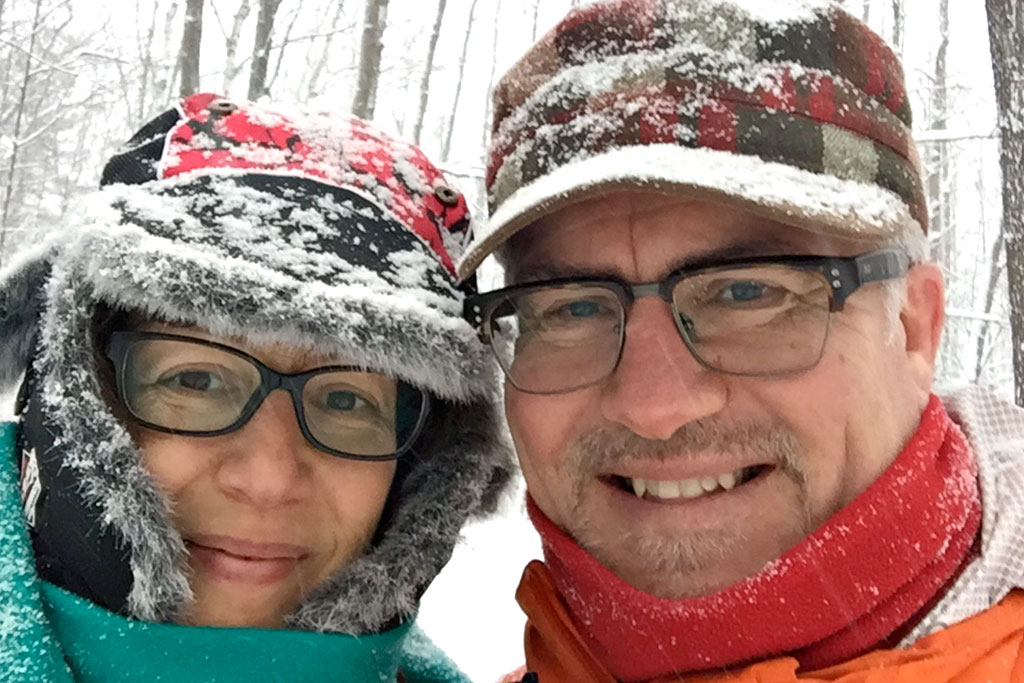 Second City veteran and Canadian Comedy Award winner Neil Crone has been gracing television screens since the 1990s in favourites like The Red Green Show and Little Mosque on the Prairie. His latest role has him starring in CBC’s new sci-fi series Endlings, airing Sundays at 6 p.m. starting Jan. 5.

Here, we caught up with the actor to chat about how he met his fiancée Kathryn Kelly and what they’ve got planned for their wedding.

We met in 2011 at a get-together thrown by mutual longtime friends.

We are both dog lovers, so Kathryn suggested a walk in a nearby conservation area. It was wonderful. We walked and talked for hours — one of those connections where you both feel an immediate chemistry.

But the real litmus test came later as we sat on the tailgate of my hatchback with Owen, my Great Dane/Labrador cross, sitting between us. As we sat there and chatted, Owen leaned in and kissed Kathryn 11 separate times. He never kisses anyone. That’s how I knew there was something special about this woman.

We’ve always been outdoorsy people. When we were first dating, we used to love to travel to Kathryn’s aunt’s cottage near Minden, Ont., in any season. We would sometimes drive up just for the day.

One particularly lovely moment was on a frigid February day. We didn’t even go into the cottage on this trip but instead made a fire down near the lake. We had a bottle of red wine chilling in a snow bank, and we were nibbling on dark chocolate with the dogs curled up near us. If you can find someone who’ll do that with you, hang on to them.

One of our favourite places to walk with our dogs is Thistledown [Pet Memorial] in Uxbridge, Ont. The place is incredibly beautiful with acres of trails through a forest. I have a knee that can give me trouble sometimes, and on this hike, I deliberately fell behind a bit until Kathryn came to see how I  was feeling. I told her I just needed to rest my knee, dropping down on one knee as I said it. She said, “Is there anything I can do for you?” I said, “Yes,” as I pulled out the ring. “You can marry me.”

Water is a big part of our lives. That’s why both of the homes we’ve lived in have either been on or near a lake. We moved to Wasaga Beach in May, and we would love to be married on the beach — barefoot. It’s a place that brings us so much joy and peace and connection to the planet. We haven’t confirmed a honeymoon destination yet. Although I have a feeling Paris looms large — or Keswick — depending on the hotel rates.

We are a happily blended family. I have two boys, Duncan, 28, and Connor, 25. Kathryn has brought me the wonderful gift of a daughter in Ashley, 33.

Communication and laughter. We have a wonderful sense of play in our relationship and neither is afraid of acting goofy in front of the other. Kathryn has taught me how incredibly important it is to keep talking to each other no matter how large or small the issue. That’s not always easy for me. I grew up in a house where my parents never, ever argued or fought in front of us. But it’s a game changer. Talking is everything.

I don’t really ever plan on retiring. I’m hoping to die quietly in between takes on some set! I love my work. But I do see us somewhere warm and quite possibly on a big, beautiful boat and, of course, a dog or two in the picture.